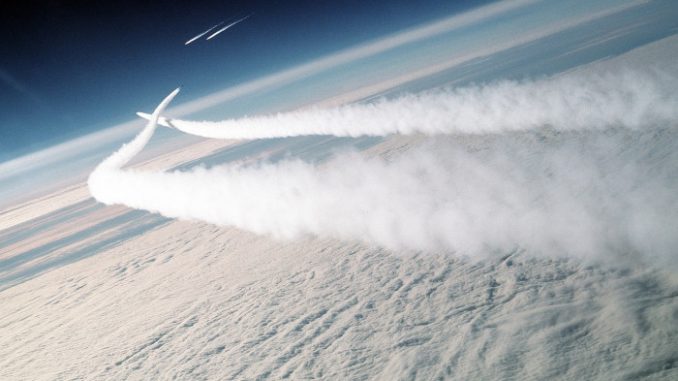 A $20 million Harvard University project will send aerosol injections up into the earth’s stratosphere, in the world’s biggest chemtrails experiment on the public to date.

Two US scientists say they hope to solve the problem of global warming by conducting the world’s biggest and most expensive solar geoengineering project within the next few weeks.

The aim of the program is to establish whether chemtrail technology can simulate the atmospheric cooling effects of a volcanic eruoption, in a desperate attempt to halt climate change.

“This is not the first or the only university study,” said Gernot Wagner, the one of the project’s co-founders, “but it is most certainly the largest, and the most comprehensive.”

The basic idea is that spraying certain types of particles into the stratosphere could help reflect more heat back into space. Scientists believe it could work because nature already does it. Large volcanic eruptions in the past have blasted tens of millions of tons of sulfur dioxide into the sky, which contributed to lower global temperatures in subsequent months.

What’s less clear is how precisely the technique could control worldwide temperatures, what materials would work best, and what the environmental side effects might be. Notably, previous volcanic eruptions have also decreased precipitation levels in parts of the world, and sulfur dioxide is known to deplete the protective ozone layer.

Keith has previously used computer modeling to explore the possibility of using other materials that may have a neutral impact on ozone, including diamond dust and alumina. Late last year, he, Keutsch, and others published a paper that found using calcite, a mineral made up of calcium carbonate, “may cool the planet while simultaneously repairing the ozone layer.”

The balloon tests could provide additional insight into how these chemicals actually interact with precursors to ozone in the real world and offer additional information that could help refine their understanding of solar geoengineering, he says: “You have to go measure things in the real world because nature surprises you.”

Keith stresses that it’s too early to say whether any geoengineering technologies should ever be deployed. But he has argued for years that research should move ahead to better understand their capabilities and dangers, because it’s possible they could significantly reduce the risks of climate change. He stressed that the experiments would have negligible environment impacts, as they will involve no more than a kilogram of materials.

Funding for the initial experiments would come from grants that Harvard provided Keith and Keutsch as new professors. Additional funds may come from Harvard’s Solar Geoengineering Research Program, a multidisciplinary effort launching this spring to study feasibility, risks, ethics, and governance issues surrounding geoengineering. As of press time, it had raised more than $7 million from Microsoft cofounder Bill Gates, the Hewlett Foundation, the Alfred P. Sloan Foundation, Harvard-internal funds, and other philanthropists.

Geoengineering critics argue that the climate system is too complex to meddle with, that the environmental risks are too high, or that even talking about technological “fixes” could ease pressure to cut greenhouse gas emissions.

Only two known geoengineering experiments have been carried out in the open air to  date: University of California, San Diego, researchers sprayed salt particles off the coast of California as part of the E-PEACE experiment in 2011, and scientists in Russia dispersed sulfate particles from a helicopter and car in 2009. The so called SPICE experiment in the United Kingdom was quickly scuttled in 2012, following public criticism and conflict of interest accusations after several of the scientists applied for a related patent.

In an earlier interview, Jane Long, a former associate director at Lawrence Livermore National Laboratory, stressed that researchers moving forward with geoengineering experiments need to go to great lengths to ensure proper public notification, opportunities for input, and appropriate oversight, particularly if they’re relying on private funds. But she said it’s time to begin seriously studying the technology’s potential given the growing dangers of climate change.

“We should have started a decade ago,” she said. “It’s critical to know as much as we can as soon as we can.”