by Johnny Liberty, published on The Mind Unleashed, on November 10, 2015 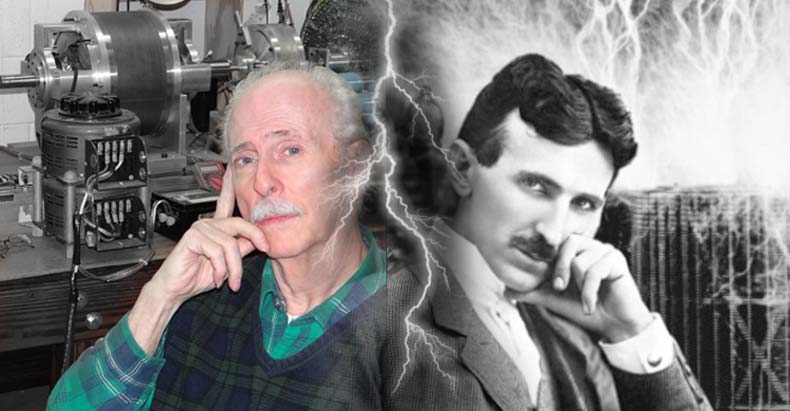 Jim Murray has been electrifying the world for over 50 years. His lifetime of experience has produced dozens of patents, inventions and now a truly remarkable discovery that can fundamentally change the way that human beings use energy forever.

When he was just five years old, Jim tells the Free Thought Project that he had already developed an affinity for motors and electricity. This curiosity was piqued by his father’s model train sets which Jim spent hours tinkering with. His natural gift and childhood passion fostered the creation of his first electromagnet when he was only six years old.

Over the next several years, Jim allowed his intellectual curiosity to carry him into multiple fields. He studied and built rockets and radios when he was in grade school and by the time he entered high school had developed an interest in nuclear physics. This led Jim to the construction of a linear electron accelerator, which was entered in the New England Science Talent Search of 1964.  This entry won young Murray first place in school, city and state science competitions. Additionally, his project was displayed in the Boston Museum of Science.

It was not long after graduation that Jim began seriously examining the work of Nikola Tesla. He was fascinated by Tesla’s incredible claims concerning power generation and transmission, and he vowed to rediscover the great scientist’s undisclosed secrets. Jim’s efforts eventually led him to individuals like Otis T. Carr, who claimed to have known Tesla personally. They also gave him a greater understanding of several lost Tesla secrets.

During his professional life, Jim has conducted research and experimentation on a variety of different technological applications all of which eventually contributed to the development of his SERPS (Switched Energy Resonance Power Supply) device.  This highly specialized electronic circuit has the ability to “Magnify” the effective power applied to it by nearly 50 times. When Jim coupled his device with his friend Paul Babcock’s patented ultra fast 5 nanosecond switching technology, they achieved a 4790% increase in electrical power compared to the input. This type of performance, if commercialized, would cause the largest electric utility companies to shake in their boots.

“Electric power is supplied by a special transformer to energize a resistive load. The undissipated  magnetic potential is then captured and stored temporarily, before being sent back to the source through the very same electrical load. This oscillating power has completely different properties than conventional electrical power, and actually reduces the total power required from the source.  The consequence of this energy dynamic is that the resistive load can be powered more than twice as efficiently, while the net power supplied by the line is reduced to a very small value. The implications of this technology for power conservation in the future are absolutely astonishing!”

In the video below Jim gave The Free Thought Project an exclusive look at his groundbreaking new technology.

After watching this amazing innovation in action, it is hard to believe that Mr. Tesla reached this same technological plateau nearly one-hundred years ago, and still, there has been minuscule advancement, until very recently, in the industry of energy generation. One need only examine the contents of Tesla’s patents to understand why the famous scientist was being watched by the FBI. It is no secret that after Tesla’s death in 1943, government agents seized much of his private research.

Jim’s research has also been scrutinized by the FBI. He tells The Free Thought Project that he, too, has had a run-in with the FBI because of one of the projects he was working on.

“Back in 1966, not long after my father died, I returned from work one day to find a strange message waiting for me.

When Jim attempted to ascertain the source of the message he was given a note that said:

‘Take the Hudson-Manhattan subway to Newark, New Jersey, and arrive at 11 Centre Place, FBI Newark Headquarters, no later than 10:00 AM tomorrow morning. Ask to see Agent Harold Miller, he will be expecting you.”

Upon his arrival, agents began questioning Jim about his research. After informing them of his interest in Nikola Tesla’s work, Jim says:

“The agents looked at each other silently, then scribbled some additional notes, which were inserted into a file folder with my name on it. I later learned that once you become a person of interest, the FBI retains your file indefinitely!”

Thankfully Jim did not let this obvious scare tactic deter his research. Now, thanks to modern technological advancements and the tireless work of courageous men like Jim Murray, we can begin to understand the truly groundbreaking nature of Tesla’s original work.

The ramifications of the mass application of SERPS technology are nothing short of paradigm shifting. It is widely known that the “energy variable” is a primary factor in US policies. The pursuit of energy is no doubt a catalyst for many of the decisions politicians regularly make. However, most Americans are only aware of the research efforts which involve the utilization of coal, petroleum, nuclear power, wind and solar. These accepted avenues of exploration receive over 5 billion dollars in subsidies per year, while independent researchers like Jim are totally ignored.

The positive environmental impact of radical technologies like SERPS also cannot be understated. While lawmakers continue to pay lip service to the issue of global warming, this technology could drastically reduce the carbon footprint of the entire planet. Mountaintop coal removal is destroying entire swaths of land, oil sands developments are already slated to be the cause of up to the second fastest rate of deforestation, and hydraulic fracturing for oil & natural gas can require up to 15.8 million gallons of water per well.

In 2012, the total energy output from wind power alone in the US surpassed 60 gigawatts, enough capacity to power nearly 15 million homes. While renewable energy sources such as wind, solar, and hydro have been widely criticized as being inefficient to meet the nation’s energy demands. The obvious truth is that through the use of technologies like the SEPRS device, we can more than meet our energy needs.

So long as organizations exist that can legally ensure the suppression of emerging technologies, the best interests of the people will always run secondary to the interests of those who have controlling ownership in traditional power systems. The same systems which ensure cash flow to the elite and continue to destroy our planet in the process.

In addition to re-discovering Tesla’s technological secrets, Jim is also dedicated to revealing those secrets for the benefit of everyone.