ouse Judiciary and House Oversight and Government Reform Committee members grilled embattled, anti-Trump FBI agent Peter Strzok behind closed doors on Capitol Hill Wednesday, as he attempted to explain his vehement bias against President Donald Trump, his senior role in the alleged Trump-Russia collusion investigation, and the exoneration of Hillary Clinton for her use of a private server while she was Secretary of State.

Strzok, who evaded a subpoena from House Judiciary Committee chairman Bob Goodlatte (R-VA), voluntarily appeared at the hearing. Thousands of Strzok’s anti-Trump text messages, which he exchanged with former FBI lawyer and his paramour, Lisa Page, sparked anger from Republicans (and criticism from some Democrats) who contend that senior members of the FBI utilized their power and political leanings to target Trump both before and after the 2016 election.

Freedom Caucus & Judiciary Committee member, Matt Gaetz (R-FL) attended today’s deposition and reacted to Strzok’s testimony, telling the Sean Hannity Radio Show, “… I am shocked at the lack of curiosity with Robert Mueller. I mean Sean, if you were in Mueller’s shoes, and you had found these text messages, I would think that you would want to ask whether or not they impact the investigative decisions that were made, whether there was bias, whether there was contact with other members of the FBI regarding the investigation and where it was going and who was making the critical judgment calls,” the Florida Congressman said. “I just cannot believe the lack of curiosity on the part of Robert Mueller. It was the strongest reaction I had today from Peter Strzok’s testimony.”

Freedom Caucus member, Rep. Ron DeSantis (R-FL)-who was also in attendance- told SaraACarter.com, “It was a waste—Strzok is full of it and he kept hiding behind [the] classified information excuse.” 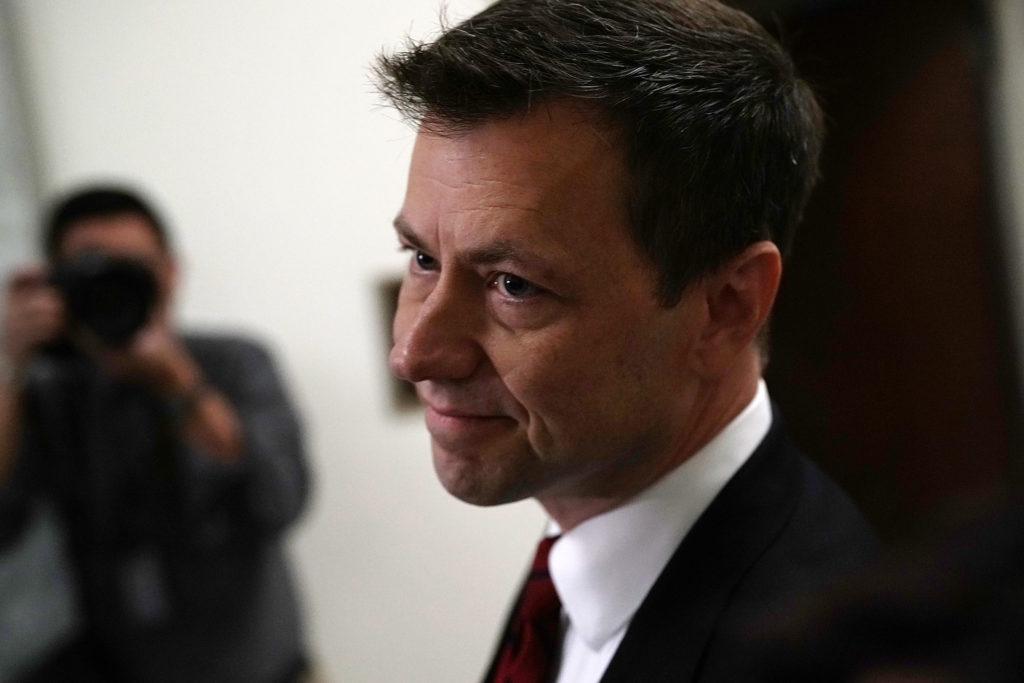 WASHINGTON, DC – JUNE 27: FBI Agent Peter Strzok arrives at a closed door interview before the House Judiciary Committee June 27, 2018 on Capitol Hill in Washington, DC. Strzok, a former member of the Mueller Russia investigation team, is being interviewed by the committee on text messages exchanged with former FBI lawyer Lisa Page during the Clinton e-mail server investigation that are claimed by the President Trump’s supporters to show bias against the president. (Photo by Alex Wong/Getty Images)

Strzok, who was one of the bureau’s top counterintelligence agents against China and Russia, was escorted out of FBI headquarters shortly after Horowitz released his report. Attorney, Lisa Page resigned from the bureau after the text message fall-out and former FBI Deputy Director Andrew McCabe was fired just days before his retirement after Horowitz and the FBI’s Office of Professional Responsibility concluded he had lied about leaking information to the press numerous times under oath.

Other senior FBI officials have also been fired or resigned as a result of the fall-out from the ongoing congressional and Inspector General investigations.

“The hearing of Peter Strzok and the other hating frauds at the FBI & DOJ should be shown to the public on live television, not a closed-door hearing that nobody will see,” he wrote on Twitter Tuesday. “We should expose these people for what they are—there should be total transparency!”

The hearing of Peter Strzok and the other hating frauds at the FBI & DOJ should be shown to the public on live television, not a closed door hearing that nobody will see. We should expose these people for what they are – there should be total transparency!

Rep. Jim Jordan (R-OH) who was at the deposition Wednesday, told saraacarter.com that Strzok should be back to testify at an opening hearing.

The Judiciary Committee tweeted on Tuesday, “Peter Strzok will be interviewed first in a closed-door deposition. There will be classified information to sort through before a public hearing is held. A public hearing will be held!”

Peter #Strzok will be interviewed first in a closed door deposition. There will be classified information to sort through before a public hearing is held. A public hearing will be held! @realDonaldTrump pic.twitter.com/Glltm1pBkn 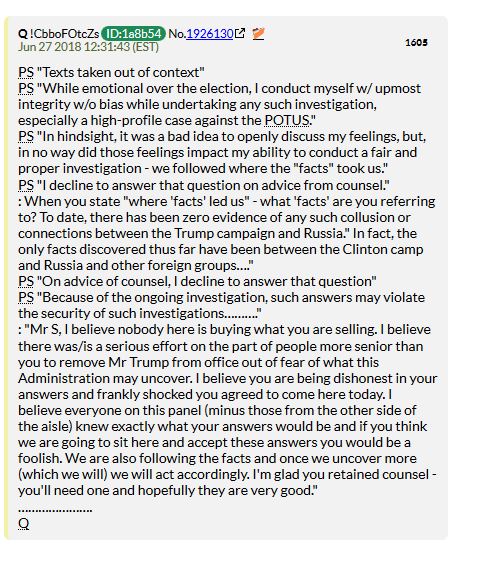