Green Bronx Machine, Growing Our Way Into A New Economy 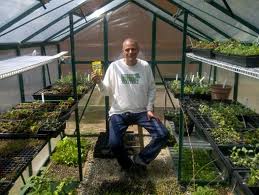 Green Bronx Machine, Growing Our Way Into A New Economy

Stephen Ritz is a South Bronx teacher/administrator who believes that students shouldn’t have to leave their community to live, learn and earn in a better one. Moving generations of students into successes they never imagined while reclaiming and rebuilding the Bronx, Stephen’s extended student and community family have grown over 30,000 pounds of vegetables while generating extraordinary academic performance.

His Bronx classroom features the first indoor edible wall in NYC DOE which routinely generates enough produce to feed 450 students and trains the youngest nationally certified workforce in America. His students, traveling from Boston to Rockefeller Center to the Hamptons, earn living wage en route to graduation. Stephen has helped fund/create 2,200 youth jobs, captured the US EPA Award for transforming mindsets and landscapes in NYC, recently won the ABC Above and Beyond Award and the 2012 Chevrolet National Green Educator Award, helped earn his school the first ever Citywide Award of Excellence from the NYC Strategic Alliance for Health and attributes these results directly to growing vegetables in school.

His speech at Columbia University, “From Crack to Cucumbers,” along with the release of a You-Tube Video (Urban Farming NYC) resulted in a national following including an invite to the White House Garden. Recently dubbed the Pied Piper of Peas by Lorna Sass, Stephen has just launched Green Bronx Machine to a national audience and has signed on over 5,000 local followers in several months.

Stephen was just announced as a national Green Apple Education Ambassador for the US Green Building Council and is working on embedding the concepts of sustainability and environmental justice into K-12 programming and beyond. Dedicated to harvesting hope and cultivating minds, Stephen dreams of opening a nationally replicable Career Technical Education public school in the poorest Congressional District in America rooted in urban agriculture, green and sustainable initiatives.