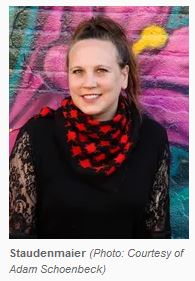 by Paul Srubas, published on he Green Bay Press Gazette, on June 8, 2020

GREEN BAY — From Brenda Staudenmaier’s perspective, ending the fluoridation of drinking water ought to have been the easiest problem in the world to solve.

“Unlike other issues like leaded water pipes and asbestos, all one has to do with fluoride is have their utility stop spending money on the toxic waste hydrofluorosilicic acid and unplug the dosing pipes,” said Staudenmaier, 41, a mother and an environmental activist who splits her residency between Madison and Green Bay.

It turned out to be no simple matter at all. It’s now the subject of a federal lawsuit in a trial that is to begin today in U.S. District Court in San Francisco. Staudenmaier is party to the lawsuit, which seeks a nationwide ban on adding fluoride to drinking water.

Fluoride is harmless to health and helps stave off tooth decay, say the dentists.

Green Bay Water Utility, which fluoridates its water, says it will continue to do so at the recommendation of the CDC and other health agencies.

Groups like the Children’s Health Alliance of Wisconsin say there are no reputable organizations from the medical or dental fields that oppose water fluoridation.

The CDC calls the use of fluoride in the nation’s drinking water one of the 10 great public health achievements of the 20th century, because of its contribution to the large decline in cavities in the United States since the 1960s, according to the CDC’s website.

“Hydrofluorosilicic acid is an industrial chemical sourced from phosphate fertilizer industry smokestacks, where it is a byproduct that must be disposed of as hazardous waste if there is no industry use for it,” she said.

Staudenmaier always had a taste for environmental activism but became interested specifically in fluoride after befriending a man who was dying of bone cancer and learning that some studies linked the disease to fluoride consumption among boys of a certain age.

“My son Hayden, who is also one of the plaintiffs in our current case, was in the age bracket,” she said. “I had my own health issues with asthma and allergies, and many sources said to avoid fluoride water and toothpaste, so it struck a chord with me.”

Staudenmaier works in the water industry, with Madison Metropolitan Sewerage District, and also works at Galley 57 in Bellevue on weekends.

She’s convinced the chemical causes not only bone cancer but neurotoxic brain damage that is behind the need for special education programs and behavioral issues in children.

And she’s not alone. She is among several individuals and advocacy groups including the Fluoride Action Network who launched the federal lawsuit.

The group at first presented a petition to the U.S. Environmental Protection Agency to prohibit the use of fluoride additives to public drinking water. When the EPA refused, the group sued.

This is not another example of anti-science vs. science, according to Chris Nidel, a Washington D.C.-based lawyer and a member of the legal team fighting the EPA in court next week. Likening anti-fluoride activists to the anti-vaccination movement is offensive, he said.

Staudenmaier and the other plaintiffs don’t oppose science; they claim science supports their view that fluoride is a neurotoxin, harmful to thyroid, brain, and bone, Nidel said.

While the CDC claims the best available scientific evidence over the last 70 years indicates community water fluoridation is safe, Nidel and the plaintiffs in the case say much has been discovered in the last 15 or 20 years indicating otherwise.

“We can have different scientific opinions based on the evidence, but we have to look at the evidence,” he said. “The EPA hasn’t taken a hard look at this evidence in 15 years, and there’s lots of evidence that has been accumulating over 15 years.

“To the extent that most people don’t pay attention to Pubmed and toxicology literature, it may come as a surprise that fluoride is neurologically toxic in the range applied to community drinking water,” he said.

The plaintiffs also will argue whether fluoride in water really provides any benefit even to tooth health, Nidel said.

Dental experts may argue that dental health has improved throughout the world in the last 80 years, but that’s also been true in places that don’t fluoridate their water, Nidel said. Topical application of fluoride may or may not be beneficial, but “the concept of giving it to infants to ingest is of zero benefit,” he said.

The two-week trial is scheduled to begin today in U.S. District Court for the Northern District of California in San Francisco. It will be a bench trial, meaning it will be decided by a judge, not a jury.

Thanks to the coronavirus, Staudenmaier won’t be attending.

“It will all be done through Zoom and YouTube livestream,” she said. “I do not need to testify. We have a Harvard professor and some other university professors who will testify – leading experts on neurotoxicity.”