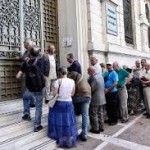 National Bank of Greece declined to buy bonds from the euro zone’s bailout fund in a sale on Tuesday because of Greece’s capital controls, bankers said, a sign of the country’s financial isolation.

NBG is one of 39 dealer banks the European Stability Mechanism routinely uses to help distribute its bonds.

The banks, called the Market Group, underwrite the bonds and sell them on to investors in a process known as syndication. Banks earn a flat fee plus any margin they make in the process.

Sources at two dealer banks said that NBG declined when it was asked in an online chat forum to take part in Tuesday’s bond sale, citing the capital controls.

The bankers said it was very rare for dealer banks to decline an offer to participate.

Greece reopened its banks on Monday, three weeks after closing to prevent a collapse of the country’s banking system in a flood of withdrawals, but capital controls remain in place and the Athens stock market has yet to reopen.

The ESM — which is expected to increase its issuance of bonds this year to fund a third bailout for Greece — sold 2 billion euros of bonds maturing in October 2019 on Tuesday. (Additonal reporting by Lefteris Papadimas in Athens; editing by Alexander Smith, Larry King)