“After exhaustive research, the good news is that overwhelming evidence reveals that no children or teachers died at Sandy Hook two years ago. For relief, I have filed lawsuits against the media in US District Court in New Haven for Fraud and Terrorism. Here is an example of our abundant evidence, Exhibit D: The Connecticut State Police dash cams record no evacuation of children from school at critical moments: https://www.youtube.com/watch?v=rqcaaE6aFX8 — Smoking Gun evidence no children died at Sandy Hook.”

Attached is a photo staged by the Newtown Bee, a wider view of that action being staged on a different day that the emergency altogether, and a sampling of front pages that terrorized the world with the fake photo. 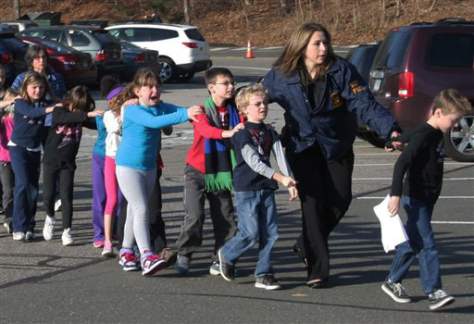 Mr. Shanley is the producer of The Made-for-TV Election starring Martin Sheen that analyzed media coverage in the tectonic Carter-Reagan election of 1980. He is also the author of books on quantum physics, including Alice and the Quantum Cat (2011).

Dr. James Fetzer, whose 35 articles on Sandy Hook for Veteran’s Today qualify him for the highest investigative journalism awards, and School Safety Consultant, Wolfgang Halbig, whose investigative expertise as a former Florida State Police officer, and loving attention as a former principal, makes this case’s particulars comprehensible to all, will be called as expert witnesses.

It is their scholarship and bravery that makes these Complaints possible for the shear breadth and scope and detail of evidence they have assembled. Hundreds of independent researchers have also made this day possible, and Mr. Shanley claims they will be tracked down and rewarded heartily for their bravery and mindfulness of America.

Defendants entered in a multi-year conspiracy, meeting in groups separately and together, to commit fraud and terrorism, i.e., to brainwash the public into thinking a lone gunman drill known as the “Sandy Hook Massacre” was real, when in fact it was a staged FEMA National Level Exercise Event that redirected government resources to terrorize the public. These crimes were undertaken with the intent of subverting the US Constitution and to affect national, state and local laws.  This fraud involved lying to the public, faking news, publishing one-sided news reports, censoring reality, suppressing facts, and deliberately skewing the news to shift public perceptions.

The true costs of this breach of integrity and trust to society are unfathomable. Instead of fulfilling their Constitutional Role as the People’s Surrogates and being honest brokers of information, the Plaintiff will show how the men and women who dominate the TV news industry in the United States broke laws, besmirched the First Amendment, their Constitutional role as government watchdogs, and forfeited the right to report the news, and thereby profit from news production and distribution. The sine qua non of journalism is the search for truth. Our Fourth Estate chose a different path. Punitive damages of one year’s annual revenue from each Defendant are being sought to establish a News Trust, that will free journalism and restore trust and integrity to our communications sources. A democracy cannot survive this tyranny over human consciousness.

The New York Times, the Associated Press, the Hartford Courant, and the Newtown Bee are being sued for 10 billion usd, punitive damages, in a separate Complaint.

A third lawsuit will be filed against Connecticut-based TV and print media soon.

A complete list of Defendants in this suit can be found below.

As Mr. Shanley is proceeding on a pro se en paupers basis, public support is welcome via PayPal to wbs2012@zoho.com.

(Comcast purchased NBC-Universal from GE in March 2013. NBC has eleven owned-and-operated stations and nearly 200 affiliates in the United States)

1211 Avenue of the Americas

1211 Avenue of the Americas

(CBS Station Group consists of 29 owned-and-operated stations, including 16 that are part of the CBS Television Network, eight affiliates of The CW Network, three independent stations and two MyNetworkTV affiliates.)

Executive Chairman of the Board and Founder

1120 Avenue of the Americas

3 Comments to “ Great News! No Children Died at Sandy Hook!”