by Louise Lerner, University of Chicago, published on PHYS, on September 14, 2018 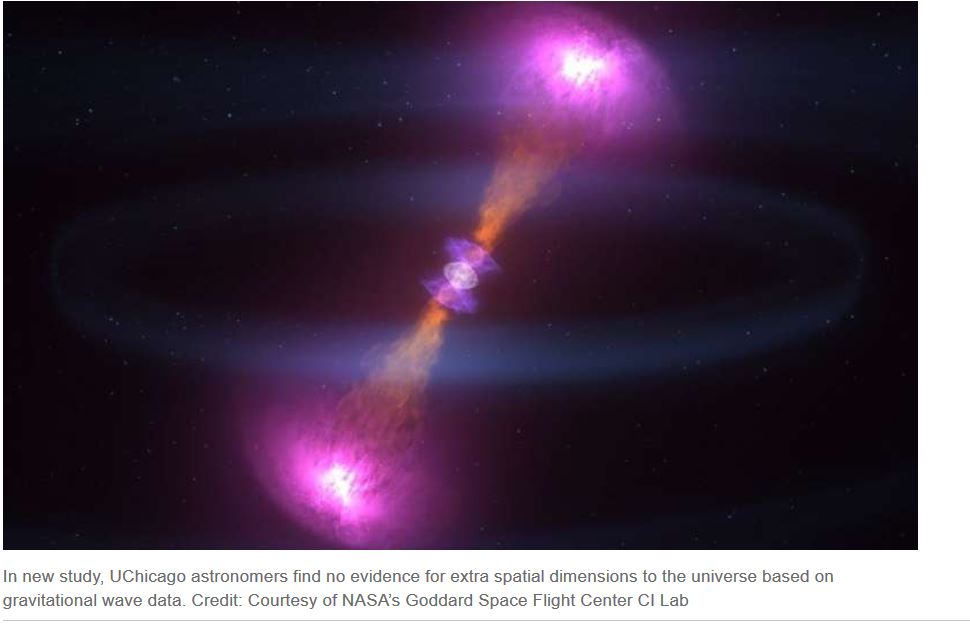 While last year’s discovery of gravitational waves from colliding neutron stars was earth-shaking, it won’t add extra dimensions to our understanding of the universe—not literal ones, at least.

University of Chicago astronomers found no evidence for extra spatial dimensions to the universe based on the gravitational wave data. Their research, published in the Journal of Cosmology and Astroparticle Physics, is one of many papers in the wake of the extraordinary announcement last year that LIGO had detected a neutron star collision.

The first-ever detection of gravitational waves in 2015, for which three physicists won the Nobel Prize last year, was the result of two black holes crashing together. Last year, scientists observed two neutron stars collide. The major difference between the two is that astronomers could see the aftermath of the neutron star collision with a conventional telescope, producing two readings that can be compared: one in gravity, and one in electromagnetic (light) waves.

“This is the very first time we’ve been able to detect sources simultaneously in both gravitational and light waves,” said Prof. Daniel Holz. “This provides an entirely new and exciting probe, and we’ve been learning all sorts of interesting things about the universe.”

Einstein’s theory of general relativity explains the solar system very well, but as scientists learned more about the universe beyond, big holes in our understanding began to emerge. Two of these are dark matter, one of the basic ingredients of the universe; and dark energy, the mysterious force that’s making the universe expand faster over time.

Scientists have proposed all kinds of theories to explain dark matter and dark energy, and “a lot of alternate theories to general relativity start with adding an extra dimension,” said graduate student Maya Fishbach, a coauthor on the paper. One theory is that over long distances, gravity would “leak” into the additional dimensions. This would cause gravity to appear weaker, and could account for the inconsistencies.

The one-two punch of gravitational waves and light from the neutron star collision detected last year offered one way for Holz and Fishbach to test this theory. The gravitational waves from the collision reverberated in LIGO the morning of Aug. 17, 2017, followed by detections of gamma-rays, X-rays, radio waves, and optical and infrared light. If gravity were leaking into other dimensions along the way, then the signal they measured in the gravitational wave detectors would have been weaker than expected. But it wasn’t.

It appears for now that the universe has the same familiar dimensions—three in space and one of time—even on scales of a hundred million light-years.

But this is just the beginning, scientists said. “There are so many theories that until now, we didn’t have concrete ways to test,” Fishbach said. “This changes how a lot of people can do their astronomy.”

“We look forward to seeing what gravitational-wave surprises the universe might have in store for us,” Holz said.