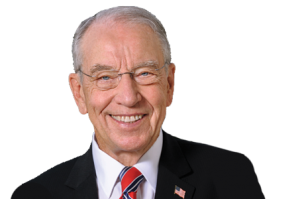 BUTLER COUNTY, IOWA – U.S. Sen. Chuck Grassley (R-Iowa), a senior member and former chairman of the Senate Judiciary Committee, is calling on the Justice Department to grant access to newly disclosed material related to the FBI’s handling of its case against Lt. Gen. Michael Flynn. The high-profile case has prompted questions about the investigative and legal tactics used against Flynn.

“Simply stated, after years of rampant speculation and publicly reported inconsistencies regarding how the FBI handled the case, it’s time for the public to know the full set of facts relating to Lt. Gen. Flynn, including any and all government misconduct,” Grassley wrote in a letter requesting DOJ to unseal the records. At a minimum, Grassley urged that it be made available for congressional oversight.In December 2018, Flynn pleaded guilty to lying to investigators during a January 2017 interview regarding his contacts with Russians, however Flynn has since claimed that he was pressured into pleading guilty and was poorly represented by his former legal team. The new material, which Flynn’s attorneys have characterized as “exculpatory,” was relayed by the U.S. Attorney’s Office for the Eastern District of Missouri, which was recently tasked with reviewing DOJ’s and FBI’s handling of the case. It’s currently shielded from disclosure by a protective order.
Grassley first sought details surrounding Flynn’s 2016 contacts with the Russian ambassador in a joint letter with Sen Dianne Feinstein (D-Calif.) in February of 2017. Grassley, then Chairman of the Judiciary Committee, delayed confirmation of Deputy Attorney General nominee Rod Rosenstein in order to secure the requested briefing, which he and Feinstein received on March 15, 2017. In that briefing, then-FBI Director James Comey told the senators that he saw no evidence that Flynn had lied to investigators, a point he later reiterated to the House Intelligence Committee. Comey also testified that he did not believe DOJ would charge Flynn.
In August of that year, Grassley called on the Defense Intelligence Agency to declassify information he had reviewed because it “would be in the public interest, and is in the interest of fairness to Lt. General Flynn.”
In a series of exchanges in 2018, Grassley urged DOJ to produce a transcript of Flynn’s phone call with the Russian ambassador and records summarizing the FBI’s interview with Flynn, which was conducted, in-part, by Peter Strzok and occurred without a lawyer present. Comey later bragged that he and then-FBI Deputy Director Andrew McCabe ignored the FBI’s interview protocol for high-level White House officials. Strzok was eventually removed from the investigation after his text messages revealed biases against the Trump presidency. The department rejected the request on the grounds that the public record in the Flynn case was sufficient. Later, Deputy Attorney General Rosenstein met with Grassley and suggested that Congress should be satisfied with the facts described in the plea agreement.
The newly disclosed material suggests that the FBI and DOJ may have possessed additional so-called “Brady material” that undermines its case against Flynn – material that should have been made available to his legal team prior to his plea deal. Text of Grassley’s request for transparency and a timeline of prior correspondence follow:
to download directly click here
2020-04-27 CEG to DOJ (Flynn)