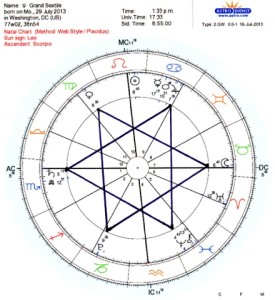 Grand Sextile of July 29, 2013: A Spiraling Vortex of Ascension for the Human Race

In astrological terms, a grand sextile is an extremely rare, six-pointed star, or hexagram, that forms in the heavens when six planets align, each approximately sixty degrees apart. When such an auspicious, archetypal symbol locks into position (like the tumblers inside the door of a bank vault falling into place), as happens in the early afternoon of July 29 (EST), it signals the opening of a window of immense opportunity (perhaps the opportunity of a million lifetimes) – a time of greatly accelerated evolutionary potential – for ourselves, our planet, our solar system and even our galaxy.

The living reality behind the sacred geometry of the grand sextile is known by many names and descriptions around the world, depending upon one’s cultural vantage point and level of perception. These include: the vehicle of ascension; the vector equilibrium; the double torus; the star of david; the yin/yang duality; the flower of life; the tree of life; the yab/yum; the hieros gamos; the sacred marriage of twin flames; the merkaba; the chariot of the gods; the chariot of fire; and the awakened soul, to name a few.

Our galaxy has its own vehicle of ascension, of course, as does our solar system, our planet, and every sentient being, including those of the human persuasion. The Tibetan Book of the Dead describes this vehicle as a body of light, which survives physical death, making transmigration through various realms and lifetimes possible. Without an activated light body, there would be no continuity of consciousness, no conscious movement through star gates or portals into higher dimensions of reality, no evolutionary leaps from 3D to 5D, and, ultimately, no evolutionary progress, at all.

In fact, according to Tibetan teachings, if a person’s light body is not sufficiently activated when encountering the pure light of awareness at the time of death, he/she will “swoon into unconsciousness,” abdicating free will in the process, until consciousness is regained and stabilized. Typically, our light bodies are only activated to the extent we manage to achieve the delicate balance of masculine and feminine energies residing within at a relatively high frequency. Think of the right and left hemispheres of your own brain (representing the embodied, holistic, intuitive faculties and the transcendent, linear, rational faculties, respectively) and how challenging it can be to manage a true and consistent balance between the two. This is a rare accomplishment, or at least it has been until NOW in the evolutionary scheme of things. The galactic harmonics represented by the grand sextile of July 29 could be a game changer in this regard, however.

Due to the presence of several astrological conjunctions on that day, the grand sextile manifesting in the sky involves a staggering ten “planets”: Saturn and the North Node on the Ascendant (karmic fulfillment of one’s destiny, catalyzing a profound rebirth); Pluto (deep transformation); Neptune and Chiron (mystical alignment to one’s higher calling); the Moon and South Node (the soul’s attunement to knowledge and wisdom acquired in past-lives); Jupiter and Mars (spiritual warriorship); and Venus (personal love and harmony with nature), all of which fall in feminine earth and water signs, further enhancing the graceful flow of the energies involved, while also providing the necessary grounding.

As the portal opens wide for your own particular journey of ascension on July 29, consider taking bold action on behalf of all beings who suffer, yourself included. And as you make that giant leap of faith into the unknown, in whatever way you feel guided, draw strength and courage not only from the spiraling vortex of energy represented by the six-pointed star formation described above, but also from the knowledge that this very day was recognized as a window of ascension by ancient Mayan astrologers, as well, who long ago gave it the designation AHAU #3.

The star glyph AHAU is the highest of all Mayan soul codes. It’s associated with union, wholeness, awakening, enlightenment, unconditional love, solar mastery, Christ consciousness, the language of light, ecstasy, limitless bliss, and the crown chakra. Synchronistically, the #3 is characterized in the Mayan system as the galactic heartbeat of creativity, associated with movement, change, flow, current, integration and the sacred trinity. The overall message of AHAU #3, then, pertains to the fluid movement of ascension facilitated by the sacred geometry of the triangle (note: in astrological terms, two overlapping grand trines (or equilateral triangles) constitute a grand sextile).

On Christmas Day, 2012, the One People’s Public Trust was born on an extremely auspicious day, astrologically speaking, with a potent Finger of God formation symbolizing the birth of a new paradigm (see previous posting). Not surprisingly, given this launch date and other factors, OPPT very quickly went viral. Fast forward seven month to July 29, 2013, which all astrological indicators suggest will be an equally potent tipping point, a day when the One People achieve lift off, or critical mass, for the sake of the human race and our beloved planet. Let it be so.