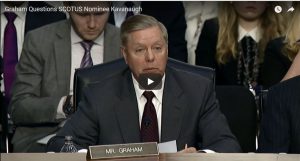 Respondents, who are nonresident enemy aliens, were captured in China by the United States Army and tried and convicted in China by an American military commission for violations of the laws of war committed in China prior to their capture. They were transported to the American-occupied part of Germany and imprisoned there in the custody of the Army. At no time were they within the territorial jurisdiction of any American civil court. Claiming that their trial, conviction, and imprisonment violated Articles I and III, the Fifth Amendment, and other provisions of our Constitution, laws of the United States, and provisions of the Geneva Convention, they petitioned the District Court for the District of Columbia for a writ of habeas corpus directed to the Secretary of Defense, the Secretary of the Army, and several officers of the Army having directive power over their custodian.

(a) Our law does not abolish inherent distinctions recognized throughout the civilized world between citizens and aliens, nor between aliens of friendly and enemy allegiance, nor between resident enemy aliens who have submitted themselves to our laws and nonresident enemy aliens who at all times have remained with, and adhered to, enemy governments. P. 339 U. S. 769.

(b) In extending certain constitutional protections to resident aliens, this Court has been careful to point out that it was the aliens’ presence within its territorial jurisdiction that gave the Judiciary power to act. P. 339 U. S. 771.

(c) Executive power over enemy aliens, undelayed and unhampered by litigation, has been deemed, throughout our history, essential to wartime security. P. 339 U. S. 774.

(d) A resident enemy alien is constitutionally subject to summary arrest, internment, and deportation whenever a “declared war” exists. Courts will entertain his plea for freedom from executive custody only to ascertain the existence of a state of war and

whether he is an alien enemy. Once these jurisdictional facts have been determined, courts will not inquire into any other issue as to his internment. P. 339 U. S. 775.

(e) A nonresident enemy alien, especially one who has remained in the service of the enemy, does not have even this qualified access to our courts. P. 339 U. S. 776.

3. The Constitution does not confer a right of personal security or an immunity from military trial and punishment upon an alien enemy engaged in the hostile service of a government at war with the United States. Pp. 339 U. S. 781-785.

(a) The term “any person” in the Fifth Amendment does not extend its protection to alien enemies everywhere in the world engaged in hostilities against us. Pp. 339 U. S. 782-783.

(b) The claim asserted by respondents and sustained by the court below would, in practical effect, amount to a right not to be tried at all for an offense against our armed forces. P. 339 U. S. 782.

4. The petition in this case alleges no fact showing lack of jurisdiction in the military authorities to accuse, try, and condemn these prisoners, or that they acted in excess of their lawful powers. Pp. 339 U. S. 785-790.

(a) The jurisdiction of military authorities, during or following hostilities, to punish those guilty of offenses against the laws of war is long established. P. 339 U. S. 786.

(b) It being within the jurisdiction of a military commission to try these prisoners, it was for it to determine whether the laws of war applied, and whether they had been violated. Pp. 339 U. S. 786-788.

(c) It is not the function of the Judiciary to entertain private litigation — even by a citizen — which challenges the legality, wisdom, or propriety of the Commander in Chief in sending our armed forces abroad or to any particular region. P. 339 U. S. 789.

(d) Nothing in the Geneva Convention makes these prisoners immune from prosecution or punishment for war crimes. P. 339 U. S. 789.

(e) Article 60 of the Geneva Convention, requiring that notice of trial of prisoners of war be given to the protecting power, is inapplicable to trials for war crimes committed before capture. Pp. 339 U. S. 789-790.

(f) Article 63 of the Geneva Convention, requiring trial of prisoners of war “by the same courts and according to the same

procedure as in the case of persons belonging to the armed forces of the detaining Power,” is likewise inapplicable to trials for war crimes committed before capture. P. 339 U. S. 790.

5. Since there is no basis in this case for invoking federal judicial power, it is not necessary to decide where, if the case were otherwise, the petition should be filed. Pp. 339 U. S. 790-791.

In 2001, Yaser Esam Hamdi was captured by troops of the U.S.-friendly Northern Alliance in Afghanistan and transferred to the American military. He was a U.S. citizen born in Louisiana but had lived in Saudi Arabia since 1980. Although he was not involved in fighting in Afghanistan, according to his father, he was classified and detained as an enemy combatant, first in Afghanistan and later in Guantanamo Bay. Once his citizenship was discovered, Hamdi was moved to naval prisons in Virginia and South Carolina.

At that stage, his father brought a petition for habeas corpus relief, challenging his status as an enemy combatant. This was a classification that the government had invoked under the Authorization for Use of Military Force, a law passed after the terrorist attacks of September 11, 2001. It denied access to a lawyer and civilian courts to detainees for reasons of national security.

Using the three-part balancing test of Mathews v. Eldridge, O’Connor found that due process required that detainees have a meaningful opportunity to challenge their enemy combatant status. The three issues to consider under this standard are the interests of the government, the individual rights at stake, and the extent to which additional procedures would improve the chance of reaching a just outcome.

The plurality recognized the significance of the interests on both sides, which pitted individual liberty against national security. O’Connor tried to strike a compromise by reducing the evidentiary requirements for the government, including permitting the introduction of hearsay and adjusting the burden of proof. Her decision required the Department of Defense to create tribunals for reviewing the status of enemy combatants, which did not need to be overseen by an Article III judge. She found that detainees had the right to a lawyer during these proceedings, however. O’Connor was less deferential to the government than the Fourth Circuit. She emphasized the value of courts in checking executive power, even during wartime, so that individual rights could be protected. The writ of habeas corpus traditionally had played a key role in this separation of power.

While agreeing with the plurality that detainees like Hamdi deserved some measure of due process to challenge their status, Souter was not convinced that the Authorization for Use of Military Force provided an adequate basis for detaining them.

Relying on an originalist interpretation of the Constitution and American history, Scalia felt that the government needed to either try Hamdi in criminal proceedings or suspend the writ of habeas corpus. He felt that the plurality went beyond the Court’s proper role in prescribing certain procedures rather than simply determining whether or not the current procedures were permissible.

This Justice would have upheld the Fourth Circuit in finding that no additional due process was needed for individuals detained as enemy combatants. Thomas argued for strong deference to the executive branch, considering the national security interests involved and its traditional authority over war and emergency situations. He felt that the Authorization for Use of Military Force provided authority for the current system of detention.

The balance between individual freedom and national security resonated through many of the Supreme Court’s decisions after September 11, when the government enacted more restrictive and intrusive measures. Since both issues are among the most fundamental that it considers, decisions balancing them are likely to be hotly contested, deeply divided, and unpredictable. This decision was far from conclusive, instead leading to the Supreme Court case of Hamdan v. Rumsfeld, which dealt with apparent deficiencies in the way that the tribunals authorized by Hamdi functioned.
Less
SYLLABUS
OCTOBER TERM, 2003
HAMDI V. RUMSFELD

SUPREME COURT OF THE UNITED STATES

After Congress passed a resolution—the Authorization for Use of Military Force (AUMF)—empowering the President to “use all necessary and appropriate force” against “nations, organizations, or persons” that he determines “planned, authorized, committed, or aided” in the September 11, 2001, al Qaeda terrorist attacks, the President ordered the Armed Forces to Afghanistan to subdue al Qaeda and quell the supporting Taliban regime. Petitioner Hamdi, an American citizen whom the Government has classified as an “enemy combatant” for allegedly taking up arms with the Taliban during the conflict, was captured in Afghanistan and presently is detained at a naval brig in Charleston, S. C. Hamdi’s father filed this habeas petition on his behalf under 28 U. S. C. §2241, alleging, among other things, that the Government holds his son in violation of the Fifth and Fourteenth Amendments. Although the petition did not elaborate on the factual circumstances of Hamdi’s capture and detention, his father has asserted in other documents in the record that Hamdi went to Afghanistan to do “relief work” less than two months before September 11 and could not have received military training. The Government attached to its response to the petition a declaration from Michael Mobbs (Mobbs Declaration), a Defense Department official. The Mobbs Declaration alleges various details regarding Hamdi’s trip to Afghanistan, his affiliation there with a Taliban unit during a time when the Taliban was battling U. S.allies, and his subsequent surrender of an assault rifle. The District Court found that the Mobbs Declaration, standing alone, did not support Hamdi’s detention and ordered the Government to turn over numerous materials for in camera review. The Fourth Circuit reversed, stressing that, because it was undisputed that Hamdi was captured in an active combat zone, no factual inquiry or evidentiary hearing allowing Hamdi to be heard or to rebut the Government’s assertions was necessary or proper. Concluding that the factual averments in the Mobbs Declaration, if accurate, provided a sufficient basis upon which to conclude that the President had constitutionally detained Hamdi, the court ordered the habeas petition dismissed. The appeals court held that, assuming that express congressional authorization of the detention was required by 18 U. S. C. §4001(a)—which provides that “[n]o citizen shall be imprisoned or otherwise detained by the United States except pursuant to an Act of Congress”— the AUMF’s “necessary and appropriate force” language provided the authorization for Hamdi’s detention. It also concluded that Hamdi is entitled only to a limited judicial inquiry into his detention’s legality under the war powers of the political branches, and not to a searching review of the factual determinations underlying his seizure.

Held: The judgment is vacated, and the case is remanded.

Justice O’Connor, joined by The Chief Justice, Justice Kennedy, and Justice Breyer, concluded that although Congress authorized the detention of combatants in the narrow circumstances alleged in this case, due process demands that a citizen held in the United States as an enemy combatant be given a meaningful opportunity to contest the factual basis for that detention before a neutral decisionmaker. Pp. 14–15.

Justice Souter, joined by Justice Ginsburg, concluded that Hamdi’s detention is unauthorized, but joined with the plurality to conclude that on remand Hamdi should have a meaningful opportunity to offer evidence that he is not an enemy combatant. Pp. 2–3, 15.