Graham Hancock: Ancient Civilizations and Reconnecting with The Divine Spark Within Us 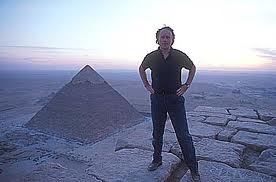 Graham Hancock: Ancient Civilizations and Reconnecting with The Divine Spark Within Us

In 2005 Hancock published Supernatural: Meetings with The Ancient Teachers of Mankind, an investigation of shamanism and the origins of religion. This controversial book suggests that experiences in altered states of consciousness have played a fundamental role in the evolution of human culture, and that other realities – indeed parallel worlds – surround us all the time but are not normally accessible to our senses.

While researching Supernatural, Hancock travelled to the Amazon to drink the visionary brew Ayahuasca – the Vine of Souls – used by shamans for more than 4000 years. It was his experiences with the vine lead to his first novel, Entangled (http://www.grahamhancock.com/entangled/). Written with the same page-turning appeal that has made his non-fiction so popular it tells the story of a supernatural battle of good against evil fought out across the dimension of time on the human plane. In June Graham published his second historical novel, War God: Nights of the Witch (http://www.grahamhancock.com/wargod/), which tells the epic story of the Spanish Conquest of Mexico.

1 Comment to “ Graham Hancock: Ancient Civilizations and Reconnecting with The Divine Spark Within Us”