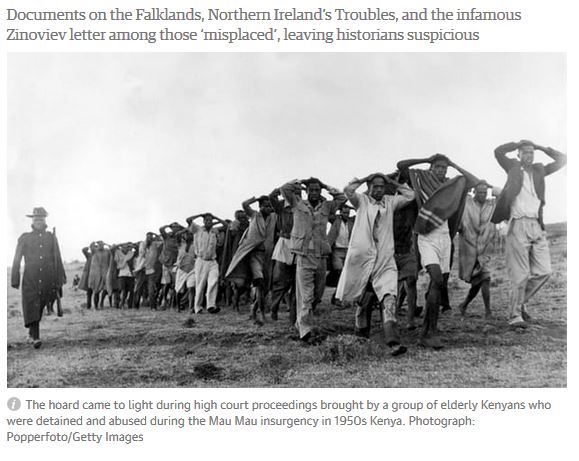 Thousands of government papers detailing some of the most controversial episodes in 20th-century British history have vanished after civil servants removed them from the country’s National Archives and then reported them as lost.

Documents concerning the Falklands war, Northern Ireland’s Troubles and the infamous Zinoviev letter – in which MI6 officers plotted to bring about the downfall of the first Labour government – are all said to have been misplaced.

Other missing files concern the British colonial administration in Palestine, tests on polio vaccines and long-running territorial disputes between the UK and Argentina.

Almost 1,000 files, each thought to contain dozens of papers, are affected. In most instances the entire file is said to have been mislaid after being removed from public view at the archives and taken back to Whitehall.

An entire file on the Zinoviev letter scandal is said to have been lost after Home Office civil servants took it away. The Home Office declined to say why it was taken or when or how it was lost. Nor would its say whether any copies had been made.

In other instances, papers from within files have been carefully selected and taken away.

Foreign Office officials removed a small number of papers in 2015 from a file concerning the 1978 murder of Georgi Markov, a dissident Bulgarian journalist who died after being shot in the leg with a tiny pellet containing ricin while crossing Waterloo Bridge in central London.

The Foreign Office subsequently told the National Archives that the papers taken were nowhere to be found.

After being questioned by the Guardian, it said it had managed to locate most of the papers and return them to the archives. A couple, however, are still missing. The FO declined to say why it had taken the papers, or whether it had copies.

Other files the National Archives has listed as “misplaced while on loan to government department” include one concerning the activities of the Communist party of Great Britain at the height of the cold war; another detailing the way in which the British government took possession of Russian government funds held in British banks after the 1917 revolution; an assessment for government ministers on the security situation in Northern Ireland in the early 1970s; and three files about defence agreements between the UK and newly independent Malaya in the late 1950s, shortly before the two countries went to war with Indonesia.

The disappearances highlight the ease with which government departments can commandeer official papers long after they have been declassified and made available to historians and the public at the archives at Kew, south-west London.

A Freedom of Information Act request in 2014 showed that 9,308 files were returned to government departments in this way in 2011. The following year 7,122 files were loaned out, and 7,468 in 2013. The National Archives says Whitehall departments are strongly encouraged to promptly return them, but they are not under any obligation to do so.

“The National Archives regularly sends lists to government departments of files that they have out on loan,” a spokesperson said. “If we are notified that a file is missing, we do ask what actions have been done and what action is being taken to find the file.”

Some historians have been particularly distrustful of the Foreign Office since 2013, when the Guardian disclosed that the department had been unlawfully hoarding 1.2m historical files at a high-security compound near Milton Keynes in Buckinghamshire.

The hoard came to light during high court proceedings brought by a group of elderly Kenyans who were detained and abused during the Mau Mau insurgency in 1950s Kenya, when the Foreign Office admitted it had withheld thousands of colonial-era files.

A few years earlier, the Ministry of Defence refused to consider a number of files for release under the Freedom of Information Act on the grounds that they may have been exposed to asbestos.

The files concerned such matters as arms sales to Saudi Arabia, UK special forces operations against Indonesia and interrogation techniques. The MoD denied it was using the presence of asbestos in an old archive building as an excuse to suppress the documents.