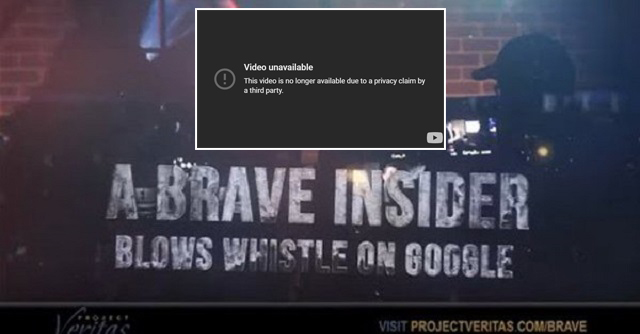 BIG UPDATE: YouTube has REMOVED the video from their platform. The video is still available on this website page.

UPDATE 1: Congressman Louie Gohmert issued a statement, saying “Google should not be deciding whether content is important or trivial and they most assuredly should not be meddling in our election process. They need their immunity stripped…”

UPDATE 2: Google executive Jen Gennai RESPONDED to the video, saying, “I was having a casual chat with someone at a restaurant and used some imprecise language. Project Veritas got me. Well done.”

Insider: Google “is bent on never letting somebody like Donald Trump come to power again.”

Google Exec Says Don’t Break Us Up: “smaller companies don’t have the resources” to “prevent next Trump situation”

(New York City) — Project Veritas has released a new report on Google which includes undercover video of a Senior Google Executive, leaked documents, and testimony from a Google insider.  The report appears to show Google’s plans to affect the outcome of the 2020 elections and “prevent” the next “Trump situation.”

“Elizabeth Warren is saying we should break up Google. And like, I love her but she’s very misguided, like that will not make it better it will make it worse, because all these smaller companies who don’t have the same resources that we do will be charged with preventing the next Trump situation, it’s like a small company cannot do that.”

“This is the third tech insider who has bravely stepped forward to expose the secrets of Silicon Valley.  These new documents, supported by undercover video, raise questions of Google’s neutrality and the role they see themselves fulfilling in the 2020 elections.”

Jen Gennai is the head of “Responsible Innovation” for Google, a sector that monitors and evaluates the responsible implementation of Artificial Intelligence (AI) technologies.  In the video, Gennai says Google has been working diligently to “prevent” the results of the 2016 election from repeating in 2020:

“We’re also training our algorithms, like, if 2016 happened again, would we have, would the outcome be different?”

Google: Artificial Intelligence Is For A “fair and equitable” State

“The reason we launched our A.I. principles is because people were not putting that line in the sand, that they were not saying what’s fair and what’s equitable so we’re like, well we are a big company, we’re going to say it.” – Jen Gennai, Head Of Responsible Innovation, Google

The Google insider explained the impact of artificial intelligence and Machine Learning Fairness:

“They’re going to redefine a reality based on what they think is fair and based upon what they want, and what and is part of their agenda.”

Additional leaked documents detail how Google defines and prioritizes content from different news publishers and how its products feature that content.  One document, called the “Fake News-letter” explains Google’s goal to have a “single point of truth” across their products.