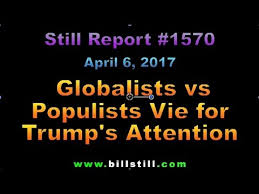 As is always the case at this point in a new President’s administration, those who have been brought in to work in the White House, begin to separate into different camps. The division that is gaining media attention both here and in Britain is the division between the populists and the big banker/globalists.
This should come as no surprise. We aren’t going to expunge the influence of big banks – ever, ever, ever. We can only decrease it as we, through our efforts, increase our own political influence.
And that’s what my video blog has been all about since I started it 10 years ago this coming July.
And mind you, I don’t want to purge big bankers from the planet. They represent an interest group and certainly since God put them here, they must be good for something? Even vultures and leeches have their place.
However, unless we completely eliminate for-profit lending – called usury by some – we will need bankers to determine risk of lending and administer those loans. We also need them to create a competitive market so that we, the people, can get the best deal when we do have to borrow.
However, decreasing bankers’ ability to create all of a nation’s money out of interest-bearing debt is not one of their benign or beneficial activities in this, or any nation. And without changes to this system, the inevitable outcome is bankers will end up accumulating all money on their side of the table and inevitably use that money among the political class to ensure that their privileges are not taken away. You can see this happening right now.