by Dr Michael Salla , published on Exopolitics, on January 3, 2018 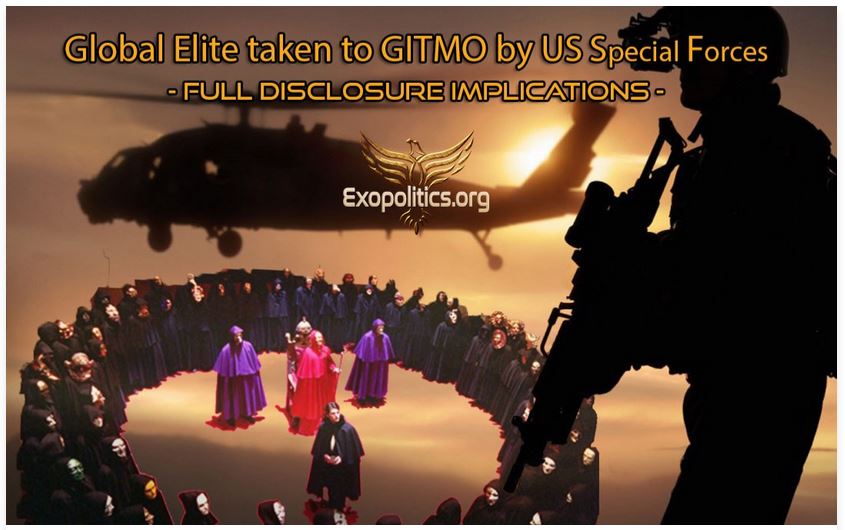 The internet has been buzzing with rumors that high level VIP members of the Deep State (aka Cabal/Illuminati/Global Elite) are being detained for human rights abuses and corruption, and are being taken by U.S. Special Forces to military prison at Guantanamo Bay Naval Base (Gitmo) as a result of thousands of sealed indictments. Multiple sources have been reporting on some of the key VIP figures taken there.

While these are still only rumors, recent events point to their plausibility.  If accurate, these secret investigations, arrests and extractions to Gitmo where they face extended detention and military justice has enormous political implications, and makes possible the release of suppressed information previously withheld by the Deep State.

One source of such rumors comes from David Todeschini, a former USAF veteran who wrote an expose about covert operations during the Vietnam War. He describes what he learned from a reliable FBI source about recent events at Guantanamo in a December 24, 2017 Youtube video, which he summarized as follows:

High-level confidential sources tell this reporter that the U.S. Military prison at Guantanamo Bay has been alerted to expect high-profile prisoners shortly – possibly as a result of over 10,000 Sealed FEDERAL indictments. 1,000 Marines accompanied General Mattis to Gitmo to provide security for “special prisoners”.…

Another source for secret extractions to GITMO via sealed indictments is veteran journalist Dr. Jerome Corsi who tweeted: 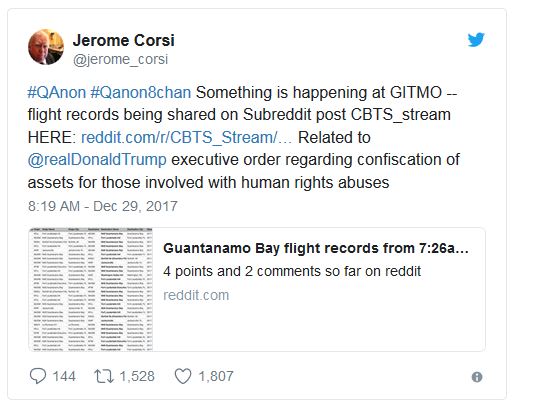 A third source is the alleged whistleblower QAnon who has been cited as the author of a December 27 post, which refers to recent VIP arrivals at Gitmo:

What is worth emphasizing in the alleged QAnon post is that new residents began arriving at Gitmo on December 26, 2017, and more were expected. This was after President Trump had issued his Executive Order on December 21 declaring a “national emergency” in response to human rights abuses and corruption anywhere around the world.

Finally, we have former Forbes Magazine correspondent, Benjamin Fulford, who wrote on January 1, 2018:

In a historic moment of poetic justice, most of the U.S.-based top perpetrators of the fake “war on terror” have now themselves been renditioned to the U.S. Navy camp in Guantanamo Bay, Cuba, Pentagon sources say.  “The Rothschild assets George Soros, Peter Munk, Peter Sutherland, the Bushes, the Podestas, and many others may have been airlifted to Gitmo for military tribunals, as the Department of Defense spends $500M to upgrade the prison and send more military police and Marines,” the sources say.

What can be distilled from these independent sources is that high level Deep State members, many of whom are part of a Pedophile Satanic global network, are being detained by U.S. Special Forces and taken to Gitmo where they are to be held indefinitely, while military justice is applied to their cases. In the process, Gitmo’s holding facilities are being significantly upgraded with expansions and more guards to accommodate an infusion of VIP prisoners.

Among the first to refer to U.S. Special Forces being used to investigate and detain Deep State figures under the authority of sealed indictments was Secret Space Program whistleblower Corey Goode. He referred to such military investigations back on August 9, 2017 after being briefed by a source he described as retired FBI and career military:

[T]here were teams of US Special Forces that were conducting “domestic surveillance and investigations of a Satanic group that had infiltrated all aspects of government agencies and the military. These Special Forces teams have been in place since the middle of the election cycle…. I was informed that a secret report on how pervasive these infiltrations are is more shocking than what was expected. Strangely, this report also had notes from several secret grand juries that are active right now in D.C.

The report states that the conspiracy involves the majority of powerful people in within the UN, EU, US, State and local (City) power structures. These government organization are completely complicit in what is going on. All the way down to local Post Offices and Police Offices.

More recently, Goode says that his sources have told him that Gitmo is being upgraded to host VIP detainees, and includes wheelchair access for some of them, who are being detained by Special Forces working around the globe He explained in a November 5 communication with best selling author David Wilcock:

Secret Grand Juries were almost totally complete with their investigations when everything changed. They had sealed indictments being prepared when they received a cache of new info that gave them a wider net to cast.

Their investigation has since expanded dramatically. So much about the plans of a coup is known about by the Cabal that I don’t know how much longer the Alliance can wait to act and prevent the Cabal from sneaking out of the country.

Some of the really bad ones have already left. Our SF [Special Forces] teams are planning on going in to some of these countries that are hiding these Cabal members and taking them by force.

Are such claims true? In scrutinizing public records what is known fact is that James Mattis, Secretary of Defense, did visit Gitmo on December 21 becoming the first Secretary of Defense to do so since 2002.  It was the same day that Trump issued his “Executive Order Blocking the Property of Persons Involved in Serious Human Rights Abuse or Corruption”, where he declared:

I therefore determine that serious human rights abuse and corruption around the world constitute an unusual and extraordinary threat to the national security, foreign policy, and economy of the United States, and I hereby declare a national emergency to deal with that threat.

The timing suggests that this was more than coincidence, and raised a possible link between Mattis’ visit and the Executive Order. Such a link is strengthened by an earlier visit to Gitmo in July 2017 by Attorney General Jeff Sessions who called Gitmo:

a “perfectly acceptable” place to detain new terrorist suspects, as opposed to holding them in the US and having his own Justice Department try them in civilian courts.