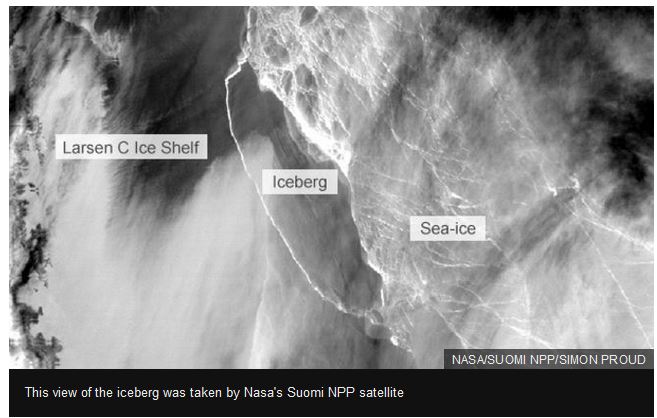 One of the biggest icebergs ever recorded has just broken away from Antarctica.

The giant block is estimated to cover an area of roughly 6,000 sq km; that’s about a quarter the size of Wales.

A US satellite observed the berg on Wednesday while passing over a region known as the Larsen C Ice Shelf.

Scientists were expecting it. They’d been following the development of a large crack in Larsen’s ice for more than a decade.

The rift’s propagation had accelerated since 2014, making an imminent calving ever more likely.

The more than 200m-thick tabular berg will not move very far, very fast in the short term. But it will need to be monitored. Currents and winds might eventually push it north of the Antarctic where it could become a hazard to shipping.

An infrared sensor on the American space agency’s Aqua satellite spied clear water in the rift between the shelf and the berg on Wednesday. The water is warmer relative to the surrounding ice and air – both of which are sub-zero.

“The rift was barely visible in these data in recent weeks, but the signature is so clear now that it must have opened considerably along its whole length,” explained Prof Adrian Luckman, whose Project Midas at Swansea University has followed the berg’s evolution most closely.

The event was confirmed by other spacecraft such as Europe’s Sentinel-1 satellite-radar system. 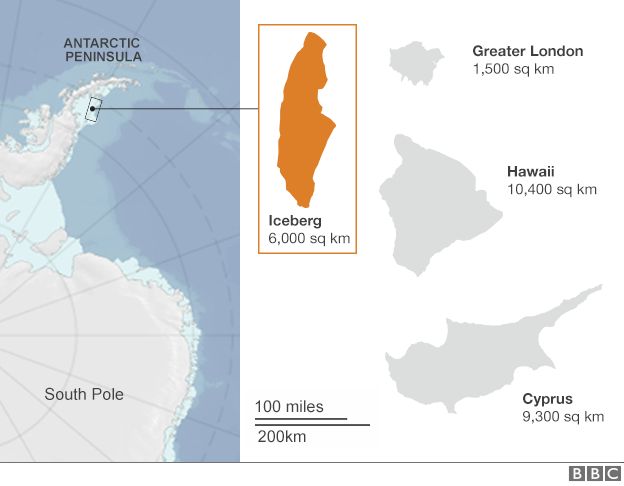 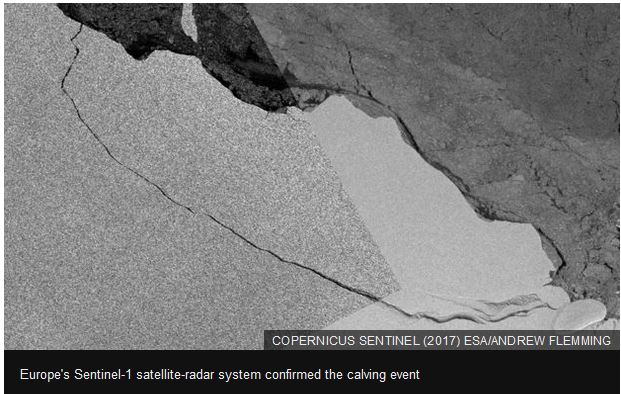 How does it compare with past bergs?

The new Larsen berg is probably in the top 10 biggest ever recorded.

The largest observed in the satellite era was an object called B-15. It came away from the Ross Ice Shelf in 2000 and measured some 11,000 sq km. Six years later, fragments of this super-berg still persisted and passed by New Zealand.

In 1956, it was reported that a US Navy icebreaker had encountered an object of roughly 32,000 sq km. That is bigger than Belgium. Unfortunately, there were no satellites at the time to follow up and verify the observation.

It has been known also for the Larsen C Ice Shelf itself to spawn bigger bergs. An object measuring some 9,000 sq km came away in 1986. Many of Larsen’s progeny can get wound up in a gyre in the Weddell sea or can be despatched north on currents into the Southern Ocean, and even into the South Atlantic.

A good number of bergs from this sector can end up being caught on the shallow continental shelf around the British overseas territory of South Georgia where they gradually wither away. 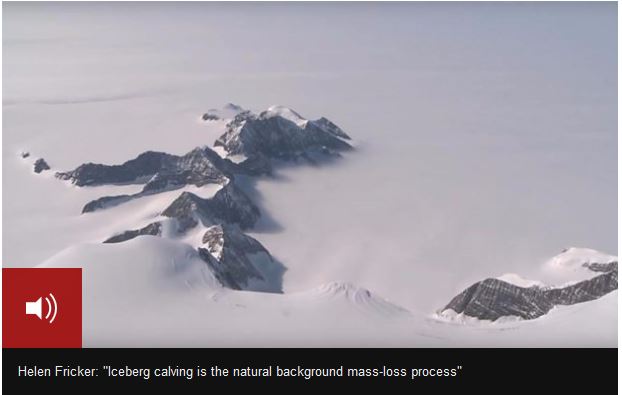 What is the significance of the calving?

In and of itself, probably very little. The Larsen C shelf is a mass of floating ice formed by glaciers that have flowed down off the eastern side of the Antarctic Peninsula into the ocean. On entering the water, their buoyant fronts lift up and join together to make a single protrusion.

The calving of bergs at the forward edge of the shelf is a very natural behaviour. The shelf likes to maintain an equilibrium and the ejection of bergs is one way it balances the accumulation of mass from snowfall and the input of more ice from the feeding glaciers on land. 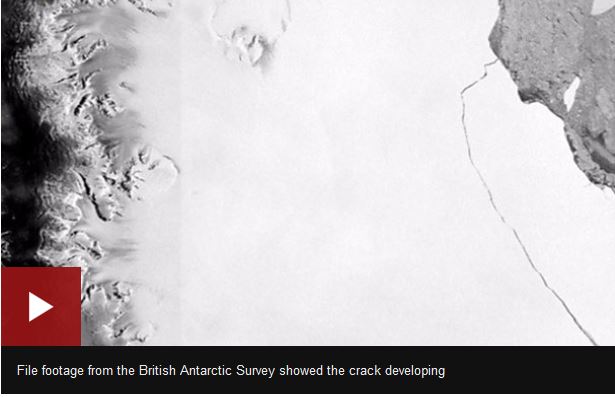 That said, scientists think Larsen C is now at its smallest extent since the end of the last ice age some 11,700 years ago, and about 10 other shelves further to the north along the Peninsula have either collapsed or greatly retreated in recent decades.

The two nearby, smaller shelves, Larsen A and Larsen B, disintegrated around the turn of the century; and a warming climate very probably had a role in their demise.

“Most glaciologists are not particularly alarmed by what’s going on at Larsen C, yet. It’s business as usual.” 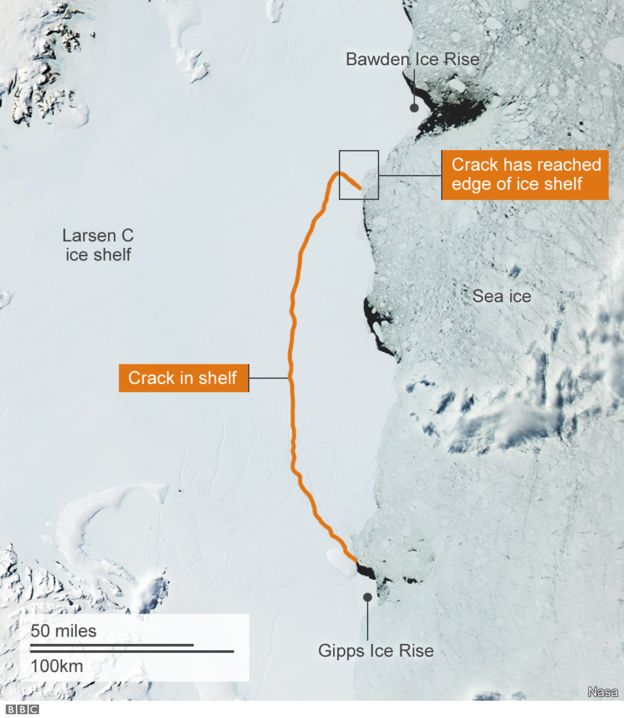 Researchers will be looking to see how the shelf responds in the coming years, to see how well it maintains a stable configuration, and if its calving rate changes.

There was some keen interest a while back when the crack, which spread across the shelf from a pinning point known as the Gipps Ice Rise, looked as though it might sweep around behind another such anchor called the Bawden Ice Rise. Had that happened, it could have prompted a significant speed-up in the shelf’s seaward movement once the berg came off.

As it is, scientists are not now expecting a big change in the speed of the ice.

One fascinating focus for future study will be a strip of “warm”, malleable ice that runs east-west through the shelf, reaching the ocean edge about 100km north from the Gipps Ice Rise. This strip is referred to as the Joerg suture zone. There is a large queue of cracks held behind it.

“Calving of the iceberg is not likely itself to make the existing cracks at the Joerg Peninsula suture zone more likely to jump across this boundary,” observed Chris Borstad, from the University Centre in Svalbard (UNIS).

“At this stage we really don’t know whether there is some larger-scale process that might be weakening this zone, like ocean melting at the base of the shelf, or whether the current rift was just a random or episodic event that was bound to happen at some point.

“We know that rifts like this periodically propagate and cause large tabular icebergs to break from ice shelves, even in the absence of any climate-driven changes.

“I am working with a number of colleagues to design field experiments on Larsen C to answer this specific question (by measuring the properties of the Joerg suture zone directly). But until we get down there and take some more measurements we can only speculate.” 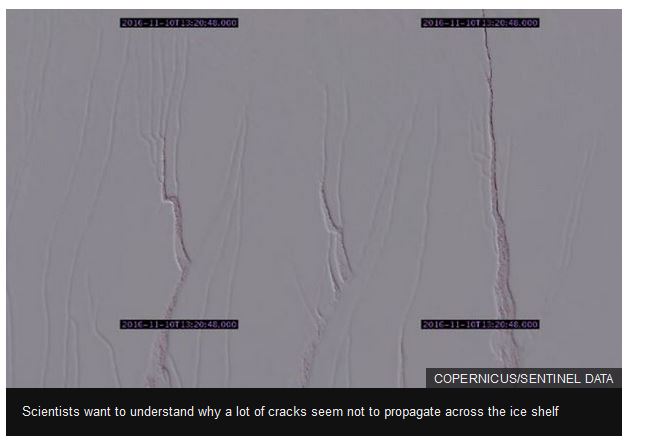