Gaia is Ascending: 2nd Wave of Energy and Another Expected

Gaia is Ascending: 2nd Wave of Energy and Another Expected 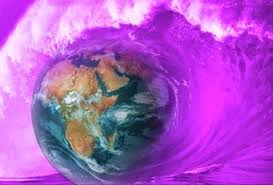 Energy from an unknown source hit the Earth December 19, 2017. Massive waves of anomalous energy were recorded by the MIMIC Satellite; a satellite that detects rainfall by using microwave detectors pointed toward the Earth. Is this energy a precursor to Ascension?

Dutchsinse stated “I don’t know what to make of this — this is the first time I’ve ever seen something this large over such a vast area show up on MIMIC like this.”

A Third Wave
For those who follow solar weather, recall the October collapse of the Earth’s magnetic shields and the reversal of the solar winds (see “The Plasma Wave, Timelines & the Dream”).

A month and a half later we are again experiencing unusual energies. And according to BPEarthwatch we face a third, even more intense phenomenon. The video link posted below announces a gamma ray burst that is anticipated to arrive December 26, 2017.

According to James Gilliland, who also predicted this event, gamma rays are 7th dimensional energy waves that accelerate human frequency and assist with the transformation of human consciousness.

According to Whistleblower Corey Goode, and numerous other sources, the global elite (“powers that were”) are preparing for this inevitable cosmic shockwave by heading to safety far below the Antarctic ice sheet to a system of ancient caves.

Rather than perceive the impending burst of galactic energy in a positive light, as an energy source that will point our collective consciousness toward Ascension, this group assumes the worst – an apocalyptic event that will negatively affect humanity.

Late summer of 2011 I was given information I did not fully understand. If Dutch’s video is indeed authentic, the information I received over six years ago validates what the planet is now experiencing, particularly if we sustain an even stronger third energy wave.

The following is a brief selection from my new book, The Zero Point: A Texas Woman’s Cosmic Journey. A True Story – the first book in a trilogy.

Taken directly from my journals, I recorded the following experience as fully as possible on the pages of a small journal. For the sake of authenticity I have not altered the selection in any way.

Voice: You are One, but yet look no further than your own heart for joy. Be not afraid of Love of thine own heart.

The room suddenly began to vibrate. Everything around me became pixelated. Sacred geometries and angles filled the empty space in front of me. The sound of a bell or another similar sharp tone rang out though my consciousness.

Voice: Remain in your Love energy. Show your heart without fear. This is the practice. Be not afraid to walk in the light of Love.

I had the knowing Thoth was with me.

Me: What is your message?

Thoth: You are One with ALL. Interconnectedness with all vibrations. There are no distinctions. It already exists, why not remain in flow and express it without regard to outcome? This is the teaching. Love energy is permanent, existing without end. Unexpressed and unactualized stifles its power. Remain in Love and all is possible.

I was a newly trained Claim Your Life! Instructor and was asking about offering my first class.

Me: When do I schedule my first seminar?

Ariel: When the moon is high.

Me: Will you help me?

Ariel: Yes, it is written. You are not alone. We are all here to assist you.

Me: Before the Winter Solstice on December 21st?

Ariel: Yes, it is written.

My lips and teeth went numb and Thoth was replaced with a new image.

Standing in the darkness, I saw a Medicine Wheel Indian Chief elder. He pointed to a dark, vibrating path. I could see the glow of warm sunset lights before they slipped down below the horizon. The Chief then showed me a dark horse followed by a flash of rivers that flowed.

As I walked, I held hands with two beings, a tall pale entity of Love to my left and a giant Hathor to my right. The walls in my room began to vibrate. It was Ascension. The veil was revealed.

The Medicine Man pointed to a dark vibrating path, which was symbolic of a low frequency. The sunset lights slipping below the horizon could easily represent the energy that is now moving into our planet.

In the MIMIC video Dutch stated:
If this “event” really occurred (if it’s “real”) then we’re looking at a huge amount of energy impacting the planet causing a planet wide microwave return going off the scales.

If the event is really occurring, then the potential amount of energy going to the core of the planet would be tremendous — this of course could increase volcanic activity, and cause large earthquakes.
[Source: Stillness in the Storm -see above link]

Is the planet preparing for a “Solar Sneeze”, or another form of cosmic energy from outer space that will offer our planet and the human collective an opportunity to embrace higher frequencies and ascend? If so, the imagery I was shown of a dark horse riding free followed by flowing rivers suggests just that.

As I wrote this article I listened to Gregg Prescott’s interview on themythicist with Truth Seekah. I happened to tune as he spoke about his dream of three tidal waves covering the Earth. Is it possible the waves he saw were actually energetic in nature? Perhaps the water imagery was actually a metaphor for the dramatic energetic events that are unfolding around us now.

My intention was to meditate on a literary question regarding my book. Holding my favorite crystal, I quickly went into a deep yet bright meditative state with that particular question in mind when I found myself completely sidetracked.

Unexpectedly, I discovered myself enveloped within a brilliant shield of Light. Intuitively, I called upon my Guides to assist me in anchoring Love & Light into Gaia’s core. As I discharged a golden light directly into her heart-core, something felt different. I realized I was performing this ritual, not for every man woman, child, plant and animal on the planet as I normally do but rather, this charge of Light and Love was solely for Gaia herself.

My heart skipped a beat with excitement as I felt my energy connect deeply with hers. A massive tidal wave of golden Light filled her inner core where the Amplituhedron was poised. This clash of Light, a combination of the Christ Consciousness activation and the Magdalen Grid, paired energy with the continual instreaming of creative Source energy emanating from the Amplituhedron, created a brilliant rose-colored light that flooded the chamber. This vision took my breath away. Gaia was “breathing” Source Field!

Dazed by the beauty of it all, a voice called me back, reminding me I had work to do and the window was closing. Pushing back the overwhelming urge to sob with the Love and relief that was bursting through my soul, I snapped out of my state of awe in time to begin my alchemy. Calling in the Elementals and the Cardinal Directions, we worked together quickly spiraling the energy upward through the Earth and atmosphere in order to envelope Gaia completely.

As we finished weaving the powerful energy all the way up into the new upper matrix of the planet, I stepped back away from her to admire her once more. As I hovered in space, admiring her rose-colored splendor, she changed.

Gaia converted. She went from a brilliant golden pink planet with a beautiful Divine Male-Female Grid surrounding her to the blue marble image we are all accustomed to seeing. The only difference being there was a tremendous ray of Light bursting from her core. It began at the North Pole and ran vertically all the way to her South Pole. It was as if she was being cracked open and out of her heart center poured the brightest, most golden-white Light I’d ever seen.

As I hovered in outer space, staring curiously at the Earth and wondering what this could possibly mean, a young man with sparkling blue eyes entered to my right. He said softly, “Gaia is herself the heart Chakra of our Solar System. She is Ascending.”

He then faded away.

This man felt very familiar, but at that moment I was far too much in awe of what I was seeing to give him much thought.

Days later I saw an article about this blue-eyed man. Evidently, he was a 39-year-old British journalist who was suddenly found dead in Poland. I didn’t know anything about him and I wasn’t sure why he was communicating with me, but I appreciated his words at the time.

As Gaia has claimed her Ascension, so too are we in the process of claiming our own. According to The Law of One Material, 3rd Density Earth will cease, leaving behind 1st, 2nd, 4th, and so on. Individuals needing to repeat 3rd Density lessons may soon find themselves on a completely different planet.

The Law Of One and the Harvest:
https://sitsshow.blogspot.com/2015/07/the-natural-law-basis-of-harvest.html

Time is literally speeding up because the planet is moving higher in frequency and density. Therefore, timelines are wobbly. The Mandala Effect is evidence of this.

The energy will come. Regardless where you choose to rest at the time of its arrival, either boldly in the Light upon the surface or cowering deeply within her shadowy caves, you will experience it. This highly charged energy will connect with all sentient consciousness.

We are each being asked to choose our reality. Evidently, Gaia has chosen hers – and it’s beautiful.

About the author: Alexa Person is and Alchemist of Light, an author and a professional speaker. Born “awake” and gifted with the full spectrum of clairvoyant gifts, Alexa is committed to shifting individuals into a higher alignment of their own Divine Male-Female frequency. Her regular public speaking engagements include her work as a Medium and a Certified Akashic Records Consultant. alexaperson.com