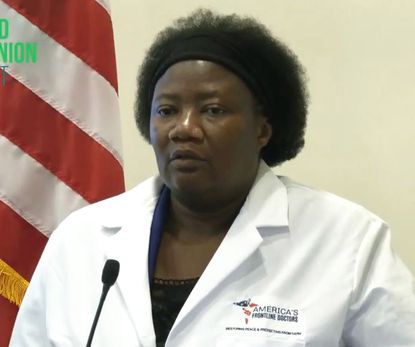 BZ: This is a Warrior of Light doing her role. We each have a role to play. We each are this fierce in our mission for Love Absolute to wash over the planet. Are YOU Standing ALL In and doing what you agreed to do? You Are NOT Small! You Are Not Missing Anything!

HOUSTON – The Houston-area doctor featured in a controversial, viral video claiming an anti-malarial drug is a cure for COVID-19 shared her side of the story with KPRC 2.

Dr. Stella Immanuel touted hydroxychloroquine as the cure for coronavirus in a press conference in front of the U.S. Supreme Court on Monday. The video of her press conference was shared by President Donald Trump and one of his sons before Twitter and Facebook took it down for violating their misinformation policy.

She spoke to KPRC 2′s Joel Eisenbaum Thursday. Here’s what she said:

Joel: You’re an old hat at this already. I mean you had such an impassioned, on Monday that was pretty incredible how impassioned you were. Did you practice that speech?

Joel: But, you understand the world health organization, the FDA they don’t agree with you?

Answer: Of course they don’t agree with me.

Answer: Of course they think I’m dangerous because I’m speaking the truth. I said it many times. Number one: Ask Dr. Anthony Fauci, when was the last time he saw a patient?

When is the last time he put a stethoscope on a patient’s [inaudible] and I’m willing to ask him that. Number two: I’m still waiting for him to come and give me a pee sample to find out if whether he’s on hydroxychloroquine to treat himself. The studies that we did on hydroxychloroquine were done without Anthony Fauci.

This is craziness, I have treated right now, over 400 patients. This is Houston. My patients are going to speak up. You’re going to talk to them. You can, you can interview. Put something on the news and call and tell people that have been treated to call. We’ve treated diabetic patients, we’ve treated pregnant women, we’ve treated old people, 87 years old.

This is craziness. I don’t know what they are doing and somebody needs to tell me FDA, Anthony Fauci, WHO — why are you… why do you want people to die?

Joel: They think it has side effects. The efficacy there was that thing in the New England Journal of Medicine that came out today, that says it didn’t work.

Joel: Yet another study says this doesn’t work.

Answer: There are over 50, there are over 100 papers that have been published over the world. In India, in Turkey, in France. Each time these papers come out (that) this thing works, they do a smear campaign, because if they’re not… Do you know how much hydroxychloroquine costs? $20. By taking hydroxychloroquine, Zinc, Vitamin C and Z-pak, tops, maybe $50-$ 60. You have a whole treatment for COVID.

Joel: Well that’s a minority view on whether or not it’s a cure.

Answer: Okay, let me tell you something. When you have some 300-400 patients and none of them has died, it is not a minority view… I say this all the time. The doctors are saying this thing don’t work. They, most of them, don’t see patients. They’re, you know, dermatologists, or… listen I’m not knocking their specialties. They don’t see patients. And they’re like well, she’s a pediatrician. I’m a pediatrician and I worked in the emergency room. I’ve done that for years. When I trained in Africa, we train as general practitioners we don’t train as pediatricians or orthopedics or whatever. We train as general practitioners.

When I came here, I did a residency in pediatrics because that is what, that was the specialty, the Residency I got into. But once I finished residency, I got done with residency, I work in pediatrics, I’m working in emergency rooms see adults, intubating people I’ve done that for years.

Joel: Why not to silence your critics, publish your data?

Answer: And what would that do? I have the data, I’m going to publish it, but what would that do? How about Dr. (Didier) Raoult’s data? Dr. Raoult, a renowned virologist published the data for over 4,000 patients and they vilified him. Although I hear… France now has agreed for patients to see for people to use hydroxychloroquine. Recently… there is a doctor at Yale, that published data —

Joel: I saw that. It was in Newsweek.

Answer: So there is enough data. The minute one of those comes down then [inaudible] few doctors —

Joel: Then why is everybody not on-board with you?

Answer: They can’t be on-board with me because of Big Pharma. I can tell you, exactly what is going on. There are different layers here. There are people that are just opportunistic. They figured out if this virus drives people crazy and everybody is afraid and schools are lockdown they lose, somebody will lose the election. Somebody will win the election. That’s stupid.

Because the virus doesn’t care Republican or Democrat. Those are the opportunistic people. Then there are people that don’t have no clue. Doctors that are scared of this medication because they hear this narrative. They’ve never taken hydroxychloroquine. They don’t know it. I keep saying, dermatologists speak up. You put patients on this, 15 years, they take this twice a day for 15 years and nothing happens. Speak up. They’ve never taken patients off hydroxychloroquine because they had some kind of issue. Speak up. You know what I’m saying? They know that… I’m comfortable with this medication because I took, [inaudible] flavoquin, [inaudible] we took it growing up.

Answer: Yes! I take two pills twice, every twice a month. I see, you saw our clinic. Are we social distanced in this clinic? We can’t.

You know something? I work with a surgical mask. This is my mask that I work with. I wear this mask so my patients can be comfortable.

Answer: Listen, no. If you’re not on prophylactic, wear a mask. Do you understand what I’m saying? I’m not one of those anti-mask… I’m not anti-vaxxer… I’m not anti all those things. I’m just saying all this vaccine, mask and everything, if they put everyone on hydroxychloroquine, schools would open back up. If they put the vulnerable.

Joel: You don’t even have to be diagnosed?

Answer: You don’t even have to be diagnosed.

Joel: You’re going to run afoul your medical license if you start doing that aren’t you?

Joel: Aren’t you worried about losing it?

Answer: Of course. There is a right to try it in America, it’s the law.

Joel: But I can’t walk into a doctor’s office and say I want to try this drug.

Watch the full interview above. Tune in at 10 p.m. for KPRC 2′s Joel Eisenbaum’s full report.

18 Reasons I Won’t Be Getting a Covid Vaccine 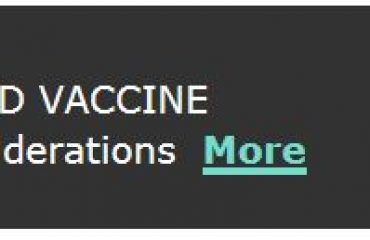 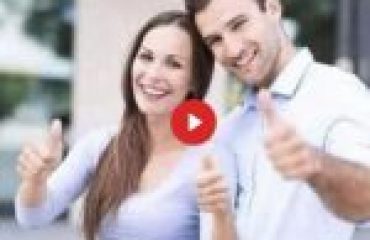