The satan-worshipping elite who hijacked power in the West, fighting for their very lives, have staged a massive counteroffensive in Syria and against U.S. President Donald Trump. This offensive has now run out of steam and is backfiring on them big time as their lies about Syria and many other things are being exposed. And, although no word has been given about when the 25,500 sealed indictments will be acted upon, Pentagon and other sources say action to remove the satanists permanently from world power is intensifying.

On this front, the biggest event in the past week was the death of top satanist Barbara Bush, the likely daughter of Church of Satan founder Alistair Crowley.
http://www.newnationalist.net/2018/04/18/the-uncanny-resemblance-of-barbara-bush-to-aleister-crowley/

She was considered by many to be the lead satan-worshipper in the U.S. after her husband, George Bush Sr. went senile, CIA and other sources agree. Barbara no doubt did not wish to live to see her husband and sons indicted for mass murder and war crimes related to 9/11, Iraq, Fukushima, etc.

However, in this world of fake news and computer graphics, there are a lot of question marks about the timing of this death announcement and the news reports appearing about it. In a glaring example, if you look at the 46 second mark of the TV News 24h broadcast at the link below, you can see Barbara Bush attending her own funeral along with the deceased Nancy Reagan.
https://www.youtube.com/watch?v=trad7UJzUfk&feature=youtu.be

Also, computer experts at the Canadian Secret Intelligence Service say the widely published photograph of former presidents attending the Barbara Bush funeral say it is clearly a “badly made Photoshop fake.” The photo is now being systematically removed from corporate news sites but can be seen below. 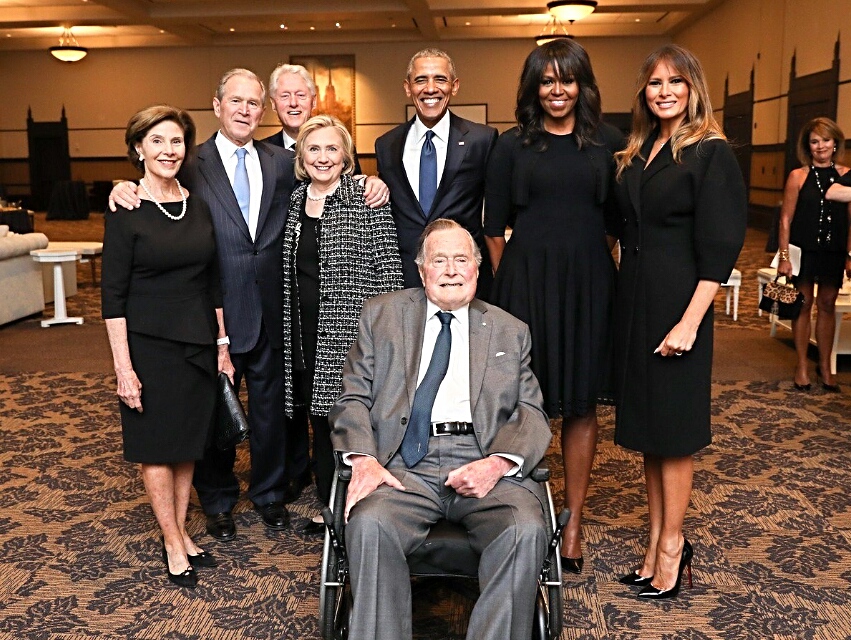 [this is a clearer, uncropped version of what Fulford posted. Click it to enlarge. -MrF]

For those who still think “seeing is believing” when it comes to videos and digital photographs, please take a look at the April 13th public presentation below, where Dr. Supasorn Suwajanakorn, a computer engineer employed by Google’s Brain division, showed fake videos he made of former president Barack Obama speaking.
http://www.bbc.com/news/technology-43639704?SThisFB

So it is possible the entire Barbara Bush funeral thing is fake and “this whole thing smells of Deep State deception,” a senior CIA source says.

Pentagon sources, for their part, say Donald Trump refused to attend the Barbara Bush funeral because of information he received after former aide to Bush-era Vice President Dick Cheney “flipped” and gave testimony against his former bosses in exchange for a pardon.

It also may just be a coincidence, but there was a major explosion and fire reported near the Bush home in Houston, Texas at around the time the funeral footage was being shown.
http://halturnerradioshow.com/index.php/news/u-s-national-news/2407-valero-refinery-on-fire-in-texas-shelter-in-place-order

White Dragon Society sources say the fake funeral reports are designed by the cabal to cover up major defeats they are experiencing as the top satanists are being hunted down worldwide. It’s probable that none of the mass-murdering Bush family will be around much longer, if they are in fact still alive, say Texas-based WDS sources.

Another major death last week was that of Matthew Mellon, heir to the Mellon banking fortune and a member of one of the families that owns the Federal Reserve Board. The Mellons had a serious break in relations with fellow Fed owners the Rockefellers (Clintons), but it is not clear at this point if this was related to Matthew’s untimely death at age 54.
https://www.bloomberg.com/news/articles/2018-04-17/billionaire-banking-heir-matthew-mellon-dies-at-54

In what may also be a related development, the French branch of the Rothschild family has announced that 37-year-old Alexandre de Rothschild has taken over from his father, the 75-year-old wanted criminal David de Rothschild.
https://www.rt.com/business/424399-rothschild-announce-new-boss-appointment/?content_urlfro/

The Gnostic Illuminati, however, appear not to be tolerant of any continued Rothschild control and have informed this writer that they have “contacted agent Nebojsa to ask him to act against Zurich, Switzerland.”

This may be why French Rothschild slave President Emmanuel Macron is visiting the U.S. this week to beg for protection by promising a Rothschild regime change.

The Gnostics probably have good reason to distrust the Rothschilds. Eric Fioril, chairman of the French Transition Council, says Macron himself is implicated in financial and other high-level crimes. The council has evidence the Macron regime has been trying to start a civil war inside France by using state-owned weapons manufacturers to funnel weapons to so-called “Islamist terrorists” in France. “Our sources let us know that some of our main assault weapon makers are receiving orders from Israel and/or Saudi Arabia and/or Gulf clients. The bill goes there, but the rifles, rockets, and ammunition are delivered to jihad groups in France in unstable suburban areas,” he notes. This is causing all sorts of problems and has put France on the “edge of a civil war cliff,” he says.

The implication of this intelligence, he continues, is that it is “more than just gross negligence,” on the part of the government. As such, he continues, the white hats in the French Intelligence and Gendarmerie Intelligence cannot turn a blind eye to this activity. Fioril also notes that, “due to generalized electronic surveillance in our country, we can easily dismantle such heavily armed jihad groups on our soil in less than 10 days if we let our white hats in the IC (their equivalent of the NSA, or Computer Intelligence) and our security forces work in full cooperation. The government is committing textbook treason and the military has a legitimate reason to arrest our illegitimate government,” he concludes.

What the French white hats have stumbled on, of course, is the satanic P2 Freemason plot to force a war between Islam and Christianity in order to then create a one-world religion controlled by them.

In any case, the satanists’ attempt to use the excuse of a fake Syrian gas attack (the sixth such exposed fake) to attack Syria and thus start World War 3 (Armageddon) is being widely exposed as a war crime based on fraud. Even such outlets as the German state media are now reporting this.
https://www.zerohedge.com/news/2018-04-21/germanys-largest-public-tv-news-broadcaster-syria-chemical-attack-most-likely

Furthermore, Special Prosecutor Robert Mueller will soon “complete the witch hunt” when he indicts Hillary Clinton. This may be a reference to the fact, that with Barbara out, she is now the most senior witch standing.

Also, the sources report, “After many months behind the scenes, [former New York Mayor Rudolph] Giuliani finally joins the Trump legal team, who along with Mueller, are poised to target 9/11 perpetrators like the Bush gang and Israel.”

“With a peace treaty formally ending the Korean War, Israel may be forced with exposure of its roles in 9/11 and 3/11 [Fukushima] to make peace with Syria by returning the Golan Heights,” the sources conclude.

A peace deal in Korea would also expose many high-level criminals inside the U.S. military in Japan, according to Japanese military intelligence sources. In a handwritten note delivered to this writer, the sources say the U.S. military in Japan is now split between the people who operate the Yokota Air Base and those stationed at Camp Zama, both near Tokyo. The Yokota people support the regime of Shinzo Abe and the continued cover-up of Fukushima mass-murder crimes, while those in Camp Zama support regime change and the exposure of Fukushima truth, the sources say. Hopefully, incoming Pacific forces commander Admiral Philip Scot Davidson will clean out the war criminals once he formally assumes command.

In other news last week, Turkey has officially demanded that the Federal Reserve Board return all of their gold holdings. This request is probably connected to secret negotiations concerning top CIA Turkey operative Andrew C. Brunson. Officially, Brunson is an evangelical pastor of the Izmir Resurrection Church, a small Protestant church with about 25 congregants, CIA sources say. He was arrested in the purges occurring after the aftermath of the 2016 Turkish coup d’état attempt, imprisoning tens of thousands of Turkish military personnel, civil servants, educators, academics, dissidents, and journalists, they say.

No fewer than 66 U.S. senators are threatening “measures” against Turkey unless he is released. “Why would so many senators come to the aid of a humble preacher and threaten Turkey with ‘measures’ if he is just a man of the cloth?” the CIA official asks, noting that the Turks are trying to trade him for U.S.-based operative Fethullah Gülen. Gülen definitely knows too much about the satanists to be handed over, and so Brunson is “likely to be thrown under the bus,” the source concludes.
https://www.nbcnews.com/news/world/senators-warn-measures-against-turkey-andrew-brunson-case-n867721

In another development last week, it appears that “wearing a tinfoil hat” may not be as crazy as it is made out to be. A leak to the press by a U.S. government insider has revealed details of the energy technology used to make targeted individuals hear voices, feel pain, etc.
https://boingboing.net/2018/04/19/government-accidentally-sends.html

In a final note, in what is either a sign that this writer has friends inside the electronic surveillance community or else they are getting sloppy, recently caller ID on my phone has displayed messages saying things like incoming calls are coming from “Paul” and two other people.
~~~~~~~~~~~~~~~~~~~~~~~~~~