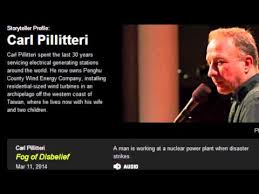 A gut wrenching account of March 11, 2011 at the Fukushima Daiichi nuclear power plant as the great east Japan earthquake hit and tsunami followed. Good thing I uploaded this back in April 2014 because it looks like they removed the interview from the site.
Fukushima worker on verge of breakdown speaking about 3/11: “The earth around me distorting like Jell-O” — Massive upheavals taking entire Reactor 1 turbine building with it — “Sounds like it wants to come apart, going to explode” — “Concrete floor and walls around us began to crack” (AUDIO)
Fog of Disbelief, The Moth, Mar. 11, 2014: http://themoth.org/posts/storytellers…

Carl Pillitteri, supervisor at Fukushima Daiichi on 3/11/11 (at 1:30 in)
It was always my favorite place to work. […] My crew and I were working inside of the Reactor No. 1 turbine building, a huge rectangular-shaped building similar in size to an international airport hangar.
This powerful earthquake causes these massive upheavals of the earth, and then these dropping sensations. It was taking this entire structure we were in with it. It was very violent and it was just starting […] the concrete floor and walls around us began to crack and sections of duct work were coming down and the lights were dropping everywhere […] this huge structure getting the living hell shook out of it. […] We were standing just yards in front of this massive turbine and generator which was spinning at 1500 RPMs being driven by this steam coming right off reactor 1, right off the reactor. You don’t want a reactor… it was at 100% power and the sounds that began to come out of this turbine catch my attention and I start to realize it sounds like it wants to come apart and it’s going to explode.
As if to galvanize and confirm my fears I hear my American coworker from afar in complete darkness ‘It’s going to blow, it’s going to blow.’ I recognized the terror in his voice. […] I went to a psalm, 23:4 … “Though I walk through the valley of the shadow death I feel no evil.” I couldn’t get through it and I broke down in the middle somewhere and surrendered and asked, “Just please, just make this quick.” So we rode it out into the darkness. We were frozen there. We could feel it, we could hear it, we could smell it, we could even taste it, we just couldn’t see it.
[Quakes] were just ripping through […] the earth around me distorting like Jell-O.

Carl Pillitteri spent the last 30 years servicing electrical generating stations around the world. He now owns Penghu County Wind Energy Company, installing residential-sized wind turbines in an archipelago off the western coast of Taiwan, where he lives now with his wife and two children.
~~~~~~~~~~

Infected chickens being disposed of

Officials in Kumamoto, southwestern Japan, have detected the H5 strain of the bird flu virus in dead chickens at a poultry farm in the prefecture.

The prefectural government has banned the movement or shipments of chickens and eggs from farms within a 10-kilometer radius.

Officials say about 1,100 of the 56,000 chickens at a farm in Taragi Town had died by Sunday morning.

Genetic analysis confirmed the H5 strain in 2 of the 10 tested birds.

The prefecture is also setting up sterilization points at 10 locations around the area to disinfect the tires of passing vehicles.