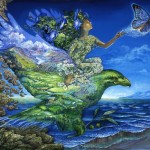 My husband and I had original home mortgage with ABN-Amro which sold to Citimortgage. After years of paying into the system, never quite convinced it was the right way, we openly started questioning the mortgage industry.

All the while we were still paying our monthly payments, we asked Citimortgage for the WET INK NOTE. We were told all kinds of things, once we could actually get them to talk to us, from “they do hold the mortgage” to “no, they don’t as Freddie Mc does and they are only the servicer’. Most of the times they would hang up on us ‘accidentally’ in transferring our call to the right department. We stopped paying, saying we would resume the payments when they can prove they are the owner of the “loan”.

Seeing we would not get them to cooperate, we filed a claim with the Consumer Financial Protection Bureau (CFPB with Richard Cordray as the head) and Lisa Madigan, our state of Illinois Attorney General. They both gave us the case number and started investigating. Only THEN, 15 months later, did Citimortgage send us the packet of documents which were basically a copy of all the papers we signed at the closing, including a copy of a copy of the Promissory Note. That was back in February.

They suddenly decided to foreclose on us and tried to summon us through the servicer of the court. I just never opened the door. The poor man kept coming to our door for six days in a row, but never once leaving the summons by the door. It is said the bank would have to pay about $1000 to be able to do that.

In the meantime, the foreclosed bank tried every possible trick to get us into a Home Loan Modification which we refused each time, citing we would NOT go into a new “loan”, when they can not prove they own the first “loan”. When I got all the names, I wrote the Cover Letters and sent the Courtesy Notice to Citimortgage, their attorney who sued us and the Court Clerk who sent us the Court Notice. And again, Citimortgage tried to push us into a new loan, trying to dismiss the OPPT as a worldwide scam for debt relief. Twice they tried to downplay the Courtesy Notice, and at the same time ignoring our requests for the origin of the loan, invoices, prior title, the Wet Ink Promissory Note and proof of the transfer of the funds.

Mid June we received the summons from the bank’s attorney (this time a different one, but from the same Law Company) trying to get the Default Order, Foreclosure and Sale of the property and Appointment of the Sale Officer. The summons was signed by another clerk, NOT the same one that recieved my CN. That to me was a great sign that the people in the know were washing their hands, as they were specifically told they are acting in their full, personal liability as the corporations they were representing (the bank and the court) were foreclosed upon. They understood the UCC filings if they decided not to repeat the process.

The day of the court was the best! The judge read what the bank wanted to achieve with this motion, asked us for our names to which we said: “They call us xxxxx” They both looked at us very surprised. This was to say we ARE NOT those artifical, corporate entities they are going after, written in all capitals.

Then she asked what we wanted and we said: “The WET INK NOTE and all the above  requirements – the origin of the funds, prior title, proof of transfer of the funds (from Heather’s list) and of course making sure the “loan” is LAWFUL (not legal) and that it exists. The judge looked in surprise and asked: “What do you mean – exists? Did you receive the money? Did you sign the papers?”

Before I could say –  yes we signed the papers – but never actually received the money – my husband said loudly, standing behind the bank’s attorney in all his 6’4″ persona: ” What money? Was this money backed by gold and silver?”

She couldn’t believe her ears and after a few seconds of silence she told the poor attorney who couldn’t get a word: “Well, Mr Dask, I guess you will have to provide the WET INK NOTE!

The next court date is in September”  – the attorney wanted in July, but again, the judge was accomodating to US! She thanked us smilingly for coming and we left the attorney gasping for air, as he couldn’t  even muster two coherent sentences.
It was a great day! One home less stolen from their rightful owner. We believe there WILL BE NO next time.