There’s no denying that some people are having astonishing success with their claims. Go, Shirley. You’re showing ‘em how it’s done.

I can’t help but wonder what Neil Keenan, Drake and Jean Haines think about news like this, because it proves beyond a doubt that the UCC filings, CVACs, foreclosures, and the former “OPPT” are NOT bogus as they seem so desperate to illustrate. Guess they’ll have to eat their shorts!

Documents to back up this story forthcoming and being sent over as I post this. I will upload it to Scrib’d and share it here for everyone to see. 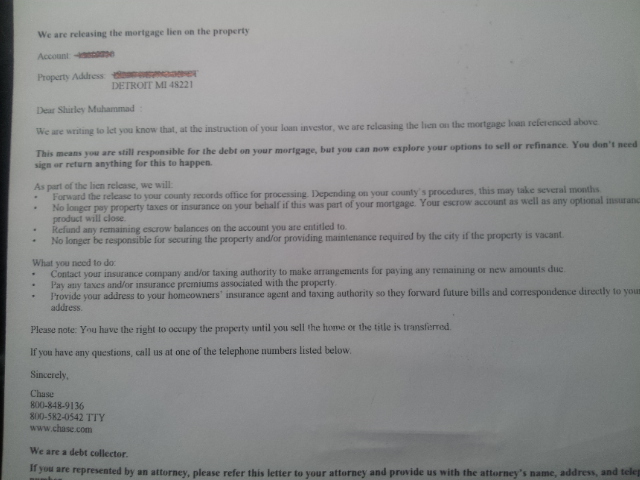 There has been much resistance and criticism of the Courtesy Notice process in recent weeks/months. It has worked wonders with some and failed miserably for others. Fact of the matter is it all lies in the hands of the of the receiving party. Each bank/corporation has many representatives, showing clearly they handle these types of matters with varying degrees of ease/resistance. What it boils down to is this: if a bank (Chase in this particular example) agrees to retract a loan in the amount of $99,692.21, what that clearly implies is their legal team conducted, what was likely an obscene amount of due diligence, to determine the legitimacy of the claim made, referencing the UCC filings and the banks legal foreclosed status. Researched…confirmed…”alleged debt” retracted. Verification of legitimacy of UCC filings by One People’s Public Trust…confirmed. End of story. This is just the beginning. ~BK

Multiple versions of the Courtesy Notice can be found here:
https://i-uv.com/oppt-absolute/oppt-tools/oppt-courtesy-notice/

So, as a success story I would like to report that as of today after sending to the Vice President of the alleged Chase Bank ( who just happen to send me a letter in May with his name and signature on it to sell my home in foreclosure) was a Determination of Funding Letter, 1 Courtesy Notice and 2 invoices totaling 9,000 pieces of 99.9 silver, I received today a letter from the alleged Chase Bank that the lien on my mortgage has been released and discharges the original contract, whereas I am now responsible for the property tax and insurances, and can do what I dam well please with what I want to do with it.
This was a wonderful and fun exercise in which in my heart was the right thing to do to show others that what was being done to all of us was wrong. I needed to take a stand here in Detroit as I watched neighborhoods and communities being torn apart and become inhumane as people were being forced out of their homes, their furnishing thrown in the street and in dumpsters, causing some beautiful homes to be victims of vandalization, with property values dropping like flies, and mortgage payments going through the roof with LIBOR the ARM’s deal The home’s stood empty and all the love was torn from the structures.
What could I do?
With the tools that were given to us by the OPPT crew II used them all, Courtesy Notices, The Determination of Funding letter, the invoices, the court templates etc, I edited them and used them sending all the love and light I could to float above and through each word, with good intent to bring awareness to every person whose eyes read it, and whose heart it may touch.
I am now going to open a Dream Weavers Center to help and show as many people who have eyes to see and ears to hear where their value is, as we are the value and always have been, but it was never taught but was hidden so very well.
Many of the people of family and friends who thought I had lost my mind, want to now join in to see what is going on with formerly OPPT now I/UV to Opt out of the old slavery system and it is done. I say come one come all we are in for another ride but this time there will be more of us. We are Eternal Essence Embodied absent limits !!!!!