BZ: What is happening in Florida in August? This is not about your health and safety… You may want to read a little popular novel called 1984 again… its the shadow government and the state governments in this reality. 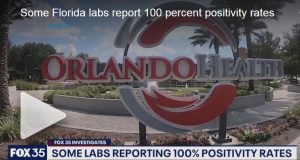 ORLANDO, Fla. – After FOX 35 News noticed errors in the state’s report on positivity rates, the Florida Department of Health said that some laboratories have not been reporting negative test result data to the state.

Countless labs have reported a 100 percent positivity rate, which means every single person tested was positive. Other labs had very high positivity rates. FOX 35 News found that testing sites like one local Centra Care reported that 83 people were tested and all tested positive. Then, NCF Diagnostics in Alachua reported 88 percent of tests were positive.

How could that be? FOX 35 News investigated these astronomical numbers, contacting every local location mentioned in the report.

The report also showed that the Orlando Veteran’s Medical Center had a positivity rate of 76 percent. A spokesperson for the VA told FOX 35 News on Tuesday that this does not reflect their numbers and that the positivity rate for the center is actually 6 percent.

FOX 35 News went on to speak with the Florida Department of Health on Tuesday. They confirmed that although private and public laboratories are required to report positive and negative results to the state immediately, some have not. Specifically, they said that some smaller, private labs were not reporting negative test result data to the state.

“The Department immediately began working with those labs to ensure that all results were being reported in order to provide comprehensive and transparent data,” a spokesperson for the Florida Department of Health said. “As the state continues to receive results from various labs, the Department will continue educating these labs on proper protocol for reporting COVID-19 test results.”

Florida is currently experiencing a surge in COVID-19 cases, reporting the state’s daily reported cases have gone from about 2,000 a day a month ago to over 12,000. Then, on Tuesday, state health officials reported the largest single-day increase in deaths yet, as 132 more were announced.

Doctors had been predicting that a surge in deaths would follow Florida’s jump in daily reported cases. The growing caseload is partly driven by increased testing, but a larger percentage of tests are coming back positive, jumping from 6 percent a month ago to more than 18 percent.

Almost all people infected with coronavirus survive, but those who do succumb usually die two or more weeks after they are first diagnosed.

While Florida has broken national records for jumps in cases, the state’s death toll is nowhere near the national record. When COVID-19 was ravaging New York three months ago, it recorded 799 deaths on April 9 and had a top seven-day average of 763 deaths on April 14. New York now has one of the nation’s lowest death rates per capita, recording 10 per day over the last week.

The latest report from the Florida Department of Health can be viewed below. It includes the positivity rates per lab statewide.