***   BZ: This is a very telling DOT to connect. This signals how desperate for funds the “Illuminati” are.

A tiny, minuscule, nano particle of these funds Might go to help hurricane ravaged areas. All the rest will go right into their pockets. (remember there are Not two “parties” in this country, that concept is as fictitious as the “Judicial system” you have been seeing unveiled.

The five living former US presidents have gathered for a concert in aid of victims of the hurricanes which ravaged the US this year.

The three Democrats and two Republicans came together behind The One America Appeal, set up to help those caught up in the devastating trails of Hurricanes Harvey, Irma and Maria.

It has raised $31m (£23.5m) so far.The politicians launched the appeal in the aftermath of Hurricane Harvey, which caused billions in damage after it made landfall in Texas in August. 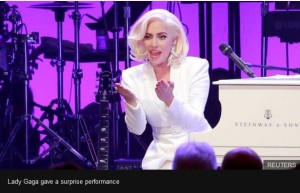 However, it has since been expanded to include the communities in Florida, Puerto Rico and the US Virgin Islands which were hit by the storms which followed.

“As former presidents, we wanted to help our fellow Americans begin to recover,” Mr Obama explained to concertgoers in a pre-recorded message.

His immediate predecessor added: “People are hurting down here but as one Texan put it, we’ve got more love in Texas than water.”

All five presidents appeared on stage for the anthem, before taking their seats to watch acts including Lee Greenwood, who opened with Proud to be an American, and Lady Gaga. 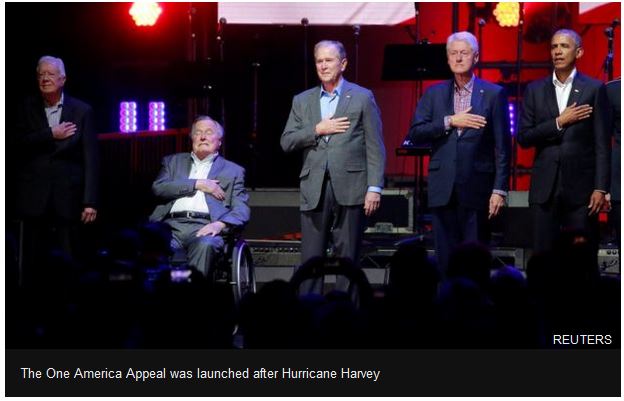 They were not joined by sitting President Donald Trump, who sent a message ahead of the show praising their “wonderful” work and expressing his “deep gratitude”.

Both Mr Obama and the younger Mr Bush have made speeches in the last week which have been seen as veiled criticism of the former reality TV star’s tenure in the White House.

6 Comments to “ Former US presidents gather for hurricanes fundraiser”