Former Senator: 9/11 Hijackers Had “Support from Within the US” 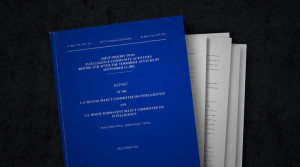 Former Senator: 9/11 Hijackers Had “Support from Within the US”

Former Florida Senator appeared on 60 Minutes recently and dropped a bombshell concerning the Islamic jihad attacks on 9/11. He said what many of us have said all along and that is that the 19 Saudi hijackers had “support from within the US.”

Former Florida Senator Bob Graham, who was also chairman of the Senate Select Committee on Intelligence appeared on 60 Minutes and dropped this bombshell on the American people:

For many, they have questioned those of us who have questioned certain aspects of the official story of the 9/11 Report as conspiracy theorists. Yet, the reality is that now Graham is confirming that.

, would also change a bit of the narrative in the public’s eye.

Graham and his Joint Inquiry co-chair in the House, former Representative Porter Goss (R-FL) — who went on to be director of the CIA — say the 28 pages were excised from their report by the Bush Administration in the interest of national security. Graham wouldn’t discuss the classified contents, but says the 28 pages outline a network of people he believes supported hijackers in the U.S. He tells Kroft he believes the hijackers were “substantially” supported by Saudi Arabia. Asked if the support was from government, rich people or charities, the former senator replies, “all of the above.”

Graham and others think the reason for classifying the pages was to protect the U.S. relationship with ally Saudi Arabia.

In addition to Graham and Goss, Kroft also speaks to former 9/11 Commission members U.S. Sen. Bob Kerrey and former Navy Secretary John Lehman; lawyers for family members of attack victims suing the Kingdom of Saudi Arabia; and to Tim Roemer, former Democratic U.S. Representative from Indiana who was the only person to serve on both Congress’ Joint Inquiry and the 9/11 Commission. All of the former U.S. officials have read the redacted pages. Roemer says it’s time to let everyone know what’s in the top secret documents.

“Look, the Saudis have even said they’re for declassifying it. We should declassify it,” he tells Kroft. “Is it sensitive…a bit of a can of worms or some snakes crawling out of there? Yes,” says Roemer.

This information being aired on mainstream television is nothing short of historical and is a bombshell to those seeking the truth. For over a decade, the families of the victims have demanded the full story on what happened and have only been met with ridicule and closed doors.

Even the 911 commission was railroaded. Not only were the commissioners given extremely limited funds to conduct their investigation, but they were also met with dead ends in almost every direction.

Also, Senator Max Cleland, who resigned from the 9/11 Commission after calling it a “national scandal,” stated in a 2003 PBS interview,

“I’m saying that’s deliberate. I am saying that the delay in relating this information to the American public out of a hearing… series of hearings, that several members of Congress knew eight or ten months ago, including Bob Graham and others, that was deliberately slow walked… the 9/11 Commission was deliberately slow walked, because the Administration’s policy was, and its priority was, we’re gonna take Saddam Hussein out.”

In 2006, the Washington Post reported that several members of the 9/11 Commission suspected deception on the part of the Pentagon. As reported,

“Some staff members and commissioners of the Sept. 11 panel concluded that the Pentagon’s initial story of how it reacted to the 2001 terrorist attacks may have been part of a deliberate effort to mislead the commission and the public rather than a reflection of the fog of events on that day, according to sources involved in the debate.”

While I am not one that does not think Islamists didn’t have anything to do with 9/11, the fact remains that there are countless questions as to what occurred that day. Perhaps if we can get the documents released, it may cause an outrage, since we have been driven to war against Afghanistan and Iraq over these attacks, and yet, we have failed to follow the Constitution regarding a declaration of war, as well as infringing on the rights of law abiding Americans.

1 Comment to “ Former Senator: 9/11 Hijackers Had “Support from Within the US””