Candace Marie Claiborne has become the first Clinton-era State Department employee indicted on treason charges, after a federal grand jury indicted her for conspiring to defraud the U.S. government, concealing contact with foreign spies, obstructing an official proceeding, and making false statements to the FBI. 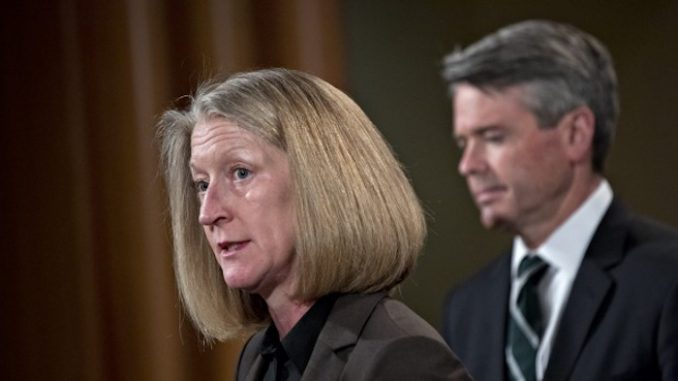 Claiborne, a veteran State Department employee who possessed a Top Secret security clearance, concealed her extensive contacts with Chinese intelligence agents, who for years lavished her with thousands of dollars in gifts as part of a pay-for-play scheme, according to a Department of Justice press release.

In addition to cash payments, Chinese spies provided Claiborne with vacations, an apartment, Apple electronics, and tuition to a Chinese fashion school, according to the indictment. Suggesting she learned tricks from Hillary Clinton, her former boss, Claiborne allegedly told co-conspirators to delete all emails and evidence after getting caught.

The bill of charges contains numerous felonies and Claiborne, 60, is facing spending the rest of her life behind bars, as prosecutors warn she is “the first of many” corrupt Clinton-era State Department employees that will be bought to justice by a reinvigorated DOJ.

“Candace Marie Claiborne is a U.S. State Department employee who possesses a Top Secret security clearance and allegedly failed to report her contacts with Chinese foreign intelligence agents who provided her with thousands of dollars of gifts and benefits,” said Acting Assistant Attorney General McCord.

“Claiborne used her position and her access to sensitive diplomatic data for personal profit. Pursuing those who imperil our national security for personal gain will remain a key priority of the National Security Division.”

He added: “This case demonstrates that U.S. government employees will be held accountable for failing to honor the trust placed in them when they take on such sensitive assignments.”

“Candace Claiborne is accused of violating her oath of office as a State Department employee, who was entrusted with Top Secret information when she purposefully mislead federal investigators about her significant and repeated interactions with foreign contacts,” said Assistant Director in Charge Vale.

“The FBI will continue to investigate individuals who, though required by law, fail to report foreign contacts, which is a key indicator of potential insider threats posed by those in positions of public trust.”

The grand jury found Claiborne’s Washington, D.C. home and her savings account are subject to forfeiture, if she’s convicted.

She wrote in a journal that she could “generate 20k in 1 year” through one of her Chinese agents, according to an affidavit. She was allegedly wired nearly $2,500 shortly after and was asked to provide the U.S. government’s analyses of its 2011 economic talks with China.

According to the Department of Justice’s press release, Claiborne is facing decades behind bars for her crimes:

“The maximum penalty for a person convicted of obstructing an official proceeding is 20 years in prison. The maximum penalty for making false statements to the FBI is five years in prison. The maximum statutory sentence is prescribed by Congress and is provided here for informational purposes. If convicted of any offense, the sentencing of the defendant will be determined by the court based on the advisory Sentencing Guidelines and other statutory factors.”