Foraged Beer Takes Craft Brewing Back to the Land

Foraged Beer Takes Craft Brewing Back to the Land

By sourcing local and wild ingredients, a new movement in brewing looks to reconnect beer to the land that produced it.

Rather than working with ingredients grown on faraway industrial farms, the brewers at Scratch Brewing in Ava, Illinois, incorporate ingredients they find around their Midwestern property. Foraging elements like burdock, dandelion, turmeric, hickory bark, maple leaves, and sumac berries, as well as dozens of other wild botanicals, Scratch co-founders and brewers Marika Josephson and Aaron Kleidon seek to connect their customers with the landscape that produces their beers.

Enthusiasm for locally-made craft beer has grown rapidly in recent years, with more than 5,000 U.S. breweries that currently meet the Brewers Association trade group’s definition. But even if craft beers are brewed in small batches, most of the ingredients get shipped in from industrial farms in other states, or even other countries.

“There is an ironic disconnect in craft beer in which drinkers care a lot about beer being made locally but don’t know or don’t care about where the ingredients themselves are from,” Josephson said.

Scratch, with its on-site brewery garden and commitment to sourcing their hops and malt close to home, is part of a new movement of breweries that want to use foraged beers—beverages brewed with wild ingredients sourced hyper-locally—to educate drinkers about agriculture. And while a growing number are experimenting with adding a foraged beer or two to their tap lists, Scratch, Fonta Flora (in North Carolina), Fullsteam (also in N.C.), and a handful of others are making foraged beers their primary focus. 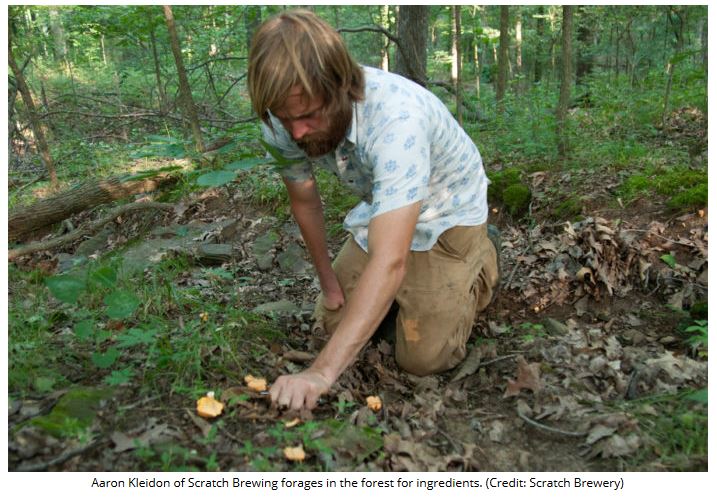 History is on their side. Humans didn’t settle on the modern factory formula of treated water, cultured yeast, malted grains, and cultivated hops until beer first began to be industrialized in Europe early in the Industrial Revolution. As the nascent American craft beer movement grew during the 1970s and 1980s, drinkers began moving away from bland National beers toward breweries with more authentic local and regional brand identities, and this interest has continued to intensify.

While growth among large-scale craft breweries is beginning to stagnate, small brewpubs and breweries are opening at a rapid pace as the popular understanding of “local” grows ever more precise. As consumer interest in local products and farm-to-table foods continues to develop in the U.S., craft beer drinkers are catching on to the foraged beer movement as brewers put intensely local beers back on the map—and as the world’s largest beer companies are tapping into the demand for craft beers.

Eric Steen of Portland, Oregon, founded Beers Made by Walking, a program that leads brewers on forest walks in hopes of inspiring them to create beers more closely tied to their local ecology. On a given walk, a naturalist will lead a group of a few dozen people comprised of both professional and amateur brewers through a local park, pointing out edible and medicinal plants. The participating brewers will then each brew a beer inspired by the walk at their own breweries, with proceeds benefitting local environmental non-profits.

While the program has been a success, Steen is concerned about where increased interest in foraging might lead if it isn’t done responsibly. Steen and others don’t want to see well-meaning but misinformed foragers wandering around fields and forests picking every edible plant in sight, depleting natural resources.

“If people are going out and taking things without knowing the effects that has on the local ecology, that’s a problem” Steen cautioned. “Let’s say brewers want to make beers using wild plums. If a brewer took that food [before] animals could get what they needed, that’s a serious issue. I’m not interested in beers brewed with a sense of place if they ruin that place in the process.” 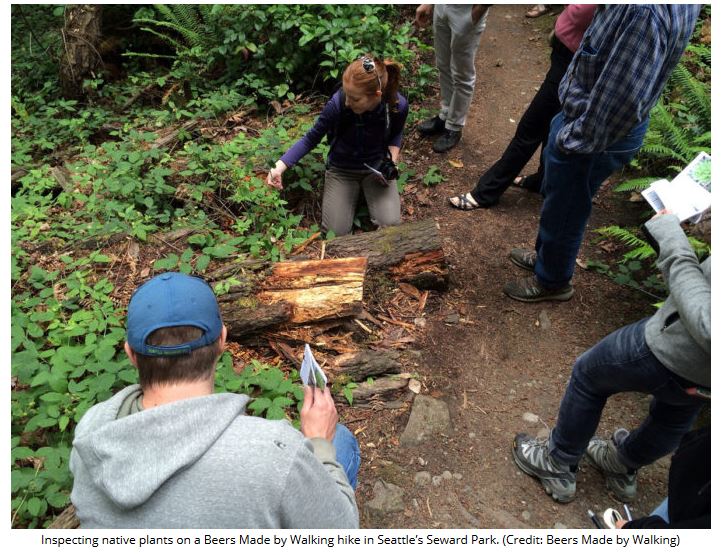 That’s a sentiment echoed by Sean Lilly Wilson, founder of Durham, North Carolina’s Fullsteam Brewery, who relies on foraged ingredients to produce many of his brews. Wilson wants to see a market develop between brewers and responsible foragers and farmers who are close to the land. Rather than wild spaces being pillaged, he’d like to see property owners managing the harvest of these ingredients.

“We want to pioneer a Southern beer economy,” said Wilson, and that means buying local malt as much as possible, as well as putting out calls to a local network of sustainability-minded foragers and growers for more unusual ingredients like persimmons, goldenrod, and spicebush. Wilson and Fullsteam brewer Brian Mandeville pay their foragers a market rate for their findings.

Fonta Flora, located about 170 miles west of Fullsteam in Morganton, N.C., employs a similar model emphasizing sustainability. Founder and brewer Todd Steven Boera’s background in sustainable farming—he worked on the campus farm while enrolled in the sustainable agriculture program at Warren Wilson College in Swannanoa—provided the perfect transition into this unconventional brewing philosophy. That connection to agriculture is still what drives Fonta Flora’s ingredient sourcing.

“I just had a farmer call me last night to say they’d just harvested a bunch of hibiscus roselles, so we’ll be getting those in soon,” said Boera. Paying a market rate for wild ingredients, he now works with a diverse supply network of farmers, private foragers, and ethical produce suppliers in his region.

In addition to the focus on foraging wild ingredients, these brewers hope their efforts will bring attention back to regional growers, as well as the importance of sustainable, small-scale local farming and gardening.

For the last four years, Boera has been brewing a grisette called Bloody Butcher named after an eponymous strain of heritage corn used in the beer, which is grown in small plots by Fox Farms in nearby Burnsville.

“We have varieties of rice and corn that have been grown in the Carolinas for hundreds of years, and we want to showcase those,” said Boera. “I feel it would be a shame if we weren’t able to utilize and showcase the flavors that are coming from those grains.”

In addition, Fonta Flora is establishing its own farm not only to provide ingredients for their beer, but as educational outreach to their community. The brewery’s new nine-acre farm (which Boera hopes to expand) has a fruit grove with paw paw and persimmon trees, elderberry bushes, and other varieties that will ease some of the strain of sourcing these wild fruits.

“You don’t see too many wineries in industrial parks like you do breweries,” said Boera. “Winemaking never really left the farm. Brewing did for a while, and we want to bring the farm back to the beer.”

While fans have asked if Boera plans to grow bulk ingredients like hops and grains, he said his intentions for growing those crops will mostly be educational rather than as a consistent part of his supply chain. 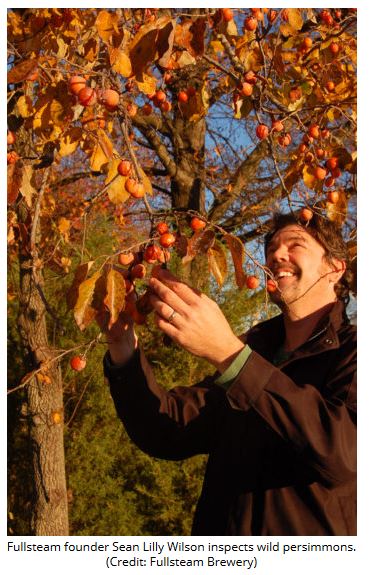 The Challenges of Seasonal Sourcing

The dependence on local and at times esoteric natural ingredients can put breweries at the mercy of the seasonal calendar in a way most craft brewers are not. “The problems [of seasonality] are massive,” said Boera, adding that it’s a problem more conventional breweries who use “seasonal” merely as a marketing term aren’t bothered by.

For the last several years, Fonta Flora has released a saison brewed with locally grown melons. But, this year, the brewing calendar didn’t allow them to get started until the end of the season, when the heirloom melons were beginning to turn. In the end, Boera chose not to release the beer at all in 2017.

Scratch Brewing faced a similar problem this year with one of their most unusual and popular beers, a French-style bière de garde brewed with wild mushrooms. “For the last two years, we’ve had a huge crop of chanterelle mushrooms,” Josephson said. “This year we harvested virtually none, so we won’t have that beer this year.”

“As with food,” she continued, “it’s important that people understand the seasonality of ingredients, and, especially with a changing climate, have a better understanding of what shows up on your plate or in your glass as a reflection of what’s going on with the earth as a whole. Too dry, too much heat at the end of the season—no mushrooms, no beer.”

While being dependent on nature’s whims for ingredients can lead to disappointments, Boera and Josephson both feel it contributes to their ability to help drinkers understand their favorite beverage as a product of the earth. “We tell [the chanterelle] story every time someone asks about when we’ll be releasing that beer next,” said Josephson.

By helping beer drinkers to see beer as an agricultural product, and agriculture as a branch of ecology, brewers like Josephson, Boera, Wilson, and others hope to remind drinkers of the importance of learning about and caring for the natural world, one pint at a time.