By Dani, published on Removing the Shackles, on December 3, 2014

US Congress is “struggling” to come up with their 2015 budget.  I say “struggling” in quotes, because that is an extreme understatement.  By December 11th 2014, US Congress has to come up with a 2015 budget for the government. …. almost two and a half months AFTER the beginning of the 2015 fiscal year began.    Of course, as the elections set up a new floor of mess, the very act of passing anything in congress is a clusterfuk of epic proportions.  Between the Keystone Pipeline insanity, the military budget cut ongoing arguments, the Immigration law fiasco, the begging for Ebola “emergency” funds (for an “outbreak” that the public is refusing to swallow)…… I’m going to go out on a limb here to say, the chances of US Congress coming to an agreement on the 2015 budget before the deadline, is pretty much 0%.

I am going to prognosticate for a moment:

Congress will shut down the government, just as it did in 2014 when they couldn’t get past their squabbles.  Last year, when they couldn’t get anything accomplished, they basically wrote themselves a blank check for the coming fiscal year….. and read below to see how that panned out for them. But, in my opinion, I think that this time there is a much bigger agenda behind the shutting down of the government.  I am watching this very closely, because there are a lot of alarm bells going off in my head right now.

These points are just the main ones that are flashing in neon across my mind in this moment.

The “New” financial system is online….. though not seen yet.  “They” are struggling to”Press the Button” because every time they do, they discover another layer of fraud and lies by various countries (corporations) about their physical assets that are needed for them to be Basel III compliant.  Not only that, but the very basic premise of “asset backed” currencies and financial backing is blatantly being called into question as the public can see the outright fraud in the currency/forex, and commodities/gold/oil/silver markets that are the supposed “backing” or “assets” of Basel III.  This “New” financial system is just slavery 2.0 – that is clearly seen by those working to uncover the information on this.  BUT…. as “they” push ahead with their system of financial corruption, “they” KNOW that it won’t last.

Please watch the next few weeks very carefully.  IF the US government DOES shut down- regardless of whether they spin it as “Oh well, let’s just start our Christmas vacation early this year”  or due to arguments within Congress as the idiots push their agendas- There is something very big afoot.  IF the US government goes into shut down again, watch for the slight of hand that will follow while the public is sipping nog and watching the Grinch steal Christmas. 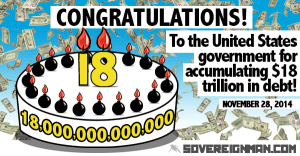 On October 22, 1981, the government of the United States of America accumulated an astounding $1 TRILLION in debt.
At that point, it had taken the country 74,984 days (more than 205 years) to accumulate its first trillion in debt.
It would take less than five years to accumulate its second trillion.
And as the US government just hit $18 trillion in debt on Friday afternoon, it has taken a measly 403 days to accumulate its most recent trillion.
There’s so much misinformation and propaganda about this; let’s examine some of the biggest lies out there about the US debt:
1) “They can get it under control.”
What a massive lie. Politicians have been saying for decades that they’re going to cut spending and get the debt under control.
FACT: The last time the US debt actually decreased from one fiscal year to the next was back in 1957 during the EISENHOWER administration.
FACT: For the last several years, the US government has been spending roughly 90% of its ENTIRE tax revenue just to pay for mandatory entitlement programs and interest on the debt.
This leaves almost nothing for practically everything else we think of as government.
2) “The debt doesn’t matter because we owe it to ourselves.”
This is probably the biggest lie of all. Two of the Social Security trust funds alone (OASI and DI) own $2.72 trillion of US debt.
The federal government owes this money to current and future beneficiaries of those trust funds, i.e. EVERY SINGLE US CITIZEN ALIVE.
I fail to see the silver lining here. How is it somehow ‘better’ if the government defaults on its citizens as opposed to, say, banks?
3) “They can always ‘selectively default’ on the debt”
Another lie. People think that the US government can pick and choose who it pays.
They could make a bing stink about China, for example, and then choose to default on the $2 trillion in debt that’s owed to the Chinese.
Nice try. But this would rock global financial markets and destroy whatever tiny shred of credibility the US still has.
Others have suggested that the government could selectively default on the Federal Reserve (which owns $2.46 trillion of US debt).
Again, possible. But given that the Fed (the issuer of the US dollar) would become immediately insolvent, the resulting currency crisis would be completely disastrous.
4) “It’s the NET debt that’s important”
Analysts often pay attention to a country’s “net debt” instead of its gross debt. If you have a million bucks in debt, and a million bucks in cash, then your ‘net debt’ is zero. It washes out.
Problem is, the US government doesn’t have any cash. The Treasury Department opened its business day on Friday morning with just $71.9 billion in cash, or just 0.39% of its total debt level.
Apple has more money than that.
5) “They can fix it by raising taxes”
No they can’t. Just look at the numbers. Since the end of World War II, US government tax revenue has consistently been roughly 17% of GDP.
They can raise tax rates, but it doesn’t move the needle in terms of revenue as a percentage of GDP.
In other words, the government’s ‘slice of the pie’ is pretty consistent.
You’d think with this obvious data that, rather than try to increase tax rates (ineffective), they’d do everything they can to help make a bigger pie.
Or better yet, just leave everyone the hell alone so we’re free to bake as much as we can.
But no. They have to regulate every aspect of people’s existence: How you are allowed to educate your children. What you can/cannot put in your body. How much interest you are entitled to receive on your savings.
All of this costs time, money, and efficiency. So do never-ending wars. The bombs. The drones. The airstrikes.
This isn’t about any single person or President. The problem is with the system itself.
History shows that every leading superpower from the past almost invariably fell to the same fate.
Great powers often feel that their wealth and success entitles them to spend recklessly and wage endless, arrogant wars. The Romans. The Ottoman Empire. The British.
History may not repeat but it certainly rhymes. And the lesson here is very clear: debt weakens a nation. It weakens a society.
Generations that will not even be born for decades will inherit these debts by complete accident of birth.
And the people in charge of the system have backed themselves into a corner where there is no way out other than to default– either on their creditors (creating a global financial crisis), the central bank (creating a currency crisis), or on the citizens themselves (creating an epic social crisis).

1 Comment to “ Five lies about America’s Debt, or How the Grinch Steals Christmas”