New research suggests that modern humans were living in Saudi Arabia about 85,000 years ago.

This adds to mounting evidence from Israel, China and Australia, of a widespread dispersal beyond Africa as early as 180,000 years ago.

Previously, it was theorised that Homo sapiens did not live continuously outside Africa until 60,000 years ago.

The study is published in Nature Ecology and Evolution.

Previous digs in the Arabian interior have uncovered tools which could have been used by early Homo sapiens. But skeletal evidence of their presence has been lacking. 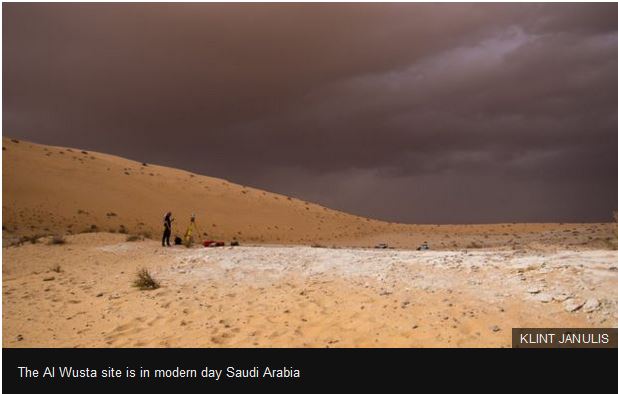 A trace of evidence

Researchers working at the Al Wusta site in Saudi Arabia came across a single intermediate phalanx (the middle of the three bones that make up a finger) in a preserved lake bed.

No other remains of its owner were found.

“It’s normal,” explained Dr Huw Groucutt, the study’s lead author. “Almost all humans and animals that ever lived will disappear without trace.

“We got very lucky. Generally if you found one piece of an individual you wouldn’t be able to tell. But it turns out that bone is quite distinct,” the University of Oxford researcher added.

The team used CT scanning to build a 3D model of the bone, and compared it to other human and Neanderthal remains from this time period.

It was found to most closely resemble Homo sapiens, as Neanderthal bones are shorter and squatter.

Other material from the site was dated using two separate dating techniques. 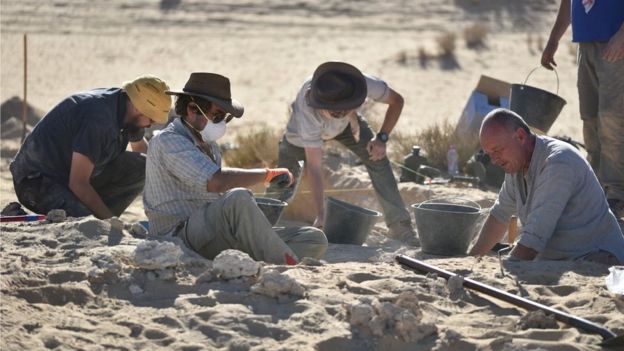 A matter of climate

The climate in Saudi Arabia 85,000 years ago was very different to the modern day.

Monsoon rains created lush lakes, inhabited by animals much like hippos. Wild cattle and antelope also appear to have migrated from Africa at this time.

The fossil record at Al Wusta shows a rich variety of animal life, alongside stone tools that closely resemble those used by Homo sapiens.

Dr Groucutt believes humans may have chosen to move in to this inviting environment.

“The interesting thing,” he told BBC News, “is that in the past some people have said we couldn’t really spread into Asia until we had complex tools. [Our findings] suggest that that kind of migration didn’t really reflect a technological breakthrough, but reflects climate change.”

Recent work in South Africa also points to the influence of changing climate on human evolution. 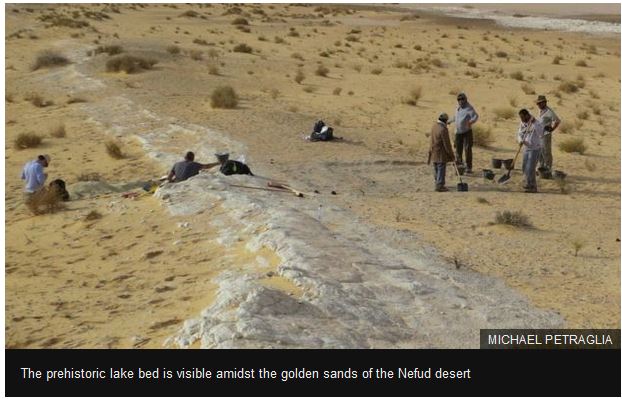 Although it is hard to determine from the Saudi Arabian site, human occupation of the area seems to have been short-lived; restricted to a few hundred or a couple of thousand years.

It is not known whether the population died out or simply chose to move on.

“The great mystery now is what happened to these people,” added Dr Groucutt.

Genetic evidence suggests all living non-Africans trace their ancestry to an exodus from the continent around 60,000 years ago. Researchers are now trying to reconcile this DNA data with the mounting archaeological evidence that Homo sapiens was present outside Africa much earlier.

One possibility is that these pioneer populations went extinct, to be replaced by a later wave that led to the rest of the world being permanently settled by our species.