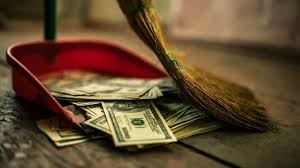 I spent the day in a financial wisdom workshop yesterday, led by an enlightened fella who, after leaving school at 15, gave himself a financial education at the school of hard knocks. He is something of a guru; for who he is, as much as for what he has achieved; teaching ‘ordinary’ people how the wealthy manage to live the way they do, in the world in which we live.

Meanwhile in South Africa, the Ubuntu Party is contesting an election, with the promise of creating a moneyless society, based on the most noble of ancient beliefs that what is not good for all of us is not good for any of us. The question that seems to come up around this idea most often, is what will we do then? There’s a short clip from Star Trek below addressing this. Life it seems is once again imitating art.

What came up for me the most strongly yesterday, was my outrage and out & out disgust at the disparity of the world we live in. The figures are astonishing… something like 99% of the world’s wealth accumulated by 1% of the people on our planet. But let me put that to the side for a moment. Where we are is where we are, what is is what is and then there is what we going to do about it…

Yesterday we were playing the cash flow game, by Robert Kiyosaki. In the process something shifted & my experience went from being nervous about money, not even wanting to play the game, to seeing how it worked and getting excited. All of a sudden I understood the rules of the game and what was possible arose within me. I could win at this game! I also noticed a competitiveness arise, becoming less conscious of how the people around me were doing (three of them were unemployed in the game at this stage).

Two days ago I took in the scope of the world’s range of human experience through the eyes of the film ‘Samsara’.  Simply by virtue of living in Australia, I am amongst the most wealthy people on the planet and I have never come to terms with that. I have also never taken advantage of it. Guilt perhaps. I find it fascinating that people from overseas come here, see the extraordinary opportunity and take advantage of it, while I familiar and all too accustomed perhaps to privilege, have done so little.

What comes up when you play Robert Kiyosaki’s game, is one’s beliefs around money. I have a belief that money can make you less of a human being. I guess I have been afraid of that and of the possible disapproval and distancing from my family and friends. Jesus said that ‘the love of money is root of all kinds of evil’, 1 Timothy 6.10. It points to the hearts of men..

In all of this exploration, mostly what I yearn for, is the day described in the clip below; when men are ‘no longer obsessed with the accumulation of things, we have eliminated hunger, want, the need for possessions; we have grown out of our infancy.’ I see this day coming sooner than we might think. I am also learning to play the game.