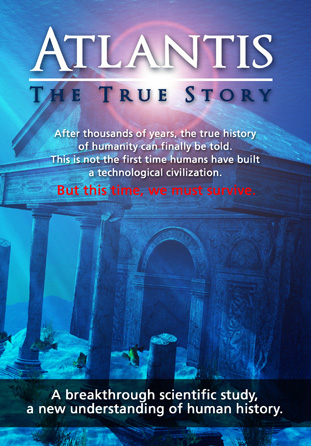 Not long ago, a technologically advanced human civilization thrived on Earth. This was Atlantis, the real Atlantis, not a mythological story. Here—documented with new scientific data—is the true story of their demise. They were not undone because of a natural cataclysm. Rather, through the reckless misuse of their own science, they destroyed their civilization. Only a few thousand people survived, and everyone on Earth today is related to that same small group of survivors.

This is a breakthrough scientific study conducted at The Farsight Institute that combines the use of remote viewing, Google Earth imagery, a touch of genetic knowledge, and a hefty amount of open-minded thinking. Remote viewing is a mental process that was originally developed by the United States military and used for espionage purposes. The Farsight Institute is the leading civilian venue for full public projects using remote viewing as it is done using those same methods, or procedures that are derivative of those methodologies. Using remote-viewing data collected by two of the most well-trained and talented remote viewers of the day, the true story of what happened when Atlantis collapsed is told with striking detail and clarity.

Forget what you learned in school about human civilization being a recent phenomenon. All that you see today, all the wonders of human achievement, have all been done before. And it all ended very badly. This time, we need to learn from our past mistakes. We humans have a complicated history on this planet. We need to discover that history, not censor it, if we are to be a species with a destiny. Let us begin that process of discovery here, today, now.