Extraterrestrial rock found in Egypt looks like nothing found in our solar system before, scientists say

Extraterrestrial rock found in Egypt looks like nothing found in our solar system before, scientists say

by Andrew Griffin, published on The Independent, on January 11, 2018 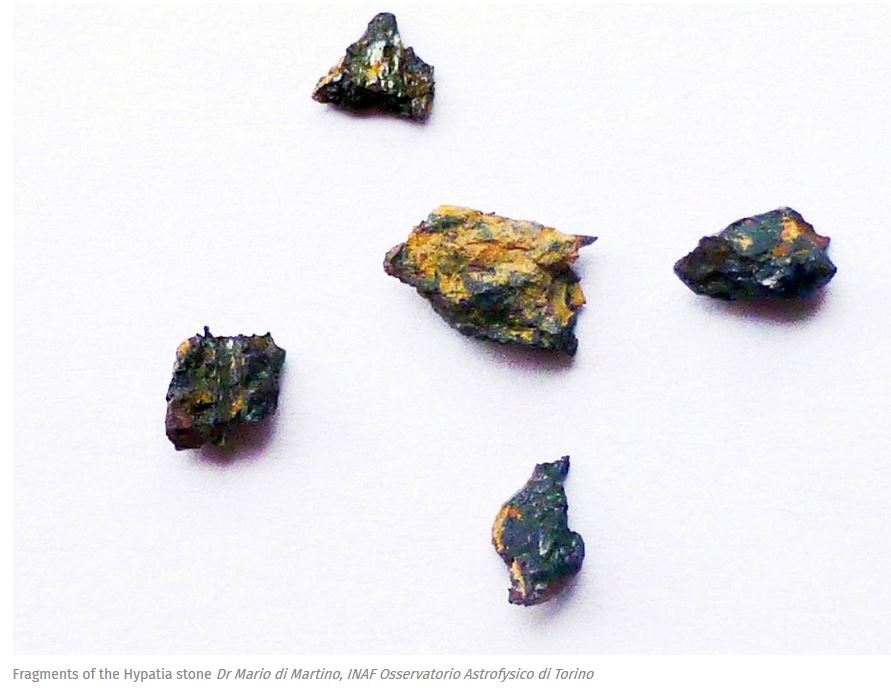 Mysterious extraterrestrial rocks are unlike anything ever found on Earth, according to scientists.

The Hypatia stone – pebbles found in Egypt, which once came from a huge rock that was several metres wide – have long been known to have come to Earth from somewhere else. But new research shows they are even more alien than we thought, having been formed outside of our solar system and even before our sun existed.

That’s the conclusion of new research that looked at how the strange rocks were formed, by exploring what minerals can be found inside them.

In 2013, the rocks were found not to have come from Earth, and two years later scientists confirmed that they had not come down to Earth as part of any known meteor or comet. The new work aimed to look at the minerals found inside and find how they were made up.

“When Hypatia was first found to be extraterrestrial, it was a sensation, but these latest results are opening up even bigger questions about its origins,” said Dr Marco Andreoli, a research fellow at the School of Geosciences at the University of the Witwatersrand, and a researcher on the study.

Jan Kramers, the professor who undertook the new study, said that the internal structure of the rock was something like a fruitcake that had fallen and broken across. By looking at the various bits of fruits that are found inside, they can try and understand how the rock was formed and where ti came from.

“We can think of the badly mixed dough of a fruit cake representing the bulk of the Hypatia pebble, what we called two mixed ‘matrices’ in geology terms,” said Professor Kramers. “The glace cherries and nuts in the cake represent the mineral grains found in Hypatia ‘inclusions’. And the flour dusting the cracks of the fallen cake represent the ‘secondary materials’ we found in the fractures in Hypatia, which are from Earth,” he says.

The mixture of that dough looks like nothing ever before seen on Earth. Usually, scientists would expect to see a little bit of carbon and lots of silicon – but the rock is made up the complete opposite way around.

Not only is that mix unlike anything ever seen on Earth, the individual materials that make it up appear to have been formed in the pre-solar time. That means it was formed before our own sun or solar system, opening up further questions about where it came from.

Scientists now hope to look even more deeply at the rock and understand where it came from. What they understand of it suggests that it came from somewhere vastly different from Earth, however.

“What we do know is that Hypatia was formed in a cold environment, probably at temperatures below that of liquid nitrogen on Earth (-196 Celsius). In our solar system it would have been way further out than the asteroid belt between Mars and Jupiter, where most meteorites come from. Comets come mainly from the Kuiper Belt, beyond the orbit of Neptune and about 40 times as far away from the sun as we are. Some come from the Oort Cloud, even further out. We know very little about the chemical compositions of space objects out there. So our next question will dig further into where Hypatia came from,” said Professor Kramers.