The manhole cover blew in front of the Federal Reserve building, prompting slight panic in the area. 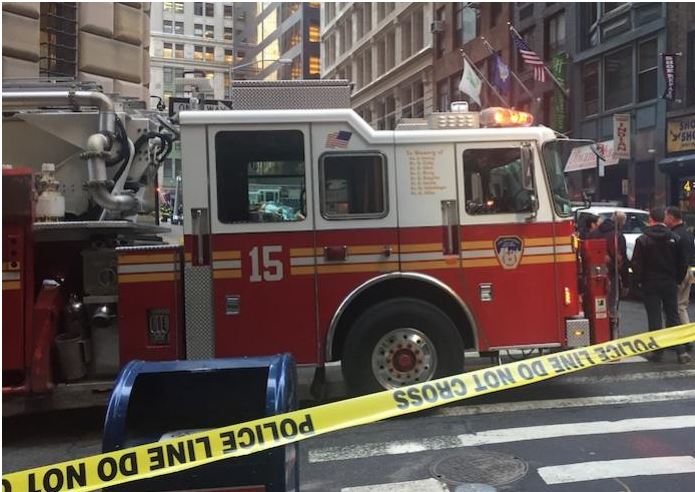 The sound of a massive explosion rocked Manhattan’s Financial District Thursday afternoon, causing alarm and at least one minor injury.

The boom rang out around 4:15 p.m. on Nassau Street between Liberty Street and Maiden Lane alongside the Federal Reserve building. FDNY officials said a manhole cover blew, and ConEd said they got reports of a smoking transformer and that crews were en route. A Metro reporter at the scene said responders had stretchers at the ready on Maiden Lane, but it was loaded back into the ambulance without anyone needing treatment.

However, just before 5:30 p.m., FDNY tweeted that multiple buildings in the area have “high levels of CO” and one person suffered a non-life-threatening injury.

#FDNY is on scene of a blown transformer at 28 Liberty St in Manhattan. There are multiple buildings with high levels of CO. There is currently one non-life-threatening injury reported pic.twitter.com/j7WNdjBZDT

Startled New Yorkers ran from the area immediately after the blast. Police and fire officials taped off the surrounding streets. A security official at the Equitable Building nearby said there was no immediate threat or cause for alarm. Witnesses used Citizen App to document what unfolded after the explosion, with onlookers claiming a vehicle had been damaged.

Tania Santiago heard “what sounded like an explosion or a piece of metal being dropped” from her office on the 29th floor of 1 Liberty Street. She chalked it up to some of the nearby construction taking place and came down to the street, where she stood on the corner of Liberty and Nassau with a crowd of bystanders.

A Downtown Alliance security officer who was patrolling near Cedar Street and Broadway told Metro he “thought it was thunder.”

About 20 minutes after the first explosion, a second big boom was heard, and NYPD officers on the scene urged the crowd to move back.