EXCLUSIVE: ‘I’ve Been Scared Every Day’: Seattle Resident Speaks Out About Life On The Border Of CHAZ 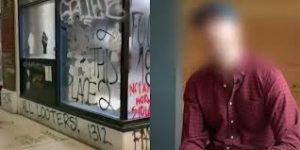 EXCLUSIVE: ‘I’ve Been Scared Every Day’: Seattle Resident Speaks Out About Life On The Border Of CHAZ

A Seattle resident living in Capitol Hill, where activists have taken over a roughly six-block radius and turned it into the “Capitol Hill Autonomous Zone” (CHAZ), spoke with the Daily Caller in an exclusive interview about life on the border of the commune.

The man, who asked to only be referred to as Brandon, said he has been terrified since the protests began. Brandon said protesters are at his gates every night, adding that his “own government” has abandoned the people.

“I’m scared,” Brandon said. “I’ve been scared every day since Sunday, and I haven’t gotten a lot of sleep. For the first time in my life in Capitol Hill, I hear gunshots every single night. I’ve heard people screaming every single night outside. And they’re not protest screams … I’ve also heard screams of terror out there, and I don’t know what’s happening out there.”