by Cassandra Fairbanks, published on The Gateway Pundit, on July 5, 2018

The Alternative for Germany (AfD) has filed criminal charges against seven German NGO’s for human trafficking — including Doctors Without Borders.

The Gateway Pundit has exclusively obtained copies of the charges. 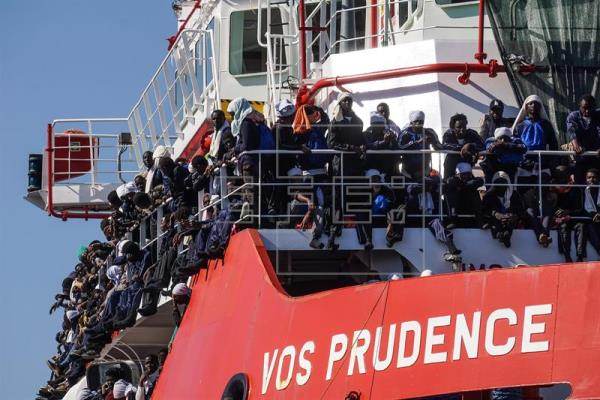 The groups being charged are Against SOS Mediterranee, Sea-Watch, Doctors without Borders Germany, Save The Children Germany, Jugend Rettet (all Berlin), Mission Lifeline (Dresden) and Sea-Eye (Regensburg).

The controversial NGOs have come under scrutiny lately for their efforts picking up illegal immigrants off the coast of Libya under the pretense they are “being rescued from drowning” and bringing them to Europe.

The Italian government recently announced that they are closing their ports to these “humanitarian” ships in an effort to stop the illegal migration. Malta has since impounded multiple Sea-Watch vessels that are sponsored by the Lutheran Church in Germany using taxpayer funds.

The captain of a ship run by Dresden-based Mission Lifeline, Claus-Peter Reisch, has also been arrested in Malta and charged with sailing under false flag. He has since been released on bail, but must remain on Malta until trial.

The charges being filed by AfD are based on a German law against human trafficking (Aufenthaltsgesetz §96)  which deems it a crime to “aid or assist in illegal immigration repeatedly or on behalf of several foreigners, or for profit”. They are supported by all 92 members of parliament of the AfD, and was conceived by Petr Bystron, a former Czech refugee who is now AfD spokesman on the Foreign Committee of the German Bundestag.

Bystron is the Speaker of the Alternative for Germany party (AfD) on the Foreign Policy Committee of the German Bundestag. He went to Germany in 1988 as a political refugee and joined the AfD in 2013. He was chair of the AfD for the State of Bavaria 2015-2018. He is currently one of the top ten most popular German politicians on social media.

According to the AfD, the NGOs use their people-trafficking activity to acquire donations totalling millions of Euros. SOS Mediterranée has an annual  budget of around €4 million, Sea-Watch €1.7 million, Sea-Eye €500.000 and Mission Lifeline (which just began raising money in Fall of 2017) €250.000.

“Malta did the only sensible thing,” Bystron told Gateway Pundit. “The German captain of Mission Lifeline Claus-Peter Reisch will be tried in Malta, his vessel was impounded. These long overdue steps send a clear signal to all the illegal people-smugglers active in the Mediterranean, and to the world: These NGOs are human traffickers and radical leftist No Borders activists, not humanitarian life-savers. They need to be punished, not supported.”

Many of these NGOs come from Germany – the same country which plunged Europe into the migrant crisis thanks to Chancellor Angela Merkel’s throwing open the borders and providing generous welfare, health care and housing in Germany to anyone claiming to be a refugee. The NGOs have long enjoyed the support of legitimate political parties and the media, who often obtain their news coverage directly from the NGO press departments.

“It is time to finally call a spade a spade and a crime a crime. Many other European countries have understood this, and closed their borders to mass illegal immigration. 80% of Italians now support Matteo Salvini’s course, and the mood among the citizens in Germany has begun to change as well. It is only the media and politicians who continue to tubthump for illegal mass migration against all reason and the interests of their own people”, said Bystron.

“We will follow the investigation closely to make sure prosecutors are not subjected to undue political pressure from the many allies of the accused, and keep Gateway Pundit advised of our progress,” Bystron said.