EXCLUSIVE: Are AMERICANS being held in the round-up of Saudi princes and billionaires? 17 Western men are among those detained and ‘tortured’ by crown prince in luxury hotel, claims source inside secretive kingdom

EXCLUSIVE: Are AMERICANS being held in the round-up of Saudi princes and billionaires? 17 Western men are among those detained and ‘tortured’ by crown prince in luxury hotel, claims source inside secretive kingdom

By Ryan Parry West Coast Correspondent, published on The Daily Mail, on December 27, 2017

Seventeen American, British and French businessmen are being held in Saudi Arabia as part of a sweeping anti-corruption crackdown, a source in the secretive kingdom has told DailyMail.com.

The men – eight U.S. citizens, six British and three French – were held in a round-up of billionaires and princes ordered by Crown Prince Mohammed bin Salman, the source said.

The prince, known as MBS, has said the arrests were to end corruption but others see them as a consolidation of his power. The targets are known to have included one of the world’s wealthiest men, Prince Alwaleed bin Talal, whose portfolio includes stakes in Uber, Twitter and Citigroup. 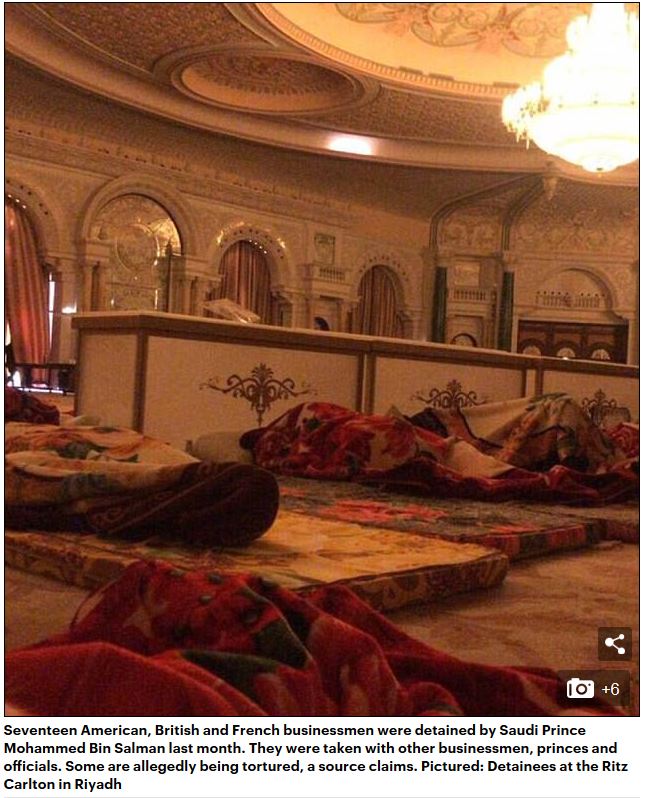 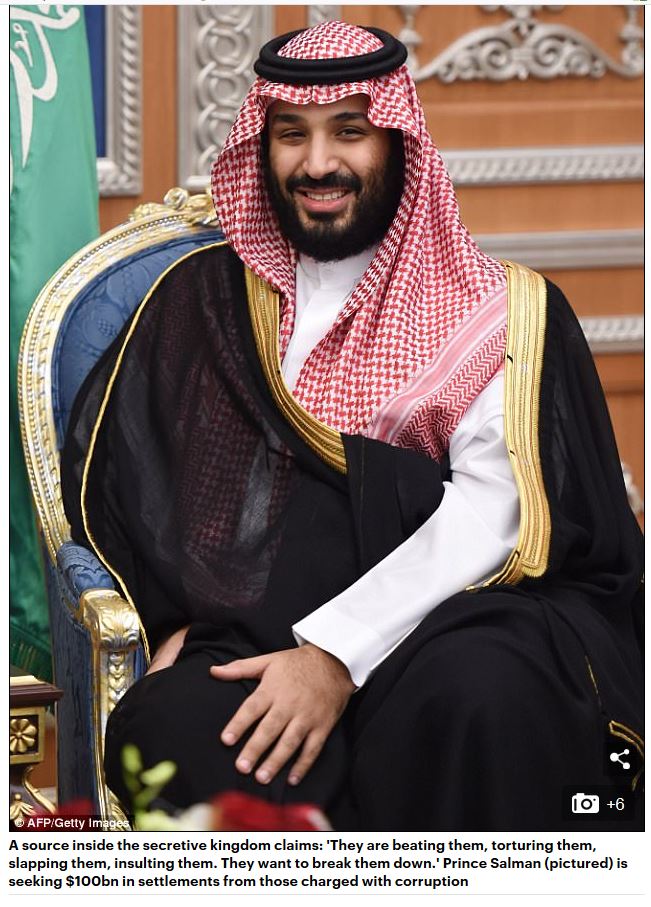 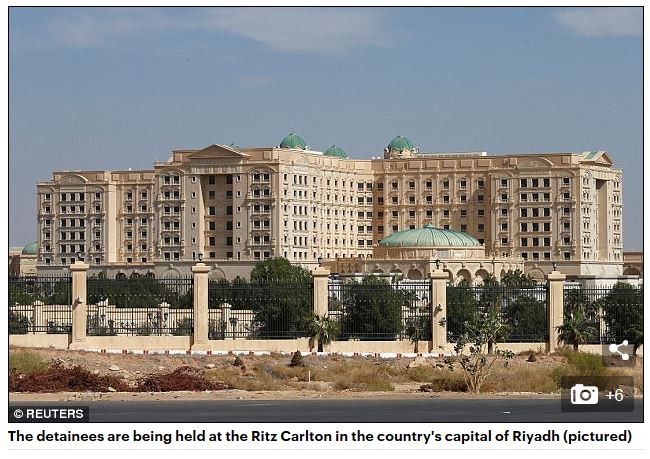 The source – who has knowledge of MBS’s thinking – said the men were among those being held at the Ritz Carlton in Riyadh, a five-star hotel, which has become the world’s most luxurious prison.

The source also said that some of the 17 businessmen were among the detainees who had been tortured by Saudi authorities.

Each of them were in the country on work permits, the source said, suggesting they were long-time expatriate residents rather than visiting businessmen.

‘They are beating them, torturing them, slapping them, insulting them. They want to break them down,’ the source, who has knowledge of the top levels of the Saudi government, said.

DailyMail.com was unable to verify the source’s claims independently.

A spokeswoman for the Saudi Embassy in Washington said the country’s public prosecutor was ‘complying with the relevant laws and regulations’ over the arrests and declined to discuss who had been arrested and whether any non-Saudis were caught in the dragnet.

Under normal circumstances detained foreign nationals have the right to contact their country’s embassy to ask for assistance.

The State Department said it could not comment on individual cases due to ‘privacy considerations’ and declined to say if it had been asked for assistance by attorneys or families of U.S. citizens in the wake of the round-up.

‘The Department of State takes its obligation to assist U.S. citizens abroad seriously.

‘When we are notified of the arrest of a U.S. citizen, we immediately seek to visit him or her. Due to privacy considerations, we have no further comment,’ said a spokesperson.

The UK Foreign and Commonwealth Office said they have not been contacted by any British citizens in Riyadh for assistance, and the French foreign office declined to comment.

If the men had not contacted their embassies through their families or legal representatives, it would be possible for the U.S., UK and France to say they were unaware of the arrested – but the high-profile nature of MBS’s actions makes it unlikely that key allies could be unaware that Saudi Arabia was holding its citizens in open-ended detention.

MBS rounded up 11 of his fellow princes, hundreds of businessmen and government officials in an alleged corruption crackdown on November 4, just a week after a high-profile investment conference welcomed leaders of some of the world’s largest companies to the kingdom.

The Saudi government claims that detainees, including former princes who have now been stripped of their titles, have admitted to systemic bribery of a network of scores of foreign officials. 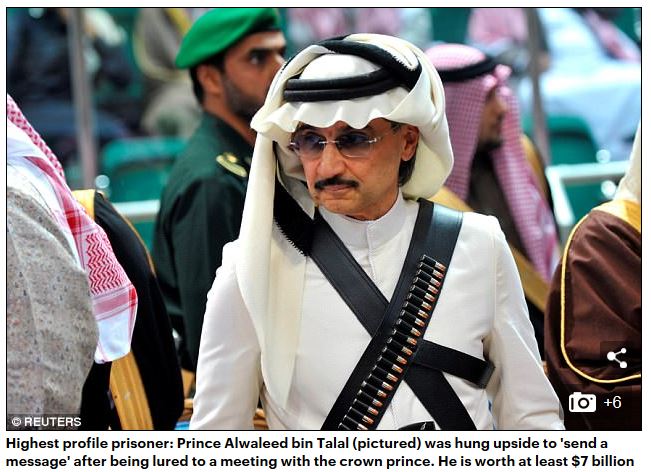 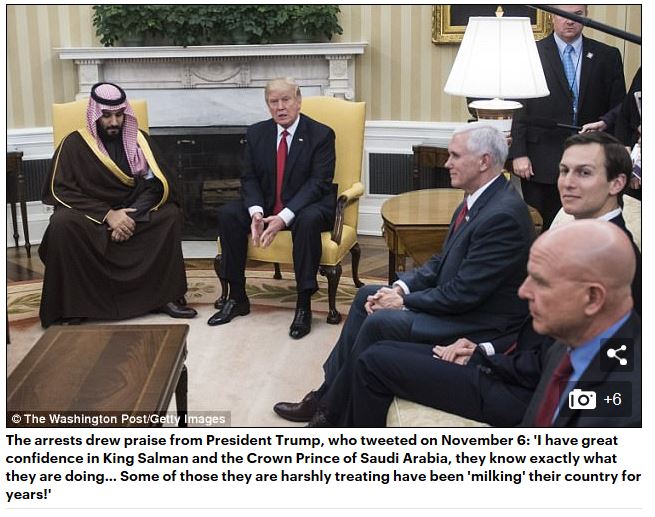 Despite the draconian crackdown, Crown Prince Salman, 32, seeks to portray himself as a modernizing influence on the Arab country, advocating women drivers and vowing to promote a ‘moderate, open Islam’ in Saudi Arabia.

The arrests drew praise from Trump, who tweeted on November 6: ‘I have great confidence in King Salman and the Crown Prince of Saudi Arabia, they know exactly what they are doing… Some of those they are harshly treating have been ‘milking’ their country for years!’

Many of the more than 200 detainees have been held under armed guard at the opulent Ritz Carlton Hotel in the country’s capital, Riyadh.

DailyMail.com disclosed that despite the five-star status of their prison, they were being made to sleep on thin mattresses on a function room’s floor, and that some of the arrested princes and officials have been ‘tortured’, hung upside down and beaten during interrogations.

Among those said to be hung upside down are Prince Alwaleed.

A doctor at a hospital in Riyadh and a US official told the New York Times that as many as 17 detainees needed medical treatment after interrogations.

The Saudi Arabian prosecutor is seeking $100 billion in settlements from those charged with corruption, while the Riyadh Chamber of Commerce and Industry says the revenue lost to alleged grafting by the arrested princes and officials could total as much as $800 billion.

The Crown Prince said last month that ’95 percent’ of the suspects charged with corruption have agreed to a settlement.

‘We show them all the files that we have and as soon as they see those about 95 percent agree to a settlement,’ Salman told the New York Times.

‘About one percent are able to prove they are clean and their case is dropped right there. About four percent say they are not corrupt and with their lawyers want to go to court.’

Salman added that his public prosecutor says it could eventually ‘be around $100 billion in settlements.’

Saudi authorities want at least $6 billion from Prince Alwaleed to secure his freedom, the Wall Street Journal, which quoted sources who said he is trying to strike a deal for his release, reported earlier this month.

The prince is the 57th-richest person in the world with an estimated $18 billion fortune, his own yacht, and a personalized private Boeing 747 with a gilded throne.

His arrest was the most shocking of the crackdown, as he had been a prominent public face of the kingdom until days beforehand.

His final appearance in public was an interview with CNBC’s Squawk Box in which he praised President Trump and said bitcoin would implode. Days later he was arrested.

Arrests of expatriate Americans, British and French citizens in Saudi are highly unusual.

Although the country has an estimated 11 million guest workers, the vast majority are from India, Pakistan, the Philippines and African countries, providing the kingdom with a pool of cheap labor.