An ex-spy chief who spoke out publicly against Trump while inspiring other career intelligence figures to follow suit has admitted his leading role in the intelligence community waging political war against the president, describing his actions as something he didn’t “fully think through”. In a surprisingly frank interview, the CIA’s Michael Morell – who was longtime Deputy Director and former Acting Director of the nation’s most powerful intelligence agency – said that it wasn’t a great idea to leak against and bash a new president.

Morell had the dubious distinction of being George W. Bush’s personal daily briefer for the agency before and after 9/11, and also served under Obama until his retirement. In the summer of 2016 he took the unusual step (for a former intelligence chief) of openly endorsing Hillary Clinton in a New York Times op-ed entitled, I Ran the C.I.A. Now I’m Endorsing Hillary Clinton, after which he continued to be both an outspoken critic of Trump and an early CIA voice promoting the Russian collusion and election meddling narrative. 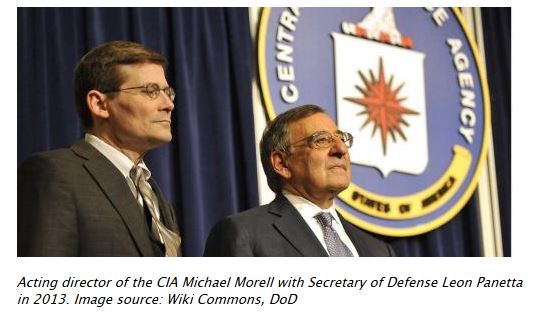 As Politico’s Susan Glasser put in a newly published interview, Morell “has emerged out of the shadows of the deep state” to become one of Trump’s foremost critics speaking within the intel community. However, Politico summarizes the interview as follows:

But in a revealingly self-critical and at times surprising interview for this week’s Global POLITICO, Morell acknowledges that he and other spy-world critics of the president failed to fully “think through” the negative backlash generated by their going political. “There was a significant downside,” Morell said in the interview.

Not only had Morell during his previous NYT op-ed stated that he was committed to doing “everything I can to ensure that she is elected as our 45th president” but he went so far as to call then candidate Trump “a threat to our national security” – while making the extraordinary claim that “in the intelligence business, we would say that Mr. Putin had recruited Mr. Trump as an unwitting agent of the Russian Federation.”

Curiously, Morell in his latest Politico interview indicates when asked about his “public profile” and activism so soon after leaving the agency (something that was relatively unusual prior to Trump taking office) that his post-retirement media appearances have been approved and/or received some level of oversight by the CIA. In the interview Morell states, “I did a 60 Minutes interview about my life inside CIA, and it’s something the agency thought that was a good thing to do, and I taped most of it before I left the agency.”

While such CIA review of former employees’ publications and media interaction is nothing new, in Morell’s case was an unprecedented example of a very high profile intelligence figure explicitly campaigning for a presidential candidate and against another while specifically invoking his role at the CIA (he began his NYT column with, “During a 33-year career at the Central Intelligence Agency, I served presidents of both parties — three Republicans and three Democrats…” followed by a litany of key national security events he was central to).

The other important confirmation to come out of the discussion is the clear guiding assumption of the interview – that the intelligence “deep state” did in fact go to war with Trump – which has now been confirmed by Morell himself, which is essentially to hear it straight from the horse’s mouth. 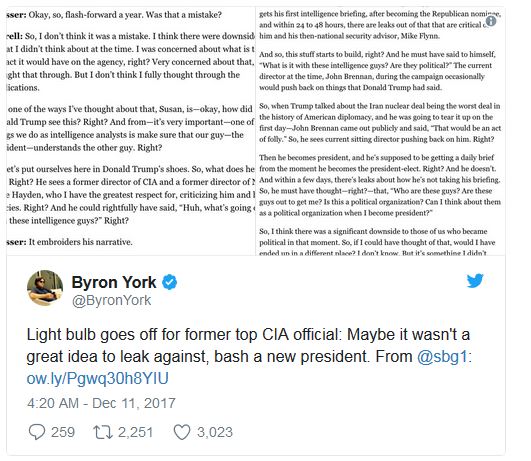 The key exchange in the Politico interview begins as follows:

Glasser: Okay, so, flash-forward a year. Was that a mistake?

And one of the ways I’ve thought about that, Susan, is—okay, how did Donald Trump see this? Right? And from—it’s very important—one of the things we do as intelligence analysts is make sure that our guy—the president—understands the other guy. Right?

So, let’s put ourselves here in Donald Trump’s shoes. So, what does he see? Right? He sees a former director of CIA and a former director of NSA, Mike Hayden, who I have the greatest respect for, criticizing him and his policies. Right? And he could rightfully have said, “Huh, what’s going on with these intelligence guys?” Right?

Morell here seems to confirm Trump’s narrative of events concerning Russiagate “fake news” and willful intelligence leaks intended to damage the president, despite his opening obfuscation of “I don’t think it was a mistake” (so he’s essentially admitting the negative consequences but with no regrets).

Surprisingly, Morell even implicates himself with the words, “And then he sees a former acting director and deputy director of CIA criticizing him and endorsing his opponent.”  The interview continues:

Glasser: It embroiders his narrative.

Morell: Exactly. And then he sees a former acting director and deputy director of CIA criticizing him and endorsing his opponent. And then he gets his first intelligence briefing, after becoming the Republican nominee, and within 24 to 48 hours, there are leaks out of that that are critical of him and his then-national security advisor, Mike Flynn.

And so, this stuff starts to build, right? And he must have said to himself, “What is it with these intelligence guys? Are they political?” The current director at the time, John Brennan, during the campaign occasionally would push back on things that Donald Trump had said.

So, when Trump talked about the Iran nuclear deal being the worst deal in the history of American diplomacy, and he was going to tear it up on the first day—John Brennan came out publicly and said, “That would be an act of folly.” So, he sees current sitting director pushing back on him. Right?

Then he becomes president, and he’s supposed to be getting a daily brief from the moment he becomes the president-elect. Right? And he doesn’t. And within a few days, there’s leaks about how he’s not taking his briefing. So, he must have thought—right?—that, “Who are these guys? Are these guys out to get me? Is this a political organization? Can I think about them as a political organization when I become president?”

So, I think there was a significant downside to those of us who became political in that moment. So, if I could have thought of that, would I have ended up in a different place? I don’t know. But it’s something I didn’t think about.

Despite Morell’s attempts to mitigate his own significant contributions toward creating a climate of distrust between the White House and the intelligence bureaucracy, it seems clear to the interviewee that Morell’s admissions lend credence to Trump’s side.

Indeed, Susan Glasser reasons, based on Morell’s unexpected confessions, that “you or others who spoke out and have continued to speak out actually tend to underscore his feeling that there’s a political divide.”

Glasser: Well, it’s very interesting, because of course, there are so many things you don’t know at that moment in time, including, of course, I’m sure you assumed, along with everybody else, that Hillary Clinton was likely to be elected, and you saw this as contributing to that in some way. But it’s certainly relevant in the context of the situation we find ourselves in a year later. And, if it tends to embolden Trump in his critique of your former colleagues who are still serving in the intelligence agencies, and not only has this been a theme that he has struck repeatedly to criticize—but also to politicize this.

And inadvertently, perhaps, you or others who spoke out and have continued to speak out actually tend to underscore his feeling that there’s a political divide, and now you and others are on one side of it, and potentially all your former colleagues, and then he’s on the other side of it…

Morell: Yeah, and you can’t pick and choose like that. And when people in the intelligence community—particularly people in CIA, because for every other part of the intelligence community except CIA, you’re working for a cabinet member. At CIA, you are working for the president of the United States. That is your customer. Right? 00:08:03 So, when you see your customer questioning what it is that you are providing to him or her, and that person seems to be cherry-picking what they accept and what they don’t accept, it’s demoralizing. And when it’s demoralizing, people take actions, right? So, I live pretty close to the agency, and there’s a coffee shop between me and the agency, and I’ve met a number of agency officers in that coffee shop who have said to me, “I’m thinking about leaving.”

Yet Morell in a round about way previously admitted that he is personally one of the chief authors of precisely this “demoralizing” scenario in which the president doesn’t fully trust his intelligence briefers.

But we should all remember that this is a man who on the one hand described “Russia’s hacking is the political equivalent of 9/11” and constantly hyped “Russian propaganda”, while on the other he went on a lengthy RT News segment in order to promote his newly published book.