by Matt Agorist, published on Activistpost, on April 4, 2017 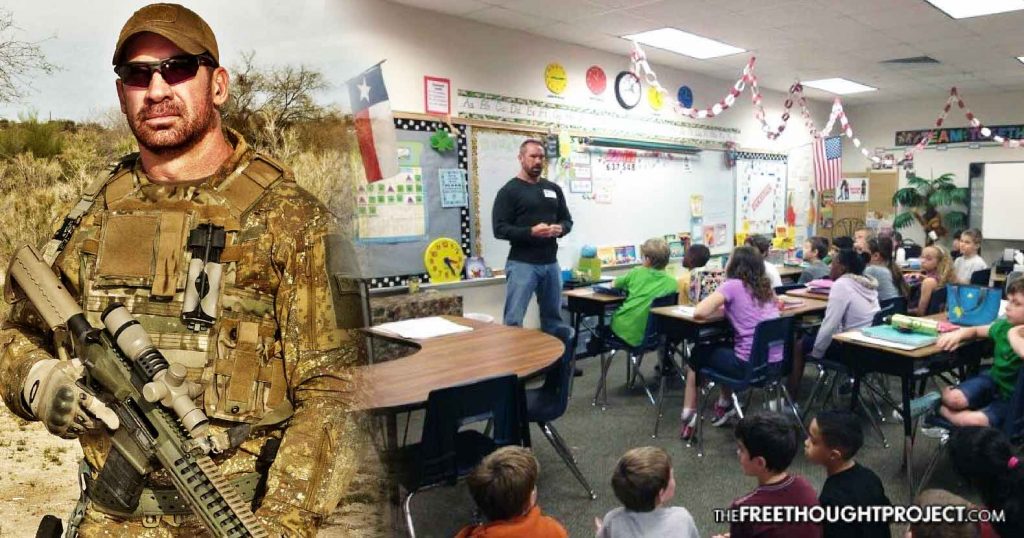 To those paying attention, they are able to see the world has a horrifying problem with pedophilia and child trafficking. They are also able to see that the corporate media and the ruling class do very little to expose it — and, in fact, are often exposed for participating in it. However, an ex-Navy SEAL and several other veterans are attempting to stop this.

Veterans For Child Rescue (V4CR), as they note on their new website, “was formed specifically to EXPOSE that which has been covered up and suppressed – the dark and disgusting world of pedophile trafficking rings. These rings include members from every level of our society and involve unthinkable trauma inflicted upon innocent babies and children – the soul of our nation.”

The group, which is in the process of forming a 501c3 non-profit, was started by Former Navy SEAL Craig Sawyer and their aim is simple — expose child trafficking across the nation and save children from torture.

“Until now, pedophiles have enjoyed a counter-productive level of privacy from the media. That puts more children at risk,” a crowd-funding page for the organization states.

Together, we can work with federal and local law enforcement to help arrest these predators and liberate the child victims.

According to Veterans for Child Rescue, the members of the group make ups a VIPR Team (Veterans Investigating Pedophile Rings), and come from the highest levels of Military Special Operations, Federal Law Enforcement, International Counter-Poaching Operations, The Intelligence Community, The Diplomatic Community and Film & Television.

“This abuse must first be brought to light before it can be cleaned up. V4CR was created to shine that light! We will expose this crisis through joint operations with law enforcement and sharing the truth in an unflinching television documentary-series for the world to see. Through this, we hope to force stronger punitive legislation and create a non-permissive public environment to help reverse this life-shattering trend of abuse,” a statement on the group’s website reads.

As the Free Thought Project has consistently reported, these sickos dominate positions of authority and high-level government roles — worldwide. And when people come forward to expose them, they are met by the Praetorian guard who quickly labels such talk as conspiracy theory and pushes it to the fringe.

The YouCaring page that was set up to raise money for V4CR was pulled without notice on Friday and they were not given a reason, except that it was in “violation of our terms of service.”

While there is definitely no shortage of conspiracy theories on the matter, the facts we do know are horrific enough to cause grave concern.

As the Free Thought Project has pointed out, pedophilia among the elite is rampant. The problem has gotten so bad in England that officials issued an order last month to stop naming streets and landmarks after local heroes and politicians because they could later be exposed as pedophiles.

In February, the Free Thought Project reported on the fact that the police chief recently came forward and confirmed that the former Prime Minister of England, Sir Edward Heath, had raped dozens of children. The department also noted how those within the government helped cover up these crimes.

In December, we reported on the massive child sex ring that was blown apart in Norway. That investigation quickly led to arrests of “51 people, all men, (who) are so far involved in the case. 24 of them come from Hordaland and Sogn og Fjordane. 26 come from other areas of Norway, from Southeast to Finnmark in the north. Among the accused offenders, there is also one Swedish national. Two politicians, one Labor politician from Oslo and a former national Progress Party (FrP) politician from Eastern Norway are involved in the case.” One is also a kindergarten teacher, and four of the 51 arrested were perpetrators in the video evidence collected.

Domestically, however, these higher level arrests are few and far between as anytime ‘the elite’ are mentioned alongside the term ‘pedophile,’ the corporate media, shout down all those who dare pose any questions.

Case in point, former speaker of the house, Dennis Hastert.

In January, admitted child rapist and former speaker of the house who is currently in jail, Dennis Hastert came across our radar after he demanded one of the children he raped pay back the hush money given to him by Hastert — because he broke his silence about the rape.

Hastert admitted to raping little boys, yet he’s in jail for fraud, not pedophilia.

The good news is that because people are refusing to be silenced, the coverage of human trafficking even hit the mainstream last month in a horrifying episode of Dr. Phil. A former victim, who was born into the sex trafficking trade, came forward to implicate high-level government officials as well as police and civilians in their role in the trade.

According to the anti-Human Trafficking group, Polaris, located in D.C., the number of trafficked humans in the US is startling.

It is time to do something about this madness — and V4CR is doing just that. In spite of YouCaring pulling down their fundraiser, the group has started another at GoFundMe. As of Monday, they’ve already raised close to ten percent of their $500,000 goal.

Sunlight is the Best Antiseptic For Corruption.

Matt Agorist is the co-founder of TheFreeThoughtProject.com, where this article first appeared. He is an honorably discharged veteran of the USMC and former intelligence operator directly tasked by the NSA. This prior experience gives him unique insight into the world of government corruption and the American police state. Agorist has been an independent journalist for over a decade and has been featured on mainstream networks around the world. . and now on Steemit