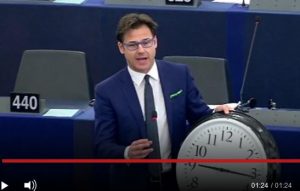 BZ: This is a big dot. No, not because of the Italian “lawmaker’s” rant…

The European Parliament has backed a review of daylight saving time, a move that could stop clocks switching back and forward between winter and summer.

EU lawmakers called for the European Commission to launch a “full evaluation” of the current system and come up with new plans, if necessary.

Supporters of the current system say it saves energy and reduces traffic accidents.

But critics argue it can cause long-term health problems.

Current EU law stipulates a common date in spring and autumn on which clocks must be put forward and back by one hour in all 28 member states.

But opinions remain divided all over the world about the benefits of the system.

Last month, Finland called for daylight saving to be abolished across the EU after a petition gathered more than 70,000 signatures from citizens asking the state to give up the practice.

“Studies that show an increase in road accidents or sleep trouble during the time change must be taken seriously”, the French MEP said, adding that estimated energy savings were “not conclusive”.

Belgian lawmaker Hilde Vautmans, however, said that changing daylight saving could mean either losing an hour of daylight every day for seven months in summer or sending children to school in the dark for five months over winter.

In 2014, Russia switched to permanent winter time after a failed experiment that had put clocks on year-round summer time.