Humans can finally free themselves from their own slavery

By Giuliana Conforto, published on September 17, 2013

Gingantic hole on the sun 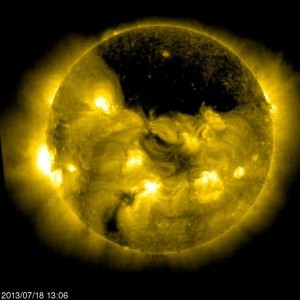 What is the cause of humans’ slavery? Many people would answer the world financial system, the global élite, Bilderberg, Rothschild and so on. Their contribution is surely true, but why do billions of people depend on these few ones who manage the financial system? Because most of them trust the illusory, dominant field, which provides electricity and so supplies all the main means of communications. It is the electromagnetic field, that we can see, observe and easily use. Contrary to what many believe this field is not the only existing one and it cannot explain the sublime organization of the living-forms; it is even ignored by the most sophisticated kind of matter on the planet. This is the organic one that composes our human brain, the white matter that provides the brain connectivity without electricity and it is the biological basis of that synchrony we feel as consciousness, presence, evolution, deep sensation of imminent, epochal changes.

Just looking at governments and churches, all linked to the world financial system, media ignore what is going to occur. Therefore most people ignore the wondrous opportunity they all have to free themselves from the scarcity syndrome that has afflicted the known human history for millennia. Major changes are actually taking place regarding the sun, the Earth and all of us, terrestrials. The sun’s magnetic field is going to flip from North to South into the next few months; it will impact the entire heliosphere – the magnetic bubble, about 1 light-year wide – into which the solar system is imbedded. Solar scientists have recognized that the sun’s powerful magnetic field flips every 11 years. Therefore “don’t panic”, says NASA, “it has already occurred many times”. I do agree; panic is useless and harmful.

However we should realize that this flip is radically unusual respect to all the previous ones.

A giant breach in the Earth’s magnetosphere – 4 times wider than the Earth itself – was officially recognized in December 2008. Through spatial probes, scientists also measured a huge flux of particles – solar wind – entering into the breach and the interior of the magnetosphere. Since then, other big and small cracks in the Earth’s magnetosphere have appeared. So we realized that solar storms can provoke geo storms, possibly affecting the Earth’s atmosphere too. Examining the solar activity and its interaction with the Earth, it was evident the vulnerability of power grids and satellite as well as all what is being done to reduce that vulnerability. Media depict scenarios such as the “end of the world”, while the self-conscious human beings realize that it is rather the beginning, the great opportunity for overall freedom, abundance, harmony and joy.

A new world is possible and it already exists. We couldn’t see it up to now, simply because it doesn’t interact with the electromagnetic light, but it does with the other side of the Force. It is not science fiction. In the 80′s physicists have discovered the “new” Electroweak Force, as the synthesis of two fields: weak nuclear and electromagnetic. While the latter is very well known and broadly used, the former is an invisible nuclear force, involving what we might call the light side of the Force. This is an impetuous, extremely copious flux of particles (Z bosons), which can move the nuclear ones, composing any physical body. This Force actually is UNIVERSAL LIFE and Its light side is what we can feel as self-consciousness, as I wrote in my book Das Sonnenkind (in German), the translation of Baby Sun Revelation (in Italian)

For more than three centuries astronomy was only based on the optical observations made at the ground; it has shown a vast and lifeless universe, a huge “vacuum” that separates the Earth from all the other celestial bodies. At the microscopic scales, the atoms, which compose any visible body, are mainly empty too. Both spatial researches and quantum physics have so shown that “vacuum” doesn’t actually exist. It has huge energies, known as Zero Point Energy. We are living exceptional times at present. According to space experts “the Earth’s magnetosphere is leaking, the solar wind penetrates deeper, whereas in the past it was an efficient shield that deflected charged particles of cosmic origin headed for Earth. Thus our magnetosphere doesn’t protect us any longer.” Why do experts believe that cosmic rays are harmful? Because these are very high-energy particles of “mysterious origin” as they say. And what if the “mysterious origin” were an invisible, parallel universe that appears as “vacuum” to the instruments that just record the electromagnetic field? If it is so, cosmic rays witness a “weak” interaction, a possible cold nuclear fusion between two universes. “We are not entirely safe because weakened field could leave our planet vulnerable to solar winds”, say scientists. Contrary to what they believe, this peculiar nuclear fusion would be highly beneficial, affecting the nuclear matter that composes all the organisms and, mainly, our human minds.

We could finally perceive the parallel universes, i.e. consciously use each one’s white matter that matters for many reasons. One is that its cells – known as glia – occupy 85 percent of the brain, whereas neurons account for only 15 percent of the brain. Another main reason is that, unlike neurons, there is no electrical activity within glia to send messages and information. A good analogue is the under-appreciated dark matter in astronomy. Dark matter is undetectable because it emits no electromagnetic light, as normal matter in the observable universe does. Thus the glia could compose a sort of dark matter that ultimately interacts with the light side of the Force. So we can discover a “new” kind of communication that has always existed and it was evident in dreams, sensations, feelings, eros, emotions, creativity. It could be a communication composed of phonons (sound quanta), “fallen” into the collective unconscious and independent from the photons, the quanta of the electromagnetic light.

If a solarstorm enters the various breaches of the Earth’s magnetosphere, the resultant geostorms can assault the Earth’s atmosphere. In such an event, the results would be planetwide and assault power grids, communication grids, astronauts, military and other satellites and all GPS systems (including military GPS). Most electromagnetic communications would fail too.

What about the people? Safe and free from any military power. No electricity, no weapons!
A return to the past? No, we’ll be back to the future, we’ll finally realize that what astronomers have called “observable universe” actually is a holographic simulation, a 4D FILM, projected on the 4D plasma screen that surrounds all of us, the Earth’s magnetosphere. Such a screen has allowed astronomers to only observe the past and hidden the future, i.e. hidden the REAL UNIVERSE that is INFINITE, INTELLIGENT and ETERNAL. The Earth’s magnetosphere has been the cause of our collective illusion and not at all a “protective shield” as most scientists say.

During the last few years, the 4D screen has been vanishing and the sun’s imminent flip could abruptly accelerate this process. I don’t actually know whether there will be just one planetwide event or a series of small events. Yet we all know that military lobbies no longer succeed in making huge wars, because we, the people, don’t want them any more.

Thanks to the nuclear fusion between the visible and the invisible universes, more and more people will be able to consciously use the light side of the Force, to discern the true from the false and to develop the extraordinary abilities of their own brains, i.e. to use their own hyperspace antenna or brain white matter. As I show in my short video The stars will fall from the sky the vanishing of the Earth’s magnetosphere is not a danger for humanity. It was the WOMB into which we have been imbedded for millennia, the Revelation of the Cosmic Pregnancy that has come to its conclusion. It is therefore the BIRTH of the INNER CHILD, the emergence of all the humans who yearn for a sage, right and abundant world, the evidence that no limits actually exist. We need to use the light side of the Force, UNIVERSAL LIFE This is what we cannot see, but can feel as intuitions, sensations, foresights, feelings, eros, creativity, innovation, emotions. Therefore just observe, love and trust yourselves.