by Claire Bernish, published on The Free Thought Project, on December 14, 2016 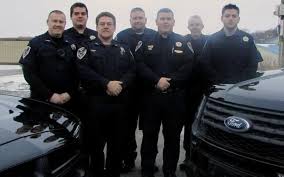 One Indiana town is without a police force after every officer resigned because, they say, the town council repeatedly asked them to “do illegal, unethical, and immoral things.”

“We have had issues with the town board and there are some activities there where I felt like they were serving their own agenda,” former Bunker Hill Town Marshal Michael Thomison told a local Fox News affiliate.

Thomison and the other four officers who comprised the entire police force in Bunker Hill — population 888, according to the 2010 census — decided they’d had enough of the town council’s demands, and on Monday night tendered letters of resignation.

According to Thomison in an interview with the Kokomo Tribune, members of the town council had requested he perform criminal background checks on other council members and that he share confidential information.

“I have had to educate them on the things they were asking from me and explained that I would not take part in any of these actions,” he noted.

Thomison also explained the town reduced the number of reserve deputies from nine to just four and reduced the area they were permitted to patrol. Worse, the former marshal accused the council of curtailing his hours to part time in order to avoid paying his health insurance after he was diagnosed with cancer.

“They came at me and said it is costing the town way too much money because of my insurance and they said we are taking you down to part time,” he told Fox 59.

Thomison plans to file a lawsuit over that issue.

“The town has refused to educate themselves on how to run a town,” Thomison asserted, “they continue to carry out their personal agendas to either run off the police department or make it so that it is impossible to work with or for them.”

Bunker Hill hired Thomison as marshal in 2013, and he told the Tribune he didn’t want to resign, “but the longer I stay there, the harder it is to get anything done. It’s time to step away and do something else.

“The community will suffer, but I can’t continue to stay there when the support’s not there for the department or the reserve deputies.”

Indeed, the officers also cited safety issues in the resignation letters — including that they had to share one set of body armor, making risky arrests even more dangerous.

“I did not want to send someone out there with bad body armor so I would take mine off and provide it to the other officers,” Thomison told the Fox affiliate. “I told them we have to provide this, there is an IC code that explains that and says that the town has to provide that body armor.”

Bunker Hill is desperately seeking officers to fill the void left by Thomison and the deputies, but he told Fox 59 no one wants the job.

“I know that they are scrambling and have contacted some other officers that do not want the position,” he said.

But the police department isn’t Bunker Hill’s only loss — the town no longer has a building department after Building Commissioner Bill Gornto also submitted his resignation Monday, citing issues similar to those of the resigning police.

“Due to the actions of the current town council, I find myself unable to continue in this job,” Gornto wrote, as quoted by the Tribune. “This means you now have to notify the state building department that you no longer have a valid department.”

Even Council Vice President Jim Panther tendered resignation effective at the end of the year, but only cited personal reasons in his decision.

Miami County Sheriff Tim Miller told the Tribune county deputies would fill the law enforcement void in the town until Bunker Hill is able to hire a new force.

Council members offered little comment upon receiving the resignation letters, and Council President Brock Speer noted of the mass exodus of officials, “We’re a little blindsided by everyone resigning, but it is what it is.”

Amazingly enough, without their police force, the town has yet to descend into utter choas. However, there has likely been a decrease in drivers being extorted for window tint, seatbelt ‘violations’, license plate lights, and other entirely arbitrary ‘laws’ designed to remove money from the citizens.