“Engineered Earth” Is Collapsing, Reality Can No Longer Be Hidden

“Engineered Earth” Is Collapsing, Reality Can No Longer Be Hidden

By Dane Wigington, published on Geo Engineering Watch on May 13, 2014

The total failure of the climate engineers is now impossible to hide as the cryosphere begins to implode with blinding speed. The global power elite’s all out geoengineering assault on planet Earth has made an already dire situation much much worse. Though the weather makers have engineered toxic cool downs in some regions, it has come at an unimaginable cost.

By completely derailing the biosphere’s life support systems and compensating responses, the criminal cabal behind the climate engineering have painted us all into a very dark corner. The completely controlled main stream media has done everything imaginable to spin, hide, and otherwise lie about critical unfolding realities around the globe. Just last week mainstream media resurrected the “Monica Lewinsky” story to entertain the masses, how absurd can it get?

The magnitude and immediacy of the challenges we face can not be overstated, it is imperative that all unite in a common cause. All available data indicates the single greatest and most immediate assault against all life is the cataclysmic global spraying/climate manipulation programs. Therefor, it stands to reason that stopping these programs should be our priority. Get educated, arm yourself with credible data, and get in the fight to expose and stop global climate engineering.

Human-caused heat forcing. From the top of the atmosphere to the bottom of the world’s oceans, there’s no safe place to put it. For where-ever it goes it sets in place conditions with the potential to unleash gargantuan forces.

481. Minus aerosols, that’s the equivalent CO2 heat forcing humans have now built up in the atmosphere due to a constant and rapidly rising greenhouse gas emission. By itself, this heat forcing, were it to remain in the world’s atmosphere and ocean system, is enough to melt all of West Antarctica, all of Greenland, and part of East Antarctica pushing sea levels higher by between 30 and 120 feet or more.

Inertia. Namely, the massive inertia in the Earth climate system creating a perceived ability to resist rapid destabilization due to the human insult. It’s the one hope scientists and policy-makers alike pinned on the possibility of bringing human greenhouse gas emissions down in time to prevent radical and damaging change.

Rapid glacier and ice sheet destabilization. What, by 2014, became understood as the new reality, as an ever-increasing number of the world’s glaciers displayed far less resilience than previously anticipated and were set in motion to an unstoppable and catastrophic reunion with the world’s oceans by human warming.

Now, a new NASA study finds that six of West Antarctica’s largest glaciers are in a state of irreversible collapse. These add to a growing tally of destabilized glaciers from Greenland to Svalbard to Baffin Island to Antarctica and beyond which, all together, show that at least a 15 foot sea level rise from human-spurred glacial release is now inevitable. 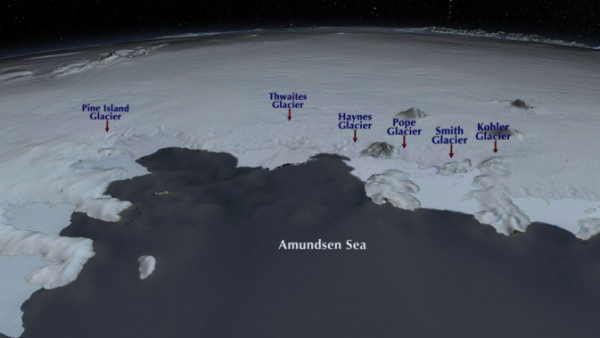 (The locations of West Antarctica’s ‘butcher board’ glaciers — those that are doomed to an inevitable embrace with the Amundsen Sea. Image source: NASA.)

At issue are six massive glaciers representing more than 1/3 of total the ice mass of West Antarctica and what could well be called its entire weak flank.

As early as 1968, this massive section of West Antarctica was listed as unstable. Since that time, human heat forcing has pumped higher and higher volumes of warmth deep into the Pacific Ocean. The warmth pooled in the depths, building, even as it rose up beneath Antarctica. Ocean circulation and Ekman pumping along the coast of Antarctica brought this warm water up from the depths where it traveled along the continental shelf zone to encounter Antarctica’s mile-high glaciers. The warm water did its work, unseen, for a time. Eating away at the bottoms of these glaciers and speeding their slide to the sea. The increased glacial melt and related fresh water outflow put a kind of cold water cap on the Southern Ocean around Antarctica. This cold cap gave the ever-warming bottom waters no outlet to the surface and so the heat concentrated where it was needed least — at the bases of massive ocean-fronting glaciers.

One section of West Antarctica, composed of the six glaciers now listed as undergoing irreversible collapse, was particularly vulnerable to this basalt melt and ocean upwelling heat forcing. For the glaciers there rested on a section of continental shelf well below sea level — extending scores of miles beneath the ice and on into interior Antarctica. As a result, newly undercut glaciers are flooded until they float, creating lift, reducing friction and rapidly speeding the glacier’s plunge seaward. Even worse, few sub-glacier ridges — speed bumps that glaciologists call grounding points — interrupt the more rapid flow of these glaciers once initiated.

By earlier this year, a separate NASA study found that the Pine Island Glacier (PIG), one of the world’s largest glaciers and the most vulnerable ice sheet in West Antarctica, had entered a state of irreversible collapse. Now, the most recent study, led by glaciologist Eric Rignot at NASA’s Jet Propulsion Laboratory, finds that five of its fellows — Thwaites, Haynes, Pope, Smith, and Kohler — are following PIG’s lead.

Rignot’s findings could not be more stark:

“The collapse of this sector of West Antarctica appears to be unstoppable. The fact that the retreat is happening simultaneously over a large sector suggests it was triggered by a common cause, such as an increase in the amount of ocean heat beneath the floating sections of the glaciers. At this point, the end of this sector appears to be inevitable.”

In other words, over the course of decades-to-centuries, these glaciers will disintegrate and slide into the sea until they are no more. Years from now, their names will be a distant memory, reminders of a faded and far better time.

This year, the pace of new announcements for massive glaciers undergoing destabilization or irreversible collapse could best be described as terrifying and unprecedented. And each new announcement brings with it starker implications for both the ultimate pace and scope of global sea level rise. 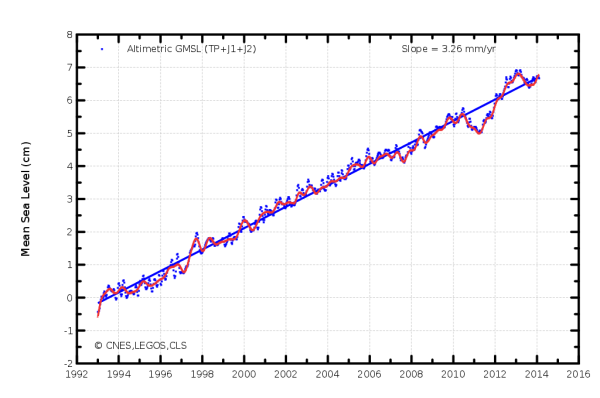 (Current pace of global sea level rise at 3.26 mm per year is likely now set to rapidly accelerate coincident with the rapid acceleration and melt of an ever-increasing number of the world’s glaciers. Image source: AVISO.)

The amount of sea level rise to result from just the loss of the disintegrating section of West Antarctica described in the most recent NASA study amounts to at least four feet. But looking around the world we also find rapid destabilization of more than 13 glaciers encircling all of Greenland with one, the Zacharie Glacier, featuring an ice flow that stretches all the way to the center of the Greenland ice mass. Recent studies also find that the massive glaciers of Baffin Island and the world’s largest ice cap — the Austfonna glacier on Svalbard’s island of Nordaustlandet — are all locked in an inevitable seaward rush.

The total water composed in the moving and destabilized glaciers worldwide is now at least enough to raise world ocean levels by a total of 15 feet. But the inevitable loss of these glaciers tells a darker tale, one that hints that the 23 feet worth of sea level rise in all of Greenland’s ice and the 11-13 feet of sea level rise in all of West Antarctica’s ice may well be locked in to what is a growing daisy chain of explosive destabilization if human greenhouse gas levels aren’t radically drawn down.

In continuing to emit greenhouse gasses, we make the situation ever worse by imposing a heightening heat pressure on glacial systems that will both speed their release and ensure that an ever growing portion of the Earth’s ice ultimately melts. The current forcing though both extreme and dangerous is small compared to the potential forcing should we not rapidly reign in the human emission.

2 Comments to “ “Engineered Earth” Is Collapsing, Reality Can No Longer Be Hidden”