END OF THE EMPIRE: America destroyed within / Death by Bank-ism ﻿

END OF THE EMPIRE: America destroyed within / Death by Bank-ism ( Full Documentary) 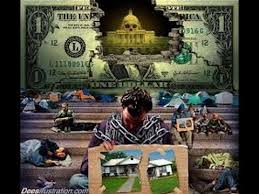 Four Horsemen is a 2012 British documentary directed by Ross Ashcroft. The documentary points out the faults and consequences of our fractional reserve banking system, debt-based economy and political lobbying by banks, which shows this system to be a serious threat to Western civilization. It also points out concerns about the War on Terror, which claims is not fought to spread democracy, but to create larger debts to the banks. As an alternative, the film promotes a return to classical economics and the gold standard on which this country was founded.

Among those interviewed are Joseph Stiglitz, former chief economist at the World Bank, Noam Chomsky, linguistics professor, John Perkins, author and former economic hitman, Herman Daly, economy professor and Max Keiser, TV host and former trader. The film is worth the time to watch and consider.