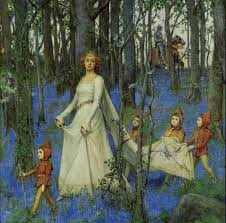 The Edgar Cayce material offers a fresh and fascinating perspective on the supernatural realms and its inhabitants, exploring angels, brownies, fairies, and more.

The Cayce readings show us that Fairies, elves, and gnomes are beings affecting the world but remain mostly unseen. Brownies are actually of the family of fairies. Nymphs are female elves. Sprites are fairies of a particularly pleasant appearance and disposition. Pixies are mischievous fairies. Folklore describes them all as magical beings of diminutive human form. Gnomes are usually described as shriveled little old men that inhabit the interior of the Earth and act as guardians of its treasures.

It would seem that the young people today are closely “attuned to the infinite,” as Cayce put it, and are therefore interested in books and movies about the normally unseen fairies, elves, and gnomes.