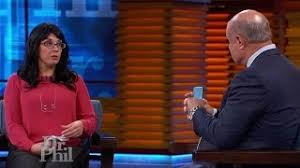 Kendall claims the world of sex trafficking is the only life she’s ever known. The young woman claims her parents gave her – at birth – to a person she refers to as “the man who owns me.”

TELL DR. PHIL YOUR STORY: Have a headline-making story in a small town?

Claiming she was forced to have sex from an early age, Kendall says, “One of my first memories was thinking that it was normal for men to be fondling babies.”

She claims as part of an international sex trafficking ring, she traveled the world and was both sexually and physically abused by “extremely rich and prominent members of society,” her entire life – until she escaped.

“Since I left, everything has been so hard, and the only one who can help me is the man who owns me.”

Why does Kendall say she feels like no one will believe her story? Tune in to Tuesday’s Dr. Phil. Find out where you can watch here.