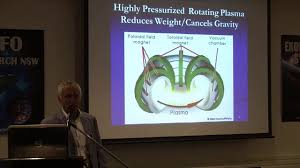 This presentation was recorded at the UFO Research (NSW) Incorporated meeting held at Ryde Eastwood Leagues Club, NSW, Australia on the 6 August 2016. This lecture presents key documents and whistle-blower testimony to reveal the hidden development of antigravity spacecraft, successfully developed in pre-WWII Germany and Italy.  This technology is claimed to be reverse engineered by the USA and its allies, including Australia. The development of a Nazi German Secret Space Program in Antarctica during the 1940s, and the evolution of the US Navy’s Solar Warden Space Program from the 1950s to 1980s.  Both of these highly classified programs have led to subsequent bases and colonies being established on the Moon, Mars and other celestial bodies. Dr Michael Salla is the author of the Amazon.com best seller, Insiders Reveal Secret Space Programs and Extra-terrestrial Alliances (September 2015).  He has held academic positions at the Australian National University (ANU), American University (Washington DC), Queensland University and George Washington University.  He has been interviewed for the Ancient Aliens, and is a regular guest on Coast to Coast AM Radio (USA). Michael’s website is: exopolitics.org