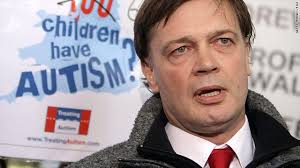 While other media outlets remain silent on this breaking story, we continue our investigation into the CDC Whistleblower Dr William Thompson… and as a result of Thompson’s statements a collective voice is accusing the CDC of fraud.

Initially Dr. Thompson contacted Doctor Brian Hooker stating the CDC has been hiding self-incriminating evidence for over 10 years now and that he WITNESSED the CDC remove large numbers of young black boys from their case study, because they showed a 340 percent SPIKE in autism after vaccinations.

We’re now turn to an international leader on vaccinations for some answers. In fact, it was HIS research that started a lot of this talk years ago. Our guest today is Dr. Andrew Wakefield one of the first researchers to link vaccines to autism.

Shortly after he first spoke out against vaccinations, the Lancet journal, ABC’s Good Morning America and even the British Medical Journal basically cut him off. The medical community did everything they could to distance themselves from him, while ABC did everything they could to vilify him. It’s been several tough years, yet Doctor Wakefield’s research still reverberates throughout doctors offices and households around the nation and he’s here joining us today to discuss the CDC Whistleblower and his own research.