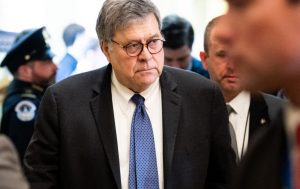 The Justice Department signaled Saturday night it may intervene against local governments that are cracking down on religious ceremonies during the pandemic, warning that action could come as early as next week.

“During this sacred week for many Americans, AG Barr is monitoring govt regulation of religious services,” Kupec tweeted. “While social distancing policies are appropriate during this emergency, they must be applied evenhandedly & not single out religious orgs. Expect action from DOJ next week!”

The statement comes as numerous municipalities across the country have been reportedly taking actions to stop churchgoers from celebrating Easter together, including in Louisville where the mayor threatened to track license plates and fine anyone who attends a public ceremony.

“An American mayor criminalized the communal celebration of Easter,” U.S. District Judge Justin Walker wrote while issuing a temporary restraining order. “That sentence is one that this Court never expected to see outside the pages of a dystopian novel, or perhaps the pages of The Onion.

”The Mayor’s decision is stunning. And it is, ‘beyond all reason,’ unconstitutional,” the judge added.