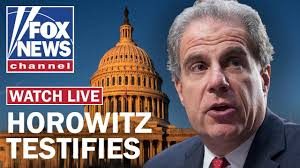 Inspector General Michael Horowitz is set to be grilled by the Republican-led Senate Judiciary Committee after his report cleared the FBI officials who began the Russia probe of biased conduct, but did indicate improper FISA filings in the surveillance of ex-Trump campaign aide Carter Page.